Mayonnaise is so much a part of Western culture we seem to put it in everything. Or everything in it. From salad to fries to burgers to pizza, turning it into different sauces for a roast, anything. For this amount of mayo, there’s got to be a large production of the condiment. And so there is, and it’s always a whitish-creamy looking jar of goodness.

And maybe you try and make your own mayo at home, completely in charge of the ingredients. And it comes out yellow ! Why is store-bought mayo white ? And why did that home-made mayo end up yellow ? Which one is right ? Let’s take a look. 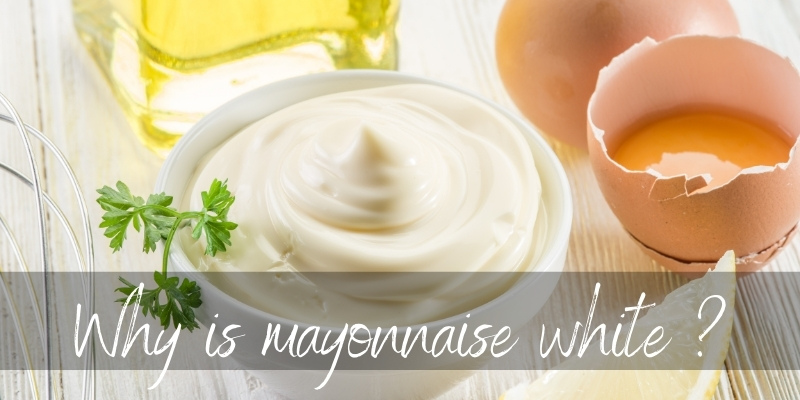 Why is mayo white ?

Store-bought mayo is white because it contains a small amount of egg yolk – about 5% as the law requires. The rest can be egg white or water, along with at least 70% vegetable oil. Commercial mayonnaise is beaten with strong blenders and mixers, incorporating much more air than a person can hand-mix at home with a whisk.

The result is less pigment from the yolk, and more air from the mixing. A whitish color seems to be the standard for commercial mayonnaise, and if you’ve been raised on it that’s the color you expect. In truth, mayonnaise is a creamy, pale yellow.

But first let’s take a look at why commercial mayo ends up white in the first place.

When you’re making mayonnaise at home, you beau it by hand, with a whisk. Or maybe you use a mixer. Either way, it still ends up distinctly yellow looking. This is because the amount of mixing you’re doing does not incorporate as much air into the emulsion as a strong mixer or blender does.

So if you want your own homemade mayo to be white, or at least paler than usual, make sure to use a good mixer or blender, don’t do it by hand. This way you create tiny, tiny air bubbles that will make the mayonnaise appear paler.

Another reason commercial mayo is so white is because it does not, in fact, use as much egg yolk as you do at home. The pale yellow color comes from egg yolks, and the more you use, the better the mayo. But commercial mayo is not there for ‘better’, it’s there for convenience and turning a profit.

So, the common recipe for commercial mayo includes a single egg yolk, and various fillers. We’ll get to that in a minute, But for now, let’s explain the difference between a single egg yolk and, say three, all beaten with the same mixer.

So what are those fillers ? Well, for the most part it’s the egg white. Normally you don’t make mayonnaise with whole eggs, because you cannot whisk it well enough at home to emulsify and fluff up. But an industrial mixer can.

The result is a fluffy, definitely pale-looking mayonnaise. Remember French merengue ? It’s the one where you don’t temper the egg whites at all, you just whisk them. So that contributes to how white the mayo is, imagine folding a single egg yolk into some merengue.

You may be wondering why anyone would add water, of all things. Well, to cut costs, and also to cut calories. Mayo made with some water instead of more egg yolk results in a lower-calorie sauce. It still has a lot of oil, so it’s still high-calorie food. But it’s lower than the usual one.

And water, being very much, uh, transparent, does not add any color, and instead only makes the entire emulsion even paler. This translates into a very translucent mayo when you spread it on something, but in the jar it looks white.

Don’t worry, not all mayo companies do this and when they do, only a small amount of water is added. Just enough to keep everything from splitting.

Despite its color, mayonnaise is not dairy and does not normally include any milk-based products. There are Portuguese and Spanish versions that incorporate some milk, but it’s a small amount and this recipe is not the one commonly used in international dishes.

So in short no, mayo is not dairy. Eggs are not dairy either, even if they are often placed in the dairy section. That has more to do with tradition and need to keep the eggs cold than anything else.

Replace the egg with aquafaba for vegan mayo

If you want a completely vegan mayo, all you have to do is replace the eggs. A common option is to use aquafaba instead of eggs, and possibly add more oil to get a good, stable emulsion. This will be a very white mayonnaise, unless you’re using an oil with a lot of pigment, like olive oil.

Why is my home-made mayo so yellow ?

Most recipes for homemade mayo require several egg yolks which add a lot of colors. In countries that had a significant French influence, a teaspoon or two of mustard is added to help the emulsion along, and this adds a bit of color as well.

And finally, homemade mayo is often simply whisked with a whisk, or even beaten with a wooden spoon. This means a much thicker, yellow-looking mayo that often ends up much more flavorful than any store-bought mayo.

If you want your mayo to fluff up more and become paler, use a hand mixer on a medium-low setting, and slowly incorporate the ingredients. As long as you have something acidic like lemon juice, a dash of vinegar, or mustard at your disposal, you can always same the mayo from splitting.

Having one of the yolks hardboiled – from a whole egg – really helps keep everything together.

Yes, mayonnaise can go bad but it takes a long time to do so. First you will see the mayo splitting and moisture separating from the mass. Over time, as the oil in the mayo turns rancid the mayo itself will start to smell sour, and a bit like detergent or cilantro.

If you always keep mayo in the fridge you’re very likely to finish eating the entire tub or jar before it goes bad. Do not store mayonnaise on the counter, at room temperature, for more than a couple of hours at a time. It will split and turn rancid much faster.