Let’s face it, the French know their decadent treats and everyone loves them for it. And when to breakfast, they’ve got it down pat. SO much so that breakfast with French elements seems to be everyone’s dream. Take French toast for example. Instead of plain, dry toast, you get crispy yet creamy delicious goodness that you’re not sure should even be allowed on a breakfast plate, it’s so rich !

So you try and make some at home. But it turns out soggy, especially if it’s your first few tries. That’s okay, French toast is not meant to be soggy but we can help you figure out why it turned out like that, and how to step up your breakfast game. 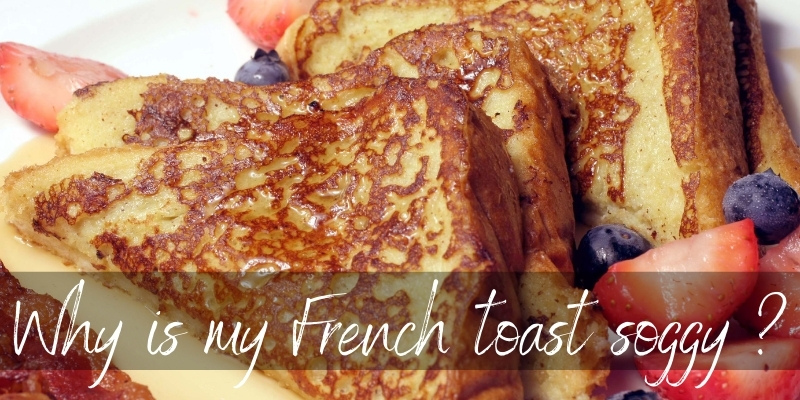 Why is my French toast soggy ?

French toast ends up soggy when the bread soaks up too much of the mixture, or there is too much milk in the custard, you haven’t cooked the toast enough, or all of the above.

The problem is that the bread itself does not get to cook through, and instead remains a moist slice. This means the outside edges do not end up crispy and cannot form a proper barrier.

There is no magic formula for how to get it perfect, but here are the top 4 reasons your French toast is soggy.

1. You’re soaking the bread too much

When the French toast is soggy, the bread is too wet. When you soak the bread in the custard you need to let it sit there for about seconds on each side, trusting that it will draw enough moisture and flavor.

If you let it soak too much, until you see it’s truly moist, it will end up with a completely soaked slice of bread. Way too wet.

Read also: Why Are My Pancakes Dry ?

Even if you’re soaking the bread just enough, if the slice is too thin you’re ending up with soggy toast anyway. Although you may be tempted, do not use plain white toast for French toast. It’s flimsy, thin, very airy, and does not have enough crust and body to hold up to the custard.

You need a denser bread with more body, and the slice should be strong enough to hold together when you finish soaking it. We’ll get to what kind of bread to use in a minute.

3. You’ve added too much milk to the mix

A very common problem is adding too much milk to the mix. Milk is an important element of French toast, but it’s not necessary to add equal parts eggs and milk. Add less milk than eggs, only to thin out the custard a little.

Otherwise the toast will soak up the milk and the egg will coat the outside just a little. The result is, of course, a soggy toast.

We suggest using full fat milk to make sure it’s not too watery. And if you’re feeling naughty go for heavy cream instead of milk. Might as well go all out.

4. You didn’t cook the toast enough

If you’re cooking the toast and it starts to burn and smoke before it’s even done cooking, you’re likely going to want to remove it from the heat. The problem is that it’s not done cooking, so it’s soggy.

Tips on getting the perfect French toast

There is no magic formula that will guarantee a perfect French toast every time but there are a few things to look out for. All of them combined make for a magnificent breakfast experience, so check them out.

Get a sturdy, spongy bread

Good bread is the foundation of a great French toast. You need something sturdy, preferably day-old. Look for something like French or Italian bread, or brioche. The bread needs to have a good crust (not soft), and it needs to be substantial when you touch it. No airy, light bread for French toast !

If it’s an eggy bread even better, it’s going to provide a good texture. A no-egg bread will provide a creamier inside.

Slice the bread yourself, because no store-bought bread comes sliced that thick. A slice that’s too thin will not have a good enough crust to creamy inside ratio, resulting in a soggy toast. 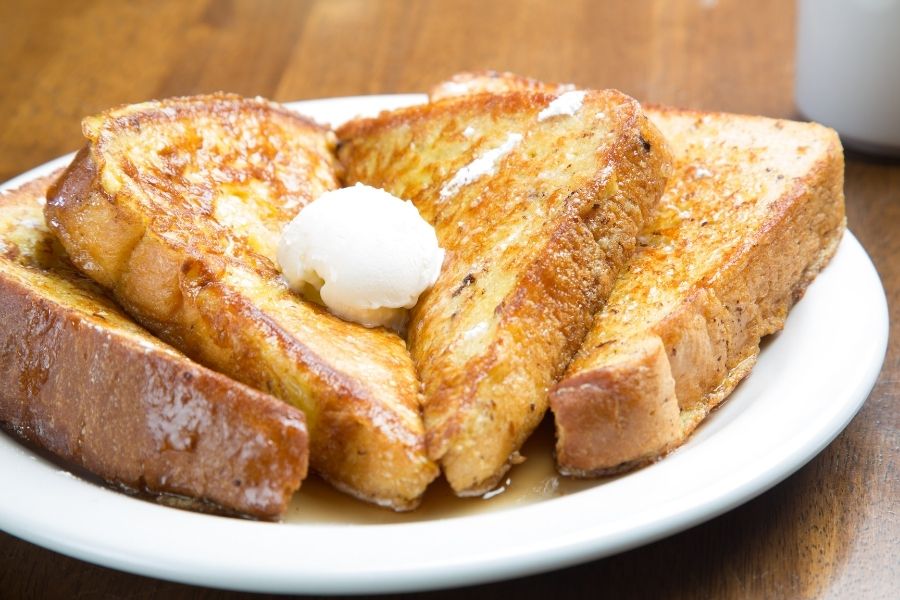 Use both butter and a neutral cooking oil

If you’re cooking with just butter you’ve noticed it starts to burn and smoke before you’re even done cooking. This is a common problem and probably why you feel like you take to pull the toast off the heat when it’s still soggy.

What’s happening in the milk solids in the butter and burning, and they will stick to your toast and give it a bitter flavor. So, swap half your butter for neutral cooking oil. Regular vegetable or rapeseed oil is fine. No olive oil ! Coconut oil may work great if you have it.

Don’t create a layer of fat and oil, use very little, fry the toast, wipe clean with a paper towel, and use a fresh round of butter and oil.

Don’t be afraid of a bit of cinnamon and vanilla

If you’re adding maple syrup on top of your toast you may think there’s no need to add anything else to the batter. But the thing is, you give the batter some extra oomph if you throw in a pinch of cinnamon and a bit of vanilla extract.

Adding brown sugar will yield a caramelized crust, while powdered sugar will get you a nice, crispy finish.

Always cook French toast on a medium heat. Just like a pancake, French toast needs medium heat to cook evenly. Cook for about 3 minutes on each side and you should have crispy outsides and a creamy interior.