Were you looking to make the absolute best salad dressing out there, only to find your ginger has a blue hue to it ? This happens to those who don’t eat salad too, don’t worry.

In fact, blue-tinged ginger is a thing. Whether it’s by accident or on purpose, ginger can and does turn blue. We’ve asked around and found out why it does that, and what that means for you. Can you still use ginger once it’s blue ? Find out here ! 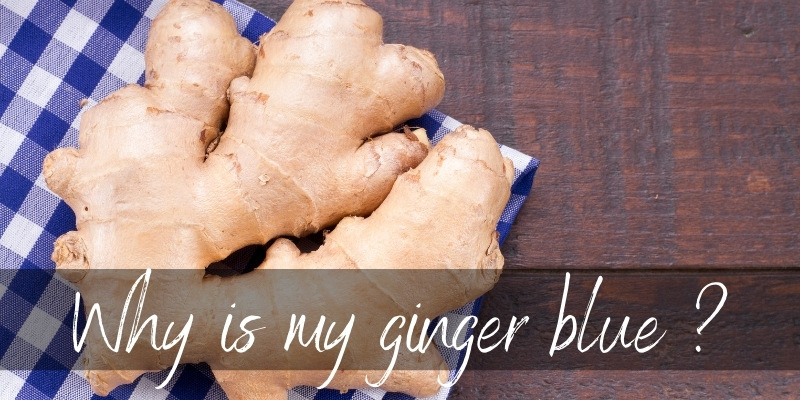 Why is ginger blue ?

Some ginger types will turn blue if stored in a very cool place (like the fridge) for several days or weeks. This is a natural reaction, the same way garlic sometimes turns blue and is still safe to eat.

Sometimes the blue in the ginger is a vague hue, sometimes it’s a clearly blue ring on the outside. It doesn’t have to be the fridge, though. It could be a very cold pantry, or it could be where it was stored before you even bought it.

If you’re wondering why it turns blue and not something else, it’s because ginger contains anthocyanins. Some types have more than others.. They sound weird, but they’re an antioxidant and pigment in every berry and red fruit or veggie. Red cabbage, purple carrots, red onions, cherries, blueberries, cranberries, you name it.

Anthocyanins go from red to blue. They’re red when the fruit or vegetable is acidic – such as red onion. And they turn blue when the pH is alkaline.

When exposed to the cold for a long period of time, ginger changes its chemical composition somewhat. It becomes more alkaline, and thus takes on a vaguely blue tinge around the outer ring.

Blue ginger is safe to use, just milder in taste

If your ginger has done this, don’t worry. You can still use it. As long as there is no mold, it still smells fine, and it’s not slimy then it’s still safe to use in all the ways you can use ginger. Sure, it might be a little odd to look at, but it’s still okay.

One thing though, ginger that has turned blue is less acidic, which also has an impact on its flavor. It’s still there, but it’s milder, and not as spicy.

Do not confuse it with Indian or Hawaiian ginger

Okay so there’s different types of ginger out there, apparently. Most ginger we buy comes from China or India, neither of which turn blue when exposed to the cold.

There are ginger types derived form the main one we all know. There is a Hawaiian blue ginger, which is crossed with an Indian blue ginger. The Indian ginger is named galangal, while the Hawaii one is simply named blue ginger.

Why is my ginger pink ?

You might’ve noticed that your ginger has turned pink. Yes, one moment it was blue and now it’s pink. Why ? Well, the pink is still because of the anthocyanins. When exposed to very acidic items, like vinegar or lemon juice, ginger will turn pink.

This is why Japanese sushi ginger – gari – is a nice, soft pink. It’s pickled ginger, and as such it is exposed to vinegar. This can also happen to galangal or Hawaii blue ginger, if exposed to something acidic. Keep in mind that they may develop a brighter color.

When you slice into a thumb of ginger, you know what you should look for. Nice, fresh smell with a pale yellow flesh and a slightly darker ring towards the edge.

If you’re buying a ginger hand from the store, make sure it’s not the largest one. A very large one will often be an older, more fibrous and less juicy one. It’ll also be much less spicy.

Ginger knobs should be relatively smooth, without too many ends that look dried, as if they were broken off another piece. IF the ginger is particularly shiny and smooth, it’s a very young ginger. This is good if you’re making gari, but maybe not the best if you want some spice.

Opt for a slightly older, less shiny and smooth hand. For your own sake, look for one that will have less nooks and knots. This will make peeling and cutting easier.

How do you know if ginger has gone bad ?

You’ll notice your ginger has gone bad when there is actual mold on it. But you can notice it’s time to throw it out before that. As it sits on the counter, ginger will dry out. From a fresh, relatively smooth-skinned rhizome to a wrinkly, matte piece of ginger.

If you’re keeping ginger in the fridge, you might think it will keep for longer. In truth, ginger on the counter can keep up to two weeks. And you’re definitely going to use up all of it in two weeks. If you have ginger, you’re probably using it for tea, a sauce, or something similar.

And that’s pretty much it about blue ginger ! It’s really an interesting reaction to the cold, and not all ginger knobs do that. Some end up having more anthocyanins than others , and they have an easier time turning blue.

As long as there is no mold and it doesn’t smell funny, blue ginger is still safe. But if you’re feeling unsure then you can throw it out and buy another piece. If you’ve got any other food curiosities be sure to check the related articles below, we’re always adding more food facts to make your life that much easier.

Why Do People Put Rice In Salt ? We Found Out !

What Does Carob Taste Like ? Here’s How To Use It

Difference between carob and chocolate – 4 things to know

Here’s What Lemongrass Tastes Like, And How To Use It

Is Lemongrass Edible ? Read This Before You Try It