Going to the movies is always a fun experience, even when the movie itself isn’t all that great. Why ? Because you’ve got the buttery magic of popcorn, that’s why ! This is something almost no one skips when going to the movies: a generous helping of popcorn, and some soda to wash it down.

But why is popcorn a movie snack ? When did these two become so entwined you can’t think of one without the other ? When and how did this happen ? Now, in the middle of summer blockbuster season, let’s find out ! 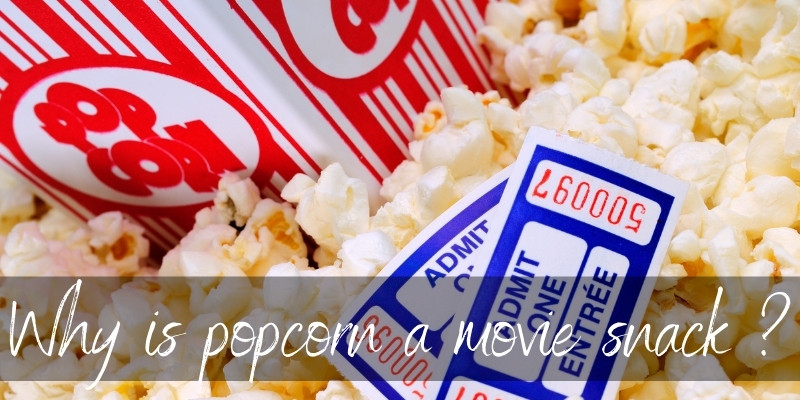 Table Of Content show
1 Why is popcorn a movie snack ?
1.1 Why popcorn and not another snack ?
2 Why is movie theater popcorn so good ?
3 Can you make popcorn from any corn kernel ?
4 Why is my popcorn soft ?
5 Why doesn’t my popcorn pop ?

Why is popcorn a movie snack ?

Popcorn became a movie snack because it was the cheapest snack that cinemas could offer during the Great Depression. It used to go for 5-10 cents per bag, and nearly everyone could afford this little treat. It was both a snack and a small luxury that could let people relax and forget about their problems for a little while. The popcorn itself wasn’t the luxury, rather going to the movies was and it was a beautiful distraction.

In fact, popcorn and cinema have a bit of a love-hate relationship. We said during the Great Depression popcorn was already established, but the road to get there was very bumpy.

Originally, back in the ’20s popcorn was more of a nuisance. Cinema owners were worried the audience would be distracted from the movies, and the cinemas themselves would require more cleaning. And there were right about that, popcorn does tend to make a mess everywhere and you always see someone sweeping the floor after each movie is shown.

But, one thing cinema owners couldn’t ignore was how consistently and reliably moviegoers came in with popcorn, and how much they loved to snack on the little puffs. They also saw the profit of selling their own popcorn, thus reducing movie ticket costs. So they did exactly that.

Cinemas went from seriously disliking popcorn to selling it themselves, doing a full 180 once they saw the profit. And it was a very good idea, because more people flocked to see movies and get their share of popcorn. This went on for so long it’s been nearly a century of serving popcorn at movies if you think about it.

Nowadays the idea of going to the movies without a snack is almost unheard of, and most of the time it’s popcorn.

Why popcorn and not another snack ?

You may be wondering why popcorn was the preferred snack, and not something else. Initially it has to do with how absolutely cheap the corn kernels were. They were cheap to make and buy and then pop, yielding a good profit. And in time, people got used to popcorn and came to expect it.

Another thing popcorn’s got going for it: it’s not really that distracting. Sure, it distracts you a little but not as much as other snacks. Like, say nachos that you need to dip in sauce. Really, popcorn is a convenient and very same-y snack that you don’t have to think about when eating.

You can get it savory and you can get it sweet, so you can satisfy both cravings. And unlike other snacks, it’s not terribly loud. It’s not quiet either, but it’s not the loudest thing ever.

Why is movie theater popcorn so good ?

Movie theater popcorn has the basic butter and salt combo, with heavy emphasis on both. This makes for an almost addictive flavor in popcorn, since salty snacks just seem to disappear from the bag with lightning speed.

If you were to get a plain, just salted popcorn, you probably wouldn’t love it as much. It’s definitely dry by comparison, and you’re always going to reach for that soda cup.

An interesting point about movie popcorn is how it rarely gets soggy, or soft, despite having butter. Ah, but there you have it. That’s not really butter, it never is. Real butter has some degree of moisture in it, and using real butter would eventually climb popcorn prices higher than they are now.

Movie popcorn actually has vegetable oil with flavoring in it, butter flavoring to be precise. Coupled with salt, the overall effect is very similar to salted butter and there you go, the perfect butter.

If you’re looking to make your very own salted butter popcorn and really want to use butter, please clarify the butter before you do this. You remove the moisture and only leave the milkfat behind, leading to may less chances for soggy popcorn.

Can you make popcorn from any corn kernel ?

No, not all corn kernels produce popcorn because they don’t have the right moisture content inside the kernel. You need a kernel with 14-20% moisture inside, on order for it to actually pop. Otherwise it’d just burn.

Here’s what actually happens when you pop popcorn. The kernel is heated, and that heat created pressure because the moisture inside it suddenly expands. That is the white, starchy part of the popcorn.

The kernel itself has to be hard enough to resist the pressure for a time, and the moisture inside the kernel has to be just right, otherwise it won’t burst.

For example sweet corn is harvested when immature (milk stage), and even dry it has much more moisture than necessary for popcorn, and kernel itself isn’t hard enough.

Why is my popcorn soft ?

Popcorn can end up soft if you’ve let it sit for too long, or you didn’t let the steam escape when you’ve popped it.

In the case of microwave popcorn this means you can’t let it sit around after the popping ahs subsided. You’ll always have a few unpopped kernels, so don’t wait around for all of them. That’s how you burn the rest of the popped ones. The more you want. the more the rest burn and the steam makes them soggy and soft.

And in case you’ve made your popcorn perfectly – microwave or stove-top – don’t let it sit on the counter for an hour before you remember it exists. Always, always make your popcorn a couple of minutes before polling down in front of the TV. The popped kernels will absorb moisture form the air and you’ll get stale, soft, somewhat chewy popcorn.

Why doesn’t my popcorn pop ?

Popcorn doesn’t pop when the moisture content inside the kernel is off, and it usually means it’s too low. This means old popcorn kernels won’t pop as well as fresh ones, though it also depends on how old the kernels are. Some kernels can dry out within a couple of months, some can accumulate more moisture as time goes on.

Please note that if you’re making microwave popcorn you will always have a few that will not pop. That’s okay, they never end up popping anyway so don’t wait around for them.

So if you’ve bought a big bag of popcorn kernels and they’re not popping, you can take a handful and add a bit of moisture via water. This means sealing the kernels in a small jar with a small amount of water, until the water is absorbed (about a day or two). Be sure to shake the jar so all kernels are evenly wet. How much water and how much corn depends on how exact you want to be.

Jennifer Murch recommends you add a teaspoon of fresh, cold water for every cup of corn kernels. If the kernels end up too wet, pour them onto a baking sheet into an even layer and let the dry out. Take a small sample and try to pop them when you think they’re ready.