Zucchini flowers may not be the first thing you think of when we say ‘summer’ but they’re a fresh, delicious summer treat and it’d be a shame to miss out on them. For the longest time we had no idea zucchini had flowers, nor that you could even buy them. They’re a bright yellow burst of flavor, and you can use them up however you please. So let’s take a closer look at those pretty flowers. 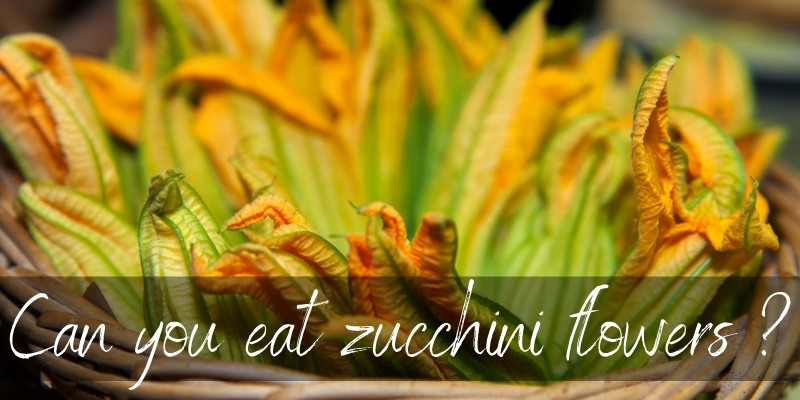 Can you eat zucchini flowers ?

Yes, you can eat zucchini flowers. They are completely edible both raw and cooked, though the most common way to eat them is deep fried in some batter (like tempura or egg and flour).

The flowers on zucchini are actually the precursors to the zucchini vegetable, so whenever you see flowers for sale, those are actually zucchinis that have never developed.

In some cases the flowers develop along with the zucchini themselves, and this means both can be used. But once you cut off the flowers, the zucchini will no longer develop on its own.

Can you eat the stems of zucchini flowers ?

Yes, you can eat the stems of zucchini flowers. Those are tiny zucchini vegetables that are just starting to sprout, so they’ll be very soft and tender. You can choose to discard the stems if you want your meal to only be the flowers. The stems are usually good when deep-fried, though you can also bake the entire flower with the stem attached.

Zucchini flowers have a very mild flavor, very reminiscent of the zucchini itself. This means that if you end up flavoring the flowers with something, they will soak up whatever you throw at them.

When raw zucchini flowers tend to taste a bit earthy and green, much like the zucchini itself.

Where do you find zucchini flowers ?

The most likely place to find zucchini flowers is at a farmer’s market. These flowers are picked off the zucchini plant itself in the early morning, and may then be sold.

Zucchini flowers are very difficult to find in supermarkets, because they’re more of a niche product and they’re a bit fragile. They don’t last a long time, even if you keep the stems on. And they’re not good for long-distance transport, as most vegetables end up going through.

So your best chances at finding zucchini flowers are:

How do you prepare zucchini blossoms ?

Once you’ve got your hands on some nice zucchini flowers, it’s time to cook them But first we have to prepare them. If you’re harvesting the flowers from your own garden, make sure to harvest them in the morning. This way they’re wide open and you can easily check them for any dirt or bugs. It also makes stuffing them easier.

You can rinse zucchini flowers in cold water if you want, but be sure to shake them dry afterwards. They will easily wilt if you keep them wet. This is the part where you decide if you want to keep the stems on, or you want to cook those separately, or throw them out. We recommend keeping them and cooking them, even if separately.

You can use zucchini flowers exactly as they are, provided they’re clean and bug-free. This means you can roughly chop them and throw them into a salad. When raw these flowers have a slight earthy flavor, and the middle may be a bit crunchy. The stems may be a bit crunchy as well, the same as a small cucumber. 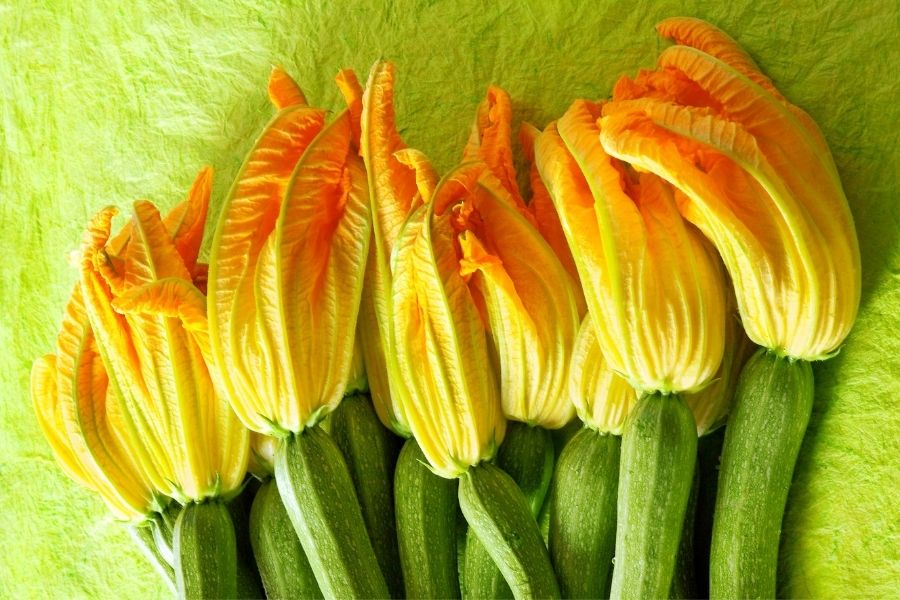 By far the most common way to prepare zucchini flowers, this method is also the tastiest. Deep fried anything is always going to taste great.

You’re going o need the zucchini flowers clean and dry, a pot of hot oil, and a flour and egg station. Dredge the flowers in a bit of flour then drag them through some beaten eggs. You can season both the eggs and the flour. A second dredging through flour and egg is optional.

When the final egg layer is done, dunk the flowers in the hot oil and fry them until they start to get a light golden color. Don’t crowd the pot, the more flowers you cram in there the more they will stick together and you end up with a mess.

These are best served immediately after frying, or, you can keep them hot (and slightly crispy) in a low oven. This also lets you make several batches without ruining the first.

For a twist on this, try switching the batter with a simple tempura one, or switching to panko crumbs, doing a beer batter, whatever kind of batter suits your tastes best.

You can try stuffing the blossoms as well

Another method of cooking these beautiful flowers is to stuff them, and then deep-fry them. Whatever you stuff them with is up to your, but the flowers have to be perfectly closed once they’re stuffed.

You could stuff the zucchini flowers with shredded cheese, or chop some fried bacon and stuff that into the flowers. A soft, creamy polenta works just as well, as do mashed potatoes (or sweet potatoes).

If you decide to use meat as a stuffing, please don’t use it raw. The flowers won’t be exposed to heat long enough to cook a piece of chicken. Instead cook the meat before stuffing it, and you’ll be fine.

And in case you want to use mushrooms, cook them before stuffing as well, because raw mushrooms release a lot of water as they cook. You don’t want water leaking out of the zucchini flowers and getting into the hot oil, it’ll pop everywhere.

So, first get your fresh, clean, dry zucchini flowers. Prepare the stuffing of your choosing. Prepare a batter to dip and then fry the blossoms in. Heat up some oil in a pot to fry the flowers.

When the stuffing if done (and cool enough to handle), spoon about 2 teaspoons’ worth into the flower. You should have enough room to fully close the flower (twist it). Dip the sealed flower in the batter of your choosing, then add it to the hot oil. Don’t fry more than 3-4 at a time, so the flowers don’t stick together.

Tip: stuff all of the flowers first, so you have one less step to go through. Then, dip 3-4 flowers, fry them, and then dip another 3-4 and fry those until you go through all the flowers.

And that’s pretty much it. You can now serve some really interesting appetizers at the next family gathering, and you can even go wild with the stuffing. If the stuffing can go into ravioli or tortellini, it can go into zucchini blossoms.