Pork may not be the number one meat on most people’s list, but it sure is one of the cheapest ways to bring meat on the table. And we’re not talking about processed pork, like bacon, ham, some sausages, and so on. We mean actual cuts of pork meat.

Why is pork so cheap ? And why does it smell so bad sometimes when you cook it ? These are actually two good points we want to address, so let’s go. 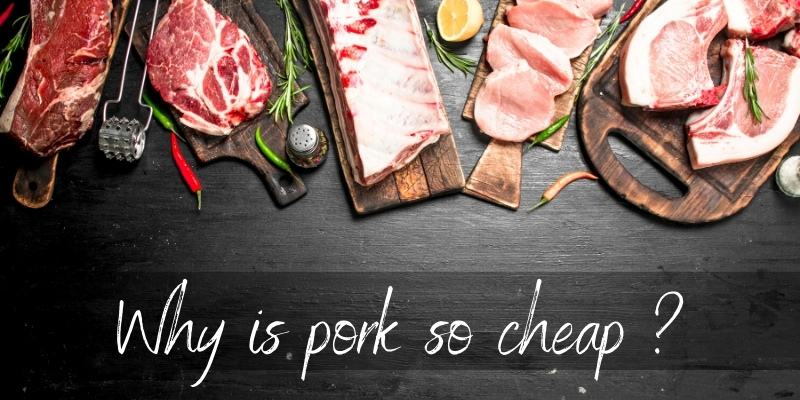 Why is pork so cheap ?

Pork is cheap due to a combination of easy breeding, easy rearing, cheap feeding, and they quickly grow large enough to be slaughtered. All in all pork seems like a very cost-effective farm animal, and you’re very likely to reach for pork if you can’t get beef.

This is mostly a good thing in our opinion. While not everyone can afford beef, or not as often as we’d like, some form of protein still needs to be on the table. For most people, this means meat. And there’s nothing wrong with getting pork when that’s all you can get.

And if you’re someone who really loves pork, then you’re likely very happy about the comparatively lower prices. Now let’s take a look at why pork tends to be cheaper than any other meat.

1. Pigs breed quickly, have many piglets

When you raise an animal for commercial use, you need to take into account how easily the animals will spawn, aside form feeding costs and housing.

Pigs breed very easily, and produce more than one offspring. Usually the sow is pregnant for 16-17 weeks, and gives birth to a minimum of 10 piglets if there are no issues during pregnancy. Sows can give birth twice a year, since the piglets become independent fairly quickly. 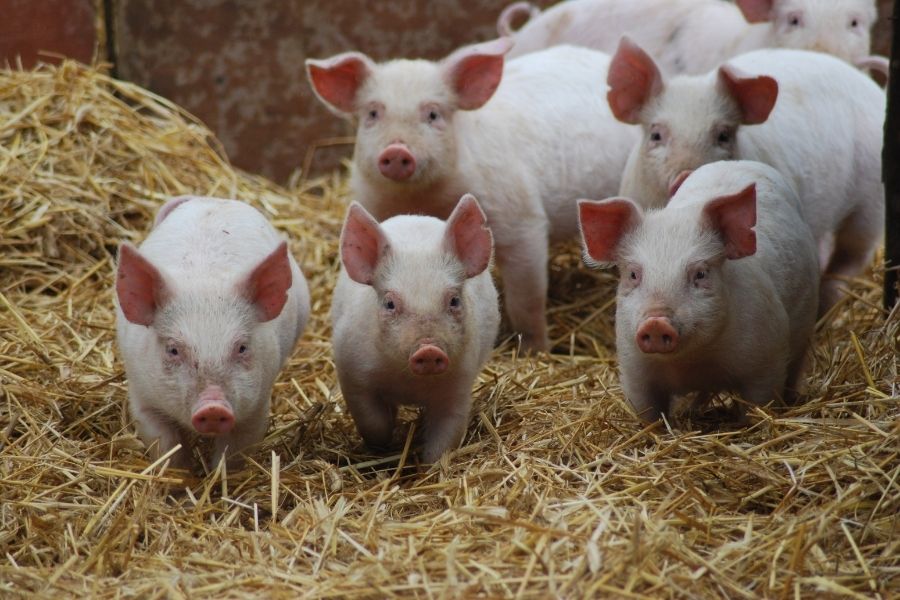 This means that if you start your farm with 1 sow and 1 boar, you can easily get 2- pigs by the year’s end. Of those 20 pigs, some will be sows, some will be boars. Each new sow will produce litters twice a year and so on.

You can see why a pig farm is a cheap initial investment, since you don’t need that many animals to start with. And many piglets mean many pigs to slaughter, since this usually takes place right before the pig reaches puberty. In America the standard is 220 lbs/100 kg for a pig to be eligible for slaughter.

2. Pigs are easy to feed and grow quickly

As pigs are omnivorous animals they are incredibly easy to feed and they grow and fatten very quickly. Some farms specialize in their pigs, rearing ones fed with a specific food type to get a better meat taste. But most pigs are raised with cheap feed.

If you’ve ever lived on a farm you know that pigs can get a vast array of food, like dinner scraps, greens, grains, grass, fruit and veggie peel, anything.

Once again, this means that pigs are a relatively cheap animal to rear. Sows do need better, more nutritious food while they’re gestating, but not all sows will become mothers.

3. More meat on a pig, compared to other farm animals

Compared to chickens or turkey, the meat on a pig is used pretty much 100%. Internal organs are used, the skin is part of the bacon and belly cuts, bones are sometimes left in and they can be simmered for broth, and so on.

But because pigs grow so large, their total meat, per animal, is more than what you would get from other farm animals. The only one that comes close to this kind of no-waste policy is beef. But cows are fairly expensive to rear, which is why the government has subsidized this industry.

So in short, pigs produce a lot of piglets, a lot of meat per pig, and are easy and cheap to rear and feed. They can be kept together in large herds and overall are a good option. 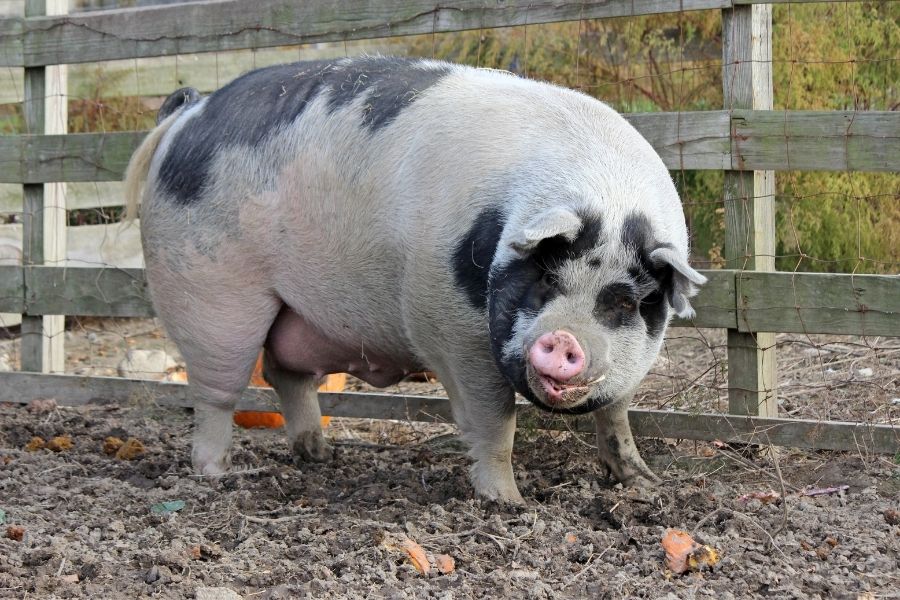 Read also: Why Are Sardines So Cheap ?

Why does pork smell so bad ?

Sometimes pork meat can smell bad, and unless the meat is rotting, it’s actually just boar taint. Boar taint is present in male pigs that have not been castrated, and once they reach puberty they develop a certain smell. You’ll know it’s boar taint if it smells a bit like a barnyard, fecal matter, and simply not something you’d want to eat.

There’s no sign the meat is tainted until you cook it, because the compounds (androsterone and skatole) only become apparent when subjected to heat (like cooking). If you’re wondering what those compounds do, androsterone is a hormone that aids in secreting sweat and urine, while skatole is produced in the large intestine, and is one of the key component of fecal matter smell.

Whenever you cook pork, you expect that delicious, rendered fat and caramelization smell. And most of the time it’s there, just waiting for you. But sometimes, the board taint is there and it, well, taints the whole meal. It’s not harmful, not is it toxic. It’s simply unpleasant, and the only sure way to rid the meat of it is to castrate the male pigs when they are very young.

Not all farms castrate their boars, for various reasons. So your best chance is to opt for meat coming from a female pig, if you have such an option. But if you’re buying from a supermarket, there won’t be a label stating the animal was male or female. So you’re just left guessing most of the time.

What you can do to cut through the boar taint is to add zesty spices and herbs and flavorings. For example citrus rinds, rosemary, fresh basil, and even a bit of red wine, they all work well to mask that board taint. They won’t completely cover it up but it might be easier on the nose and on your taste buds as well.

And that’s pretty much it about pork and why it’s so cheap. As you can see these animals are easy to rear and really do their own thing, as long as they are well fed and have a bit of room to roam.