Sardines are a common, cheap, very flavorful fish that can turn a lot of dishes that much better. You can easily chop up a few sardines and add them to a salad, or maybe your pets go wild for sardines. They’re easy to get a hold of and not all that expensive.

Actually, why are sardines so cheap ? After all, they’re seafood and as we all know seafood takes a lot out of your pocket. Well, it turns out not all seafood is created equal, and sardines show us just that. Let’s see. 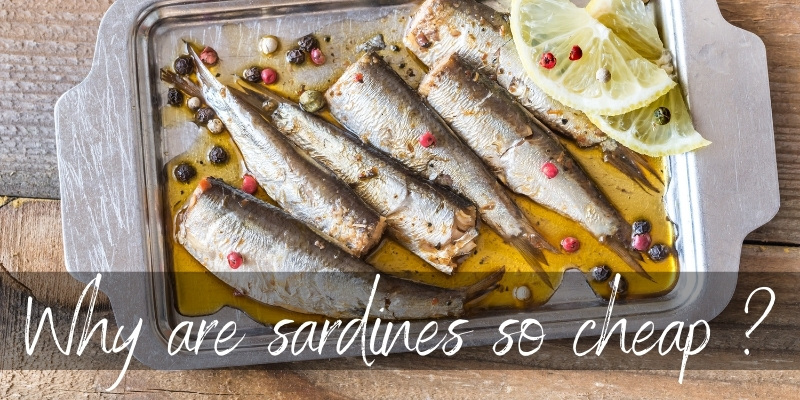 Why are sardines so cheap ?

Sardines are cheap because they are abundant in the wild, and the demand does not exceed the offer. Simply put there are plenty of sardines to go around, and they feed on readily available food – zooplankton.

Now let’s take a look at why sardines are such a great, inexpensive fish.

1. Sardines are plentiful in the wild

Sardines are easy to find in the water, as they stay relatively close to the surface. So they are easy to catch, and even easier to catch in larger amounts as they swim in schools.

The food source for sardines is plentiful as well. Sardines rely on zooplankton, which is a fancy name for tiny little creatures that live in the ocean like fish eggs, tiny crustaceans, larvae, and other ‘sea insects’ as some would call them. These little creatures are abundant in seawater, and sardines gobble them up like there’s no tomorrow.

So if the food is plentiful, there are plenty or other sardines to mate with, and the waters are clean, sardines will always be abundant. As it happens, sardines have been abundant for hundreds of years it seems. This means that unlike other fish types, they are not in danger of overfishing, and will not fetch a very high price.

2. There isn’t such a high demand for sardines

The fact of the matter is, there simply isn’t as much demand for sardine as there is for, say, salmon, or halibut, or mussels. This also helps keep the price of sardines low.

Oh, of course, sardines are not useless and you’ll find them used in many ways. Possibly the most common is fish oil, which is then used for various foods, medicine, and some objects. Sardine is a very oily, fatty fish so extracting fish oil is a breeze.

3. Most sardines are canned, and last for years

Since sardines are so easy to can, and the demand for freshly-caught sardines isn’t very high, most of them end up packed in olive oil or brine. This keeps them safe and edible for years on end, provided the can is kept away from direct sunlight and heat. 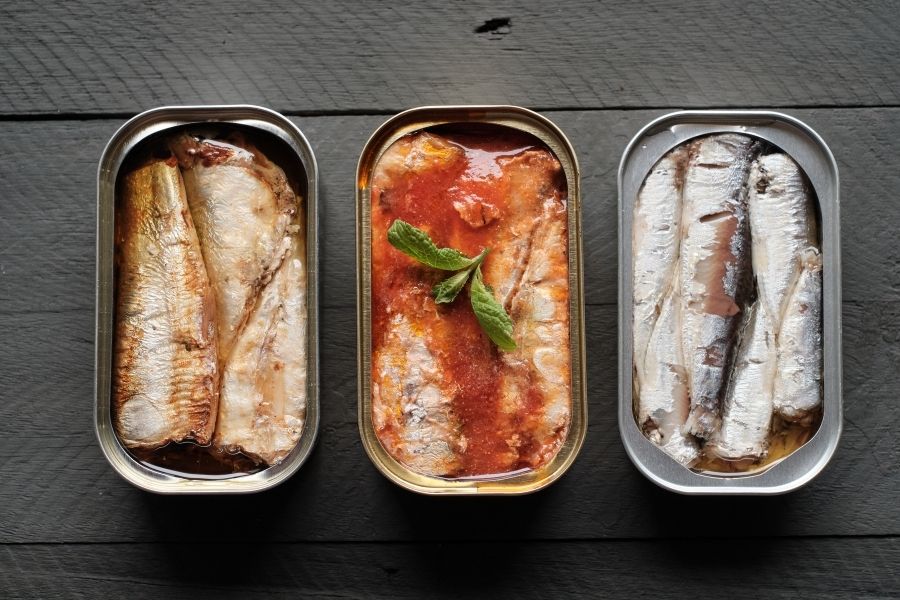 Really, a can of sardines can last you for 4 years if unopened ! Once opened you have maybe 3 days to go through it all.

So if most sardines for human consumption end up canned, and cans last for years on end, this also lowers the price of sardines. They’re easy to find, easy to store, store for long, and end up being inexpensive ! The fact that they provide a health bonus is just the icing on the cake.

Sardines are in everything !

We mentioned earlier that sardines are used mostly for fish oil. Well, you’ll notice that sardine fish oil is used in making some paints and varnish. But there’s more to sardines than just fish oil.

The leftover material, after the oil is pressed, is called fish meal. It’s simply the leftover fish, in this case sardines, that is then added to various animal feeds. Currently the main use of fish meal is for salmon feed, chicken feed, and livestock.

Can you eat sardines straight from the tin ?

Yes, you can eat sardine straight from the tin as they’re edible the way they are. If they’re packed in oil they can be a little gross, so you may want to lay them on a paper towel first and have some fresh lemon on hand.

But for sardines packed in brine you can easily eat them as-is. You can chop them up and add them in a salad, or eat them on the go if you’re out camping or in the wilderness. Or if you just have a hankering for canned sardines.

Should you rinse canned sardines ?

You don’t have to rinse canned sardines, but you can if you want to. You may lose some sodium for the ones packed in brine. The ones packed in oil can get a bit too much, but rinsing them isn’t a good idea. You’re better off draining the oil in a bowl, and then laying the sardines on a few folded paper towels, and then patting them dry with another paper towel.

Don’t throw the sardine oil down the drain, unless you dump some drain cleaner right after. Sardines have an amazing power to stink up everything. A better use for the sardine oil – usually light olive oil – is to cook the sardines or add to a salad, if you want a light, fishy flavor.

Do canned sardines have bones ?

Yes, canned sardines have bones but they are so soft and thin they’re easily crunched by your teeth. When they do get to the stomach they are easily digested, so you shouldn’t worry about sardine bones too much. If your sardines are particularly small then you might not even notice the bones.

Some sardines come with the heads, tails, and fins cut off, and some still have them on. If your still have everything attached, they could be much harder to eat. We recommend trimming those off, just to make your life easier.

Most sardines are eviscerated before being canned, but each company does things a little differently. So make sure you look at the sardines before eating them. if they haven’t been opened and cleaned out, then you may want to remove the intestines yourself.

Read Also: What Is Surimi Made Of ?

Can cats and dogs eat sardines ?

Yes, pets such as cats and dogs can eat sardines, as long as they are eviscerated, headless sardines. The pin bones will not be a problem, since the animals will digest them just like humans would.

If you want to make sure your pet is safe, get the smallest sardines possible. Those are usually too small to have their heads removed, so you may want to do that yourself.

Sardines add a nice boost of health to your pet’s meal, as well as the essential omega 3, 6, and 9 derived from the fish oil. Don’t fed them too often though, since they can get used to the flavor and won’t be too interested after a while. Keep the sardines as a weekly treat, rather than a daily meal.

You could break up the sardine into smaller pieces, and mix it into their regular wet food. Or mix it into their kibble bowl, this way each kibble will smell and even taste a bit like sardine. Just make sure you have the nose for it.

See ? Sardines are so cheap and they’re good for pretty much everything !