Looking at the spice shelves in supermarkets, you can’t help but notice one that stands out as very pricy. No, not the whole vanilla bean. Not the whole nutmeg either. The saffron. Why is is so darn expensive ? It’s part of a flower, what’s so special about it ?

You don’t use saffron every day, but you may want to know exactly why you pay $2.5 for 0.17 grams. Yes you read that right. We recently made paella and the saffron was easily the most expensive item on the ingredient list. And no, you can’t get true paella without saffron.

So we made it our mission to find out why saffron is so expensive, go through each point on the list, and try to understand what’s happening.  So let’s get to it. 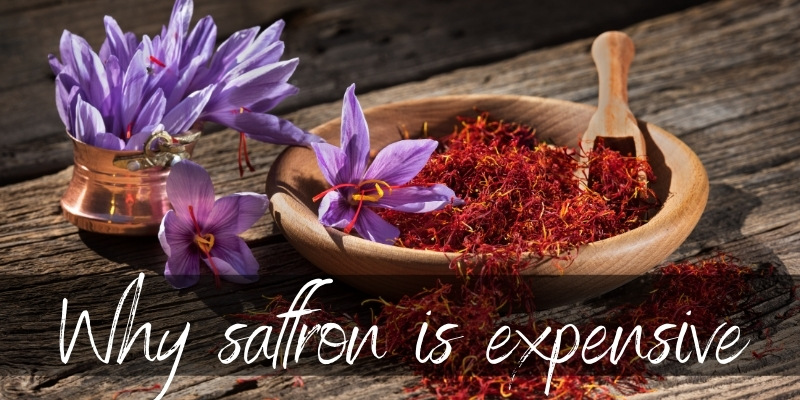 Table Of Content show
1 Why is saffron so expensive ?
1.1 Saffron is a very delicate flower
1.2 The time of day, weather, and season matter
1.3 You need thousands of flowers for a pound of saffron
1.4 Labor-intensive, difficult work
2 Is saffron worth more than gold ?
3 Where does saffron come from ?
4 How long does saffron last ?
5 What does saffron taste like ?
6 Ways to mimic saffron color
7 Watch out for saffron imposters !

Why is saffron so expensive ?

Saffron is expensive because you need 150.000-200.000 stigmas for a single pound/400 gr of saffron. Each flower produces 3 stigmas, and has to be handpicked.

Aside from all this, saffron is not a fast crop, it reproduces slowly and has a very specific timeframe for harvesting. Early mornings in fall are when saffron blooms and is picked.

This all results in a very time-consuming crop that needs a lot of fussing over when harvest time rolls by. The flowers are in bloom only a couple of weeks, and have to be picked the moment they bloom. Saffron is very delicate and wilts the same day it blooms.

Of course, the final price of saffron is blown up. Labor and crop aside, it’s a very sought-after spice, and this drives the price higher that it could be reasonably accounted for.

Much like with gold, the fact that people want saffron makes the price go up, as middlemen compete with each other and then sell the saffron to be packaged even more expensive.

Alright, now let’s get all those reasons on a list, and explain each of them.

Read Also:Why Is Paella So Expensive?

Saffron is a very delicate flower

Saffron flowers are a very delicate thing. Its family – the Crocus – is native to the Mediterranean basin and Arabian Peninsula. All of the Crocus flowers are all delicate, but saffron is by far the most delicate. 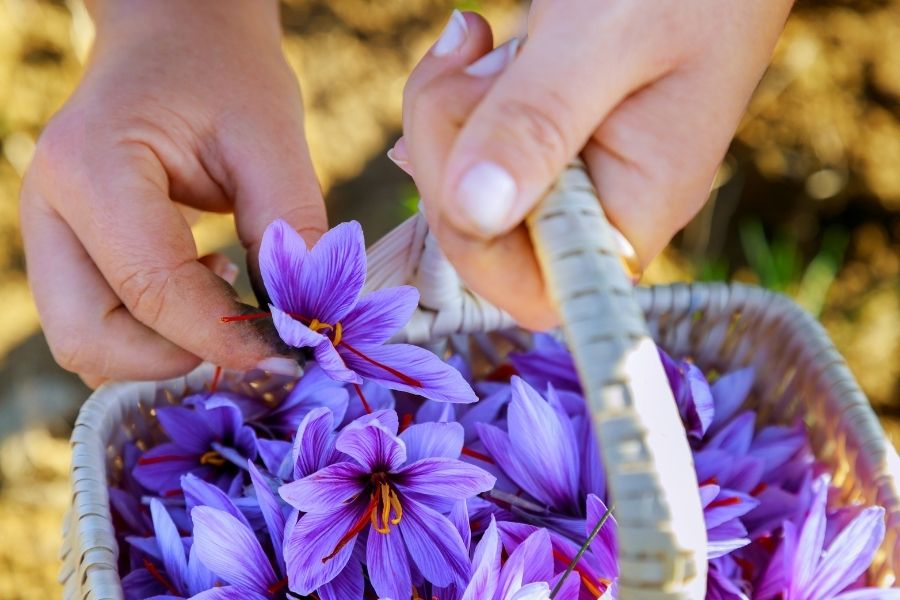 Because of this saffron needs to be handled with lots of care, and shielded from too much sun, too much water, too much cold, and so on. The crop can easily wilt if it’s not well taken care of.

The good part is it’s a perennial plant, meaning it will spawn from the same bulb for years to come. Much like bananas, saffron is a clone of itself. There is no saffron in the wild, only related flowers.

The saffron we know and use is cloned by splitting the mother bulb in half and allowing it to grow into a new plant.

The time of day, weather, and season matter

When saffron is picked, things need to be just right. Moisture, cold, direct sunlight all need to be in balance. They’re picked in the early morning, when the sun isn’t hard and it’s still a little cold.

These flowers bloom only in the span of a couple of weeks, in the fall. And they don’t stay blooming and shining and upright for several weeks, no.

Some flowers bloom today, some tomorrow, some next week, some the week after that, and so on. Someone needs to keep an eye on them at all times.

In short it’s a very specific crop when it comes to harvesting and lots of care is needed.

You need thousands of flowers for a pound of saffron

Since saffron only has three stigmas, which are the saffron threads you get in those small plastic boxes. Obviously, in the box you have more than three, which means lots of flowers were picked.

In fact, a pound of saffron threads is made up of about 70.000 flowers, or approx. 200.000 stigmas. These final weighing is done with dried stigmas, which means the fresh ones first have to be dehydrated and then weighed. 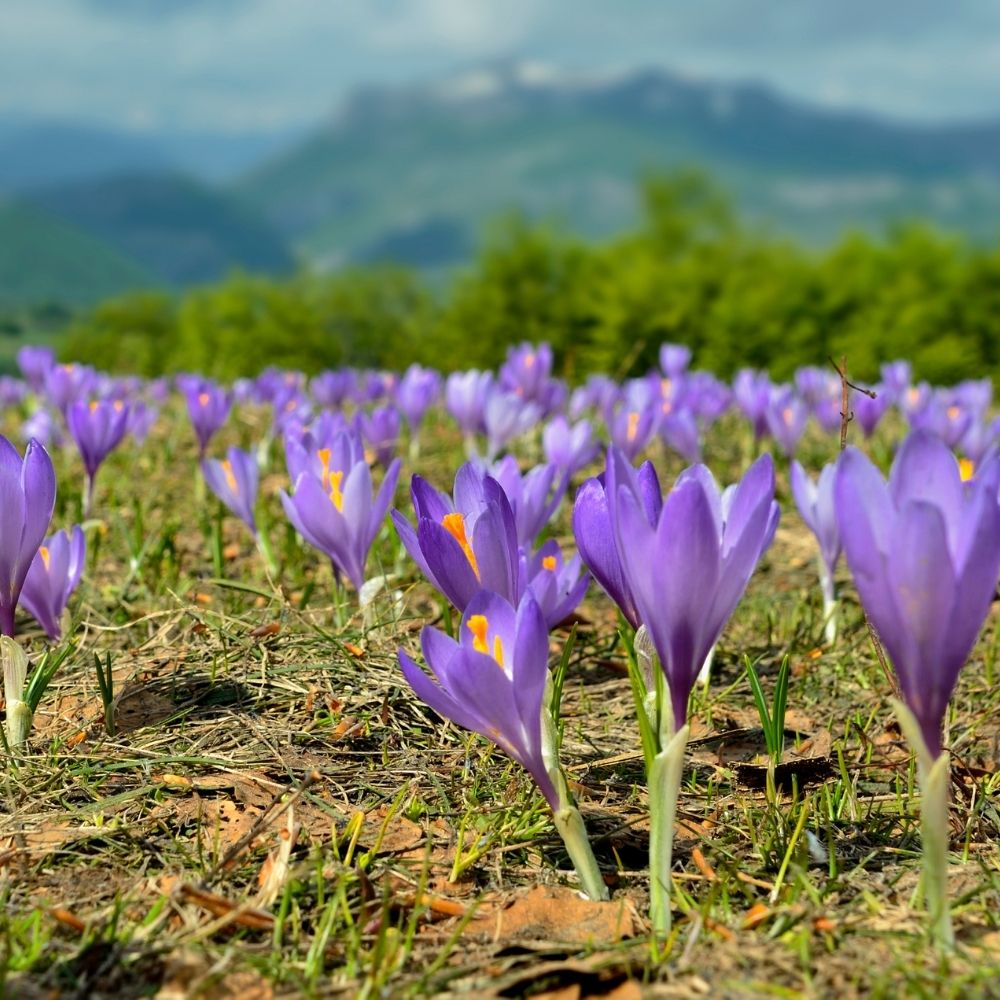 Labor is probably the biggest reason saffron has such a high price point. And for good reason too, because saffron pickers have a grueling schedule and the work is back-breaking.

Saffron flowers are pretty low on the ground, and there’s a point where you can’t keep bending down, and have to stay in that position. They’re bent over most of their work hours, much like strawberry pickers. This hurts their spines and is very difficult work. If you’ve ever picked anything in a field you know what we’re talking about.

There’s also the fact that when the workers enter the fields, they have to be quick to pick all the flowers, careful not to hurt the flowers themselves, and also not step on them. That’s a lot of responsibility.

And finally, when you think of how saffron blooms and wilts in the same day, you realize you have only a couple of hours to pick the entire field. This means dozens of workers in each field, all having to be very quick, precise, and careful not to hurt the flowers.

Most saffron comes from Iran (as in 90% of global production), and manual labor there is very cheap. Unfortunately the workers are pretty much exploited and a large profit is made off their work. The highest pay a saffron picker can get is $5, according to this interview for BusinessInsider.

Is saffron worth more than gold ?

Of course these prices may change but the ratio will largely be the same. Of all the spices and possible flavoring our there, saffron is by far the most expensive, being dubbed as ‘red gold’ in some places.

Where does saffron come from ?

The exact origin of the saffron flower is not clear, but the region is from the Mediterranean basin to the Arabian peninsula, and Central Asia. You can find saffron grown in Spain, Greece, Austria, Iran, India, Morocco, America, and Turkey.

In fact the entire Eurasian belt grows saffron, to some degree. If you’re unsure, the Eurasian belt is an imaginary band the width of the Mediterranean basin, spanning from Spain all the way to China.

Most saffron these days comes from Iran (about 90%). The traditional and long-standing saffron producers are Iran, Spain, Greece, and India.

Saffron has been in use for thousands of years. It was used in medicine, as a dye, as a trading commodity, as a spice, as a flavoring, everything ! Examples of ancient saffron-infused items are:

Nowadays saffron is mostly known for its culinary use, especially in savory foods. It’s still in use in medicine, as a dye, and in perfumes, though the topics aren’t covered by media as much as the culinary use.

How long does saffron last ?

Saffron threads can last up to 6 months in an airtight container. It needs to e kept in the dark, at a cool temperature, and the humidity must be very low.

When saffron is exposed to air for a long time it doesn’t rot or spoil, but it loses color and flavor.

Saffron doesn’t have that amazing on its own. It’s actually a fairly bitter, hay-like flavor but combined with the other ingredients in a dish it simply enriches it. There’s no real way to describe it.

Possibly because of saffron’s impact on our brains – it gets people a bit euphoric – we’ve kept adding it to our dishes since pretty much forever.

It terms of smell saffron doesn’t shine on its own. It’s a fairly herbal, hay-like smell, but again it enriches and deepens any perfume it’s added to.

You can’t cheat saffron very easily, because the color and flavor it gives is pretty unique. However you ca try using a few tricks.

Turmeric provides a yellow color to foods. It’s a bit flat, so you will need some red in there for an orange hue. Paprika will help turn it orange, but the flavor will not be saffron.

Still, if you only want the color of saffron, you can try those. Make sure the paprika is very well ground, otherwise you might find red specks in the food.

Watch out for saffron imposters !

Some folks try to make a profit off of fake saffron. If you’ve never seed true saffron you might be fooled by it. A true saffron thread will have a bulbous end, and a whitish tip on the other end.

Fake saffron can be made from lily stigmas, or marigold petals. Just dried and rolled to resemble dried saffron threads. In a plastic bow and through packaging it might be difficult to notice.

Other ways to trick saffron is to get saffron-infused somethings, like baking powder or flour or sugar. Most of the time it’s just some turmeric added, for the color.

Be careful when buying saffron ! Appreciate all the effort the laborers put into picking them, and remember that despite the price you only need a little at a time.