If you really like seafood, you most probably tried Paella as well. Seafood paella can be quite expensive, especially if you are not from a place with easy access to fresh seafood.

Paella is not only made with seafood; however, the seafood Paella is the most well-known one and probably the one that can make you curious why Paella is so expensive.

I’m from Romania and not from the seaside, so any seafood is expensive here, but there are some other reasons that I will explore in this article that can make Paella expensive. 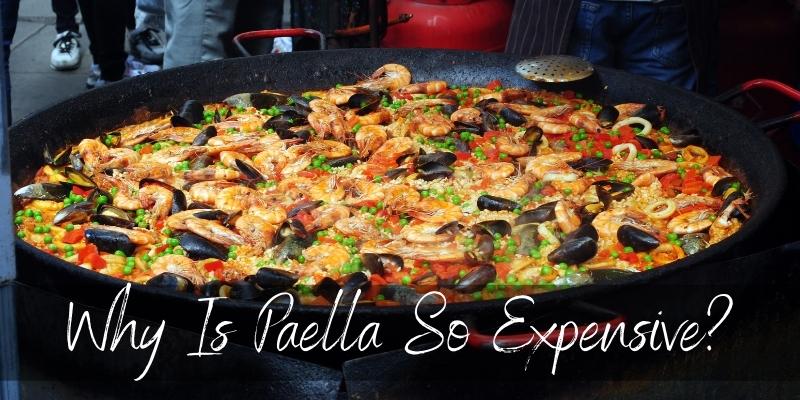 Table Of Content show
1 Why is Paella so expensive?
2 Paella origins
3 How to make a cheaper Seafood Paella
4 Conclusion

Why is Paella so expensive?

A good seafood Paella is expensive because many of the ingredients and seafood you need to make it are usually expensive.

The seafood cost depends on the Country/Region you are from, so it can vary from place to place.

But if you expect to get a seafood paella with Scallops, Saffron, and a good Chorizo, it doesn’t matter where you are from, those ingredients will always be expensive.

Also, one of the price factors is how easy it is to make a specific food. Paella is not the easiest food to make since you have to get a lot of different types of food to the perfect taste and texture. Usually, seafood has very specific timeframes and cooking temperatures you need to follow. So it is quite a challenge to get all of them right and also get the rice to the perfect texture.

That being said, if you visit Spain, you can find many varieties of Paella, from Veggie Paella to the seafood Paella that is well known across the board. Valencia is the birthplace of Paella, so it should be on your list if you like this dish.

Usually, the other types of Paella are not as expensive as the seafood one, which has Scallop, Saffron, and Chorizo, but I decided to talk a bit more about this one since it is the most common one.

Read Also: Does Paella Have Meat ?

Paella is a Spanish dish that has the city of Valencia as its home. The dish’s name came from the utensil in which it is made, a flat pan with two handles.

Paella has been made in many different ways since it is a very filling of food, it was used a lot by poor people.

They had to adapt a bit the recipe since they couldn’t afford saffron and used turmeric instead, which can be found in many Paellas this day, including some of the expensive Seafood Paellas, so check the ingredients carefully before ordering Paella. 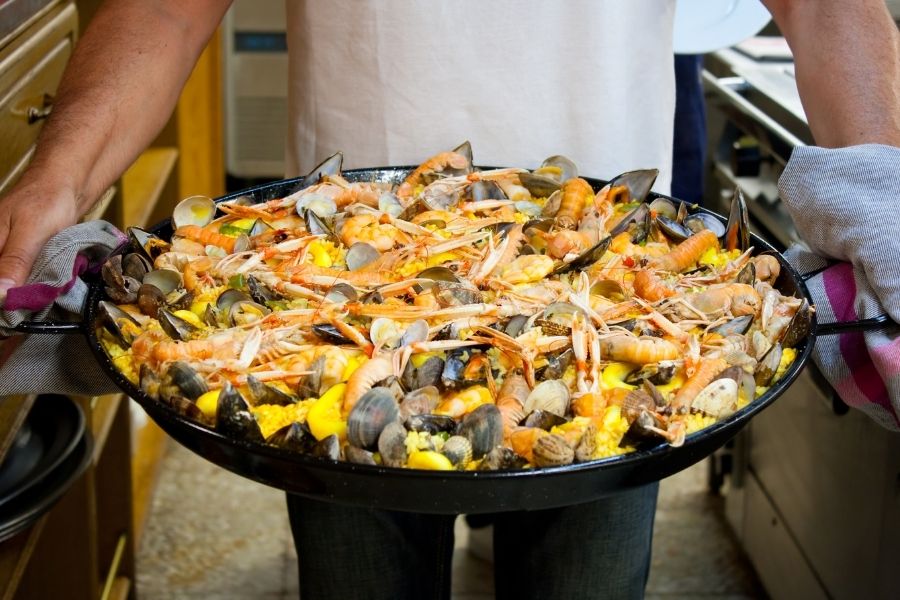 We don’t know exactly how the Seafood Paella got so popular worldwide, and the other types are almost non-existent, but if you visit Spain, you should find other types of Paella quite easily.

How to make a cheaper Seafood Paella

If you make yourself a Seafood Paella, there are certain ingredients you can substitute in order to make it much cheaper. It will help you to know them because they can often be substituted at restaurants, so you will know if the price is worth it.

-Substitute turmeric for saffron. This one is the most obvious since the saffron is very expensive. Saffron gives Paella the specific color and also gives a bit of taste, you can get almost the same color using turmeric and a bit of paprika, but the taste will differ slightly.

-Substitute chorizo with a smoked salami. This can work very well without affecting the quality all that much, but there are a lot of varieties of smoked salami, so you should choose one that has a similar taste and texture to chorizo.

-Frozen seafood instead of fresh seafood. This is situation-dependent since there are places where you will not be able to find frozen seafood, so using frozen seafood will be your only choice.

I thought I would put this one as well because, for example, in my city is someone who brings fresh seafood even if we are a bit far from the sea. Of course, it is very expensive and doesn’t last long, but it is an option.

Paella will usually be expensive if you are not in a place that has easy access to seafood. It can be expensive in such a place as well if they use ingredients like saffron, chorizo, and scallops, but if those are substituted, you should not pay a high price for your seafood Paella.

Check the ingredient list before ordering Paella or ask the waiter if they are not written on the menu.

I hope you will have a great Paella that will be worth the money. It can be a delicious dish that will make you want to try it more often.