Anise, licorice, and star anise have always been lumped together in ‘love it or hate it’ category. You can easily find any of these three spices in candies, especially black licorice added in gummies. Anise and star anise a common flavorings added to mulled wine, and may sometimes be found in some pumpkin pies.

But why are these three lumped together ? Does anise taste like licorice ? Are anise and star anise the same thing ? Can you substitute the three for one another ? Let’s take a look. 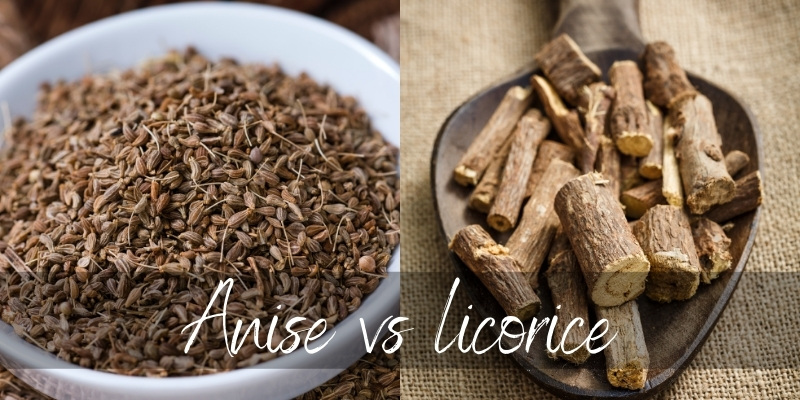 Table Of Content show
1 Anise vs licorice
1.1 What is anise ?
1.2 What is star anise, then ?
1.3 What is licorice ?
2 Can you substitute anise for licorice ?
3 What spices taste like licorice ?
4 How do you use licorice and anise ?

Anise and licorice are two different spices from different plants, yet taste very similar. Both contain anethole, the compound that gives them their trademark aroma.

However licorice also contains glycyrrhizin, which is a type of slow-releasing sugar that taste sweeter, for longer, and does not develop in the mouth as quickly as sucrose. Anise does not contain this sugar, and this is a key difference.

Where anise has a mild flavor, licorice has a stronger, mildly bitter taste (along with sweetness).

All this being said, anise and fennel are so similar in their aroma that today’s licorice candies contain a high amount of anise seed oil, so you’re tasting half anise, half licorice.

Anise is the spice made from the dried seeds of the Pimpinella anisum plant. It’s native to the Mediterranean region and Southwest Asia. It’s actually the trademark flavor in ouzo, a Greek hard liquor.

You can easily find anise in many stores, and just like other spices a little goes a long way. 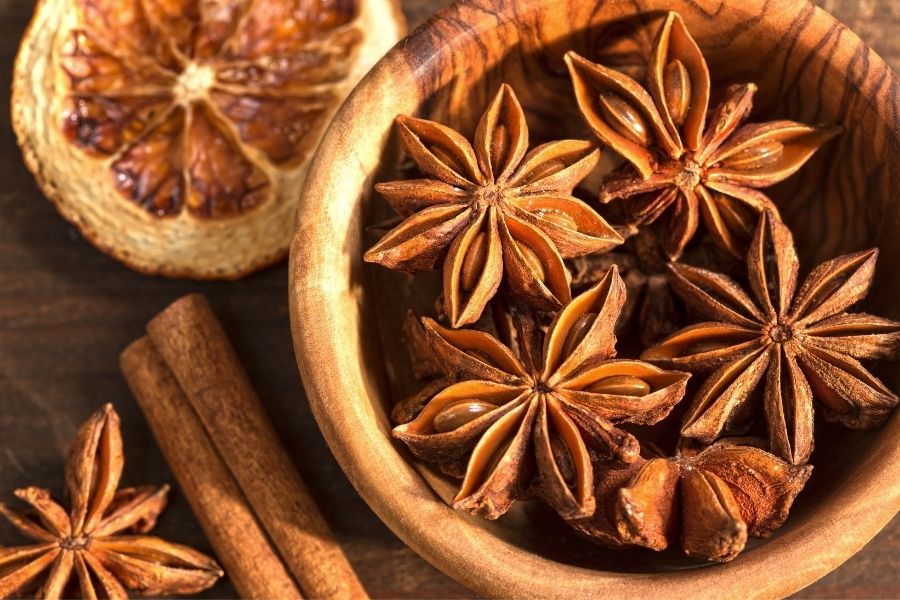 What is star anise, then ?

Despite the name, star anise is a completely different spice and plant from anise. Star anise comes from the Illicium verum evergreen tree, native to Vietnam and Southwest China. You can easily recognize it by its star shape, with 6 to 8 points. The seeds are inside the shell, and compared to anise are a darker, amber color.

Star anise is so common, that it’s commonly used interchangeably with anise. And yes, this means it doesn’t really matter which one you pick up, the taste will be the same.

Licorice is the root of the Glycyrrhiza glabra plant, native to Northern Africa, Southern Europe, and West Asia. The roots are dried and used as flavoring in many dishes and sweets, and have evolved to be the main flavoring in many licorice snacks. Actually the dried licorice sticks themselves were a sort of sweet snack, and the inspiration behind Twizzlers. 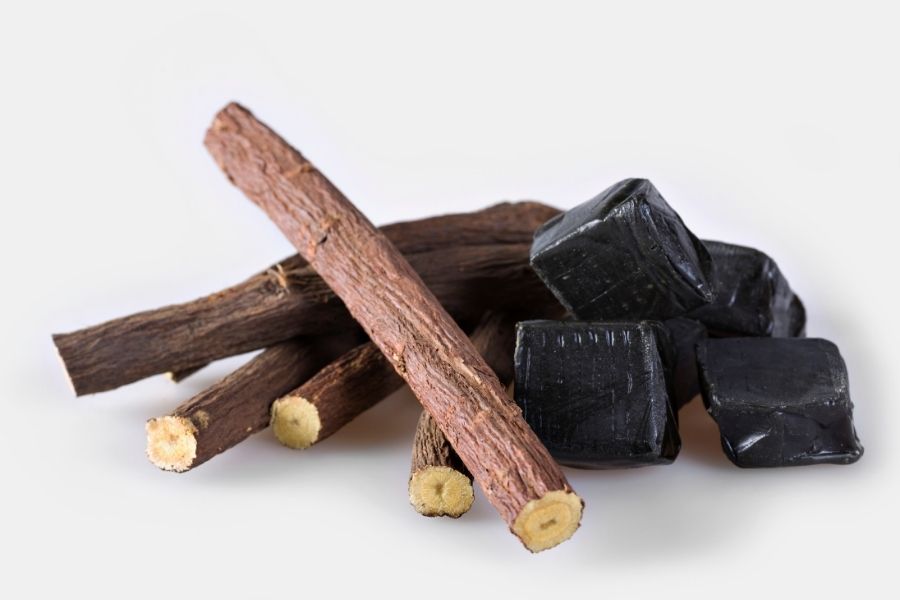 Can you substitute anise for licorice ?

Yes, you can substitute licorice for anise, and even star anise, and use any of the interchangeably. Their flavors are so similar they can easily be used in place of one another if you don’t have a particular spice on hand.

Depending on what you’re making, anise or star anise may be the better options, since licorice is a dried woody root, so it will not dissolve in water. All three work better if you grind them or simmer them in water (or what you’re cooking).

Keep in mind that licorice root is slightly bitter and has a slow-release sugar in it. Meaning it will sweeten your dessert or drink, but it will work a little differently than regular sugar.

Spices that taste similar to licorice are anise, star anise, and cumin seeds. Fennel alto tastes similarly to these spices, but is a root vegetable and thus is used differently than spices. Still, all of them can be used in a recipe, depending on what you’re cooking and how you intend to add that flavor.

Anise, star anise, and licorice are common in drinks and desserts. Cumin seeds are common in savory meals, while fennel is commonly used in savory dishes but as part of the main ingredients.

How do you use licorice and anise ?

Licorice and anise are fairly easy to use spices, the bigger question is whether you want to add them in dishes. They impart a vaguely sweet, bitter, and almost menthol-like flavor to whatever they’re used in. By menthol we mean the flavor, without the actual cold sensation menthol gives you.

Sone of the most common ways to use licorice or anise is in drinks. Either by making a drink centered on the resulting anethole, highly soluble in alcohol, or by simmering these spices in an alcohol like wine. Consider adding a few anise seeds (or star anise) to your glass of whiskey and letting it infuse a little. You can even add these spices to your tea and they will impart a strong flavor.

Another way to add these spices is to add them to baked goods, sweet or savory. A bit of anise goes very well with a strong red meat, and it may be found in some types of sausage. In some cases it is replaced by cumin, to do the same thing.

The only desserts that have anise or licorice in them – aside from gummy snacks – are occasion sweet pie or dumplings with a filling that is sweet but with a lot of body.

As for the best flavor combinations, you may use any red fruit (cherries, raspberries, cranberries, strawberries) in combination with a bit of licorice or anise, or even star anise. Cinnamon also works well with any of these two spices.

Vanilla is also a good option, as is coffee. Caramel may not work well in this, since it has a different flavor profile.

In short, you may use anise, star anise, licorice, and even cumin in any way you like and you can easily swap them for each other. Their flavor is very similar.