If you’re vegetarian but would like to try sushi, you’re probably confused whether it would align with your food preference. While sushi started out as a fish-based dish, it does not remain so.

There are so many sushi options to choose from, you may just find something for yourself. Some of them are completely vegan, and we’ll touch on those as well. 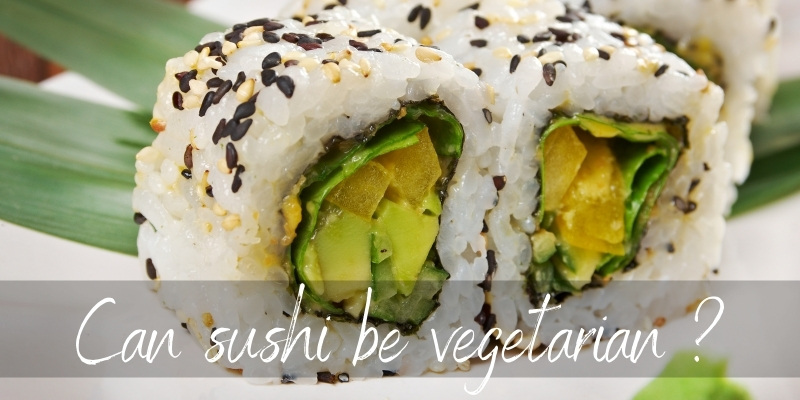 Can sushi be vegetarian ?

Yes, sushi can be vegetarian if prepared without meat or meat-based products. Despite sushi starting out as a fish-based rice dish, it has many iterations and quite a few of them are vegetarian, even vegan.

If you’re wondering about the fish in the sushi, it is not stored next to the rice so there is no cross-contamination.

Does fish count as meat ?

In our personal opinion yes, fish does count as meat. It comes from an animal which had to be slaughtered and the used for a meal.

That being said, you can always request your sushi to not have any fish or meat, and ask for a different topping instead. Actually let’s first talk about the vegan and vegetarian sushi types out there. There are a few that are traditional, and some are more recent, still, it’s good to know which they are.

Inarizushi is made with tofu skin, filled with sushi rice. It’s pinched closed, and then fried.

These are the classic cucumber rolls, with just rice and cucumber. They’re called kappa after an ancient Japanese water imp, that was green and loved cucumbers and hung around rivers. You may also find avocado rolls, on the same variation and idea.

In fact all veggie rolls (or maki) are the vegetarian or vegan. So aside from the cucumber rolls or avocado rolls, you may find daikon maki, pickle maki, bell pepper maki, arugula and carrot maki, red radish maki, and so on.

Some of them may use cream cheese or mayo as a sort of binder between all the veggies. Those will usually be uramaki (inside-out rolls). 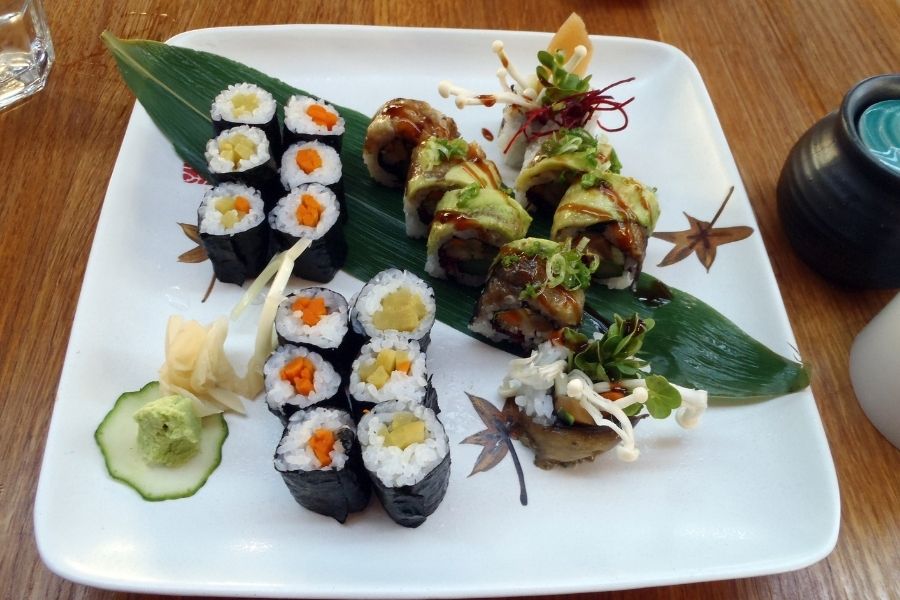 One clear example of a pre-determined vegan roll is the New Mexico. It’s named after the New Mexico green pepper (spicy), and it also contains teriyaki sauce and rice. Sometimes the pepper is tempura fried, in which case it’s no longer vegan but it is vegetarian. You may ask the waiter if the tempura batter they use is vegan, it’s certainly possible.

On the same vein, some places may offer named rolls in a vegan or vegetarian form.

Nigiri is the oval-shaped sushi with a thin layer of another ingredient over it, such as salmon or tuna. You may also find vegetable nigiri, such as cucumber or avocado or daikon nigiri, or even shiitake mushroom nigiri. Eggplants (grilled) may be used, as are thin strips of carrot.

You can also find nigiri topped with tofu, if you’re looking for something with more protein. Most of the time nigiri with veggies will have a thin band of nori, to to keep the ingredient strapped to the rice. It’s not a signal that the dish is vegan, so don’t count on it always being there.

Tamagoyaki is simply a Japanese omelette, but it’s a little different form what we usually think of. It’s that thiiiiin, square omelet that is often rolled to the side of the pan, like a burrito. It may or may not have some fillings. The omelette itself is vaguely sweet.

Some restaurants let you choose your toppings

Depending on where you’re eating, the restaurant may have an option to let you choose your own sushi fillings and toppings. This means they will be made for your specific ordcer, and generally you can choose whatever filling for whatever kind of sushi you like.

You can get all-veggie sushi, and in some cases you can even swap the nori for thin slices of cucumber or lettuce. Here’s w brief rundown of the most common vegetarian and vegan sushi fillings or toppings.

You can mix and match any of these to your heart’s content, and you’ll end up with just the right flavors. And who knows maybe another restaurant may provide you with a more extensive list of vegetables and protein to add to your sushi, these we only the most common we could find.

In short, yes, sushi can be vegetarian don’t worry. If you take a close look at the ingredients of some pre-made sushi they’re even vegan. And you can always ask the waiter if they can make something for you that’s not necessarily seaweed salad.