Whenever sushi comes into discussion people get divided: they’re either in love with it, or completely revulsed by raw fish. Conveniently forgetting the many sushi types that have cooked meat or the ones that are completely plant-based.

However these people do have a point, and that is that raw fish can be dangerous. It really matters where and how you source your sushi fish, especially if you[‘re going to use it raw. So naturally, you arm yourself with sushi knowledge and one of the best damned recipes out there, and it called for sushi grade tuna.

Now how is that different from canned tuna ? For some the difference could seem obvious, but for complete beginners this really needs explaining. So let’s talk tuna, sushi tuna, canned tuna, and when or how all of these intersect. 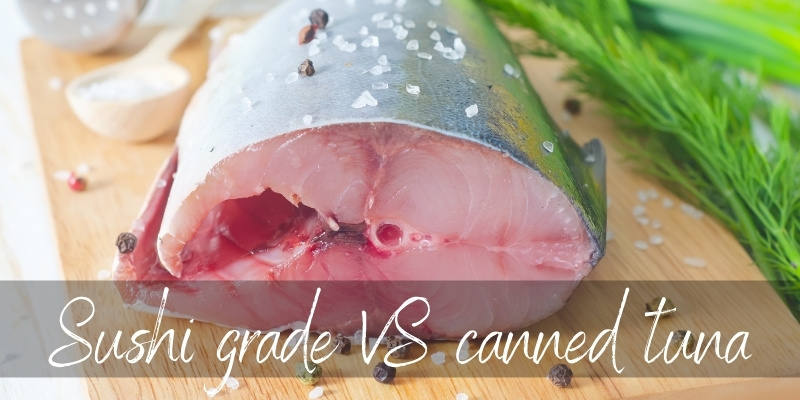 Table Of Content show
1 Sushi grade vs canned tuna
1.1 Canned tuna is rarely used in sushi
1.2 Sushi tuna is usually raw, cut into this slices
1.3 Sashimi tuna is always top notch tuna
2 What does sushi grade mean ?
2.1 Can I use supermarket tuna for sushi ?

Sushi grade tuna is supposed to be high-quality raw tuna meat, from clean, unpolluted waters. The fish is meant to be well exercised, and have no parasites, and have been fed a varied diet. Wild tuna meets said requirements, but with only a few ever getting parasites.

Meanwhile canned tuna is made up of the leftover tuna meat that does not make it into tuna steak. Whether it’s cut tuna or shredded tuna, this is cooked fish meat, that is them sealed in a can and sold ready to eat. It’s what you will find in a tuna salad or tuna sandwich. Delicious, but not what sushi uses (usually).

The first and foremost reason you’ll rarely see canned tuna in sushi is because this is a dish that prides itself on showcasing the freshness and flavor of fish. So using canned tuna would defeat the purpose. 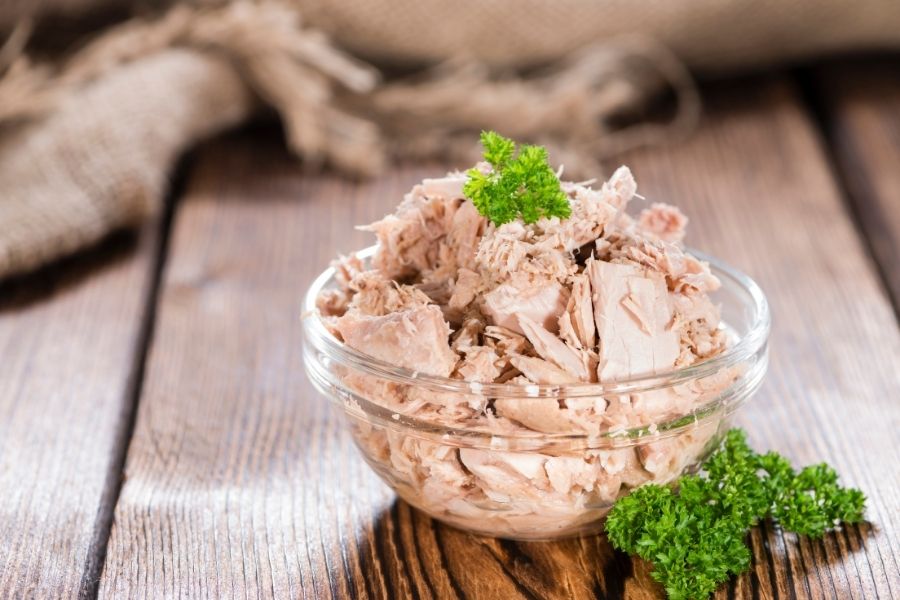 However there is tuna sushi that uses the canned version. Those are almost always going to be the uramaki (inside-out rolls), accompanied by cucumber as a filling. You may also find a dab of spicy mayo on top or throughout the tuna filling.

This kind of tuna is rarely used in sushi, and it’s not really that bad. We mean if you like tuna sandwich you’ll probably love this kind of sushi too. Just don’t expect it to be a very common sight.

Sushi tuna is usually raw, cut into this slices

True sushi tuna is meant o be used raw, in very thin slices. You’ll find it in any sushi combination, from the regular maki to uramaki and nigiri and temaki. Tuna is usually more expensive than salmon, and both are traditional sushi toppings.

The way tuna is used in sushi is meant to showcase its flavors. If you’ve never noticed tuna, it’s a little sweet and meaty. On a nigiri – just rice and a dab of wasabi, tuna really shines and you can taste all of it.

But because tuna is really not that cheap you’ll find it in just a few sushi types, especially if you’re going to a place that is trying to keep their prices low.

There’s a difference between sashimi tuna and sushi tuna, though it’s not all that dramatic. The main thing is that sashimi is raw meat, cut a little thicker than sushi tuna. This means you need to taste it in all its glory, so you need to use some damn good tuna.

Now sashimi isn’t for everyone. It can be off-putting, especially if you’re already on the fence about sushi with rice. So sashimi is meant to be enjoyed as more of a delicacy than an actual meal you fill up on. That’s sushi’s job, not sashimi.

The thing about sashimi is that it’s meant to provide an experience, so it will look beautiful, have delicate notes, and the sushi chef serving will usually put on a nice show. And in case you’re wondering, it really does matter how the fish is cut and now thick the slices are. each meat is different and the chef knows this.

Good sashimi is great, and it’s mostly thanks to the chef.

What does sushi grade mean ?

Alright, let’s clear up sushi grade. You may be thinking that raw meat is just raw meat, how is there any difference between them ? Well you’re right in a way, fresh meat is fresh meat and you can’t really improve upon it. But you can definitely reduce the quality, or slaughter a poorly fed and kept animal, resulting in poor quality meat.

Here’s the thing. When it comes to seafood almost all of it is deep frozen, and then sold like that, or thawed and then sold. There’s two big reasons for this:

A downside to freezing meat is that the cell walls are broken when the moisture freezes. This meant the meat will lose flavor and texture, so it’s maybe not the best thing. If all you’ve ever had was supermarket fish, then you will probably never notice the difference. But once you go to a place that uses fresh-caught fish you’ll notice taste and texture are night and day.

So, sushi grade. It’s supposed to be fish that’s never been frozen, meaning it’s rushed to the restaurant as soon as they have enough fish for a transport. The fish is kept on ice, but it can only last so long.

This means extra transport fees, but amazingly fresh fish. It also means that the fish you’re eating is meant to not have any parasites, since the fishermen know these fish won’t be frozen so they need to be very good quality.

As for what actually happens in a restaurant… kitchens are notorious. If you’re at a restaurant that does not specialize in seafood or sushi, or does not have a certain day of the week dedicated for seafood, it’s probably supermarket fish. Fishmongers sell fish in batches, and it’s much easier to rush a big batch of fresh fish to a single restaurant than a fish here and a fish there.

Read Also: Why Is Tuna Red ?

Can I use supermarket tuna for sushi ?

We really recommend not using supermarket tuna for sushi, not if you’re going to use it raw. There’s two reasons for that. First, it’s been frozen so the texture and flavor will be sub-par when raw, and you’ll be disappointed. 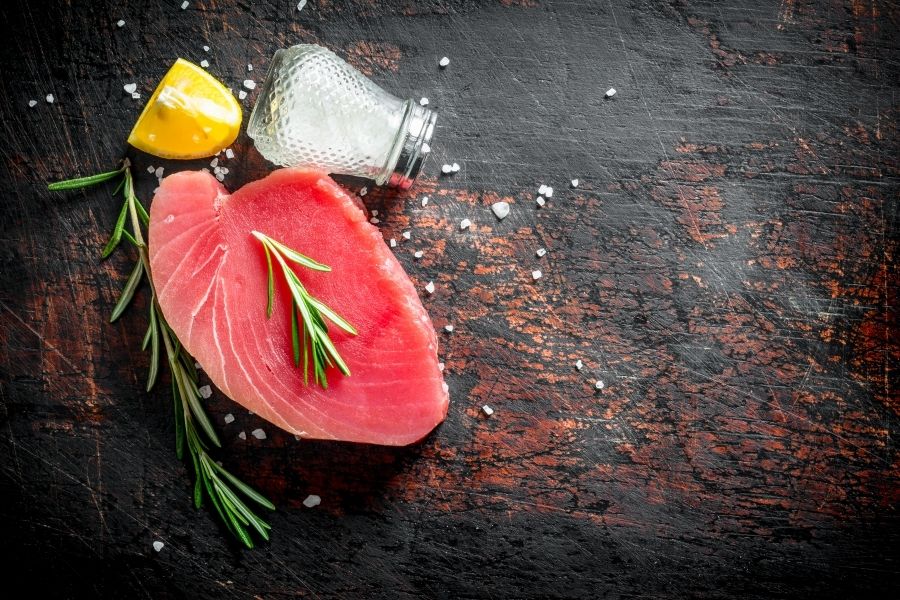 Second, you’ll have to cut it yourself in a very thin strip to use, and most folks don’t have a sharp enough knife or that much dexterity.

If you’re going to use supermarket tuna, go ahead and lightly sear a tuna steak and then cut that into thin strips and use in sushi. The flavor will be better. Just don’t eat it raw, it’s really not that kind of fish meat.

As for what kind of tuna to use for sushi, it doesn’t really matter. As long as it’s fresh, good tuna the taste will be good. If you’ve got any other food curiosities be sure to check the related articles below, we’re always adding more food facts to make your life that much easier.