As sushi lovers ourselves, this is what we’ll be tackling today. We’re aware that finding ‘sushi rice’ on a supermarket may make you wonder why it’s a different rice and label than regular white rice, though it looks pretty much the same. So let’s take a look. 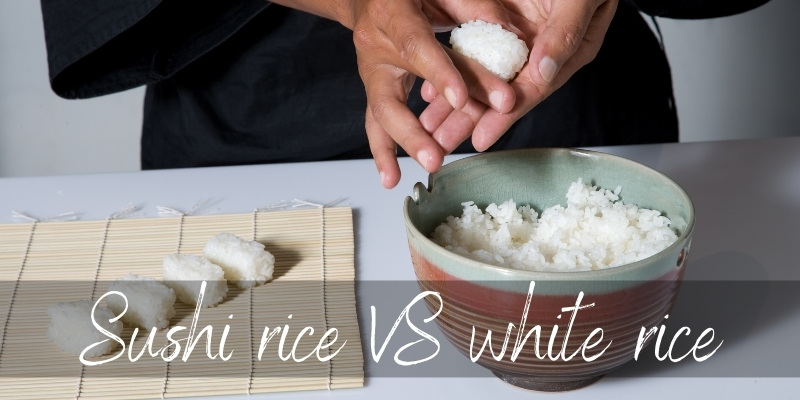 Table Of Content show
1 Sushi rice vs white rice
2 Is sushi rice healthier than regular white rice?
2.1 Sushi rice is Japanese rice, stickier than normal
2.2 Steaming rice gives it a wholly different texture
3 What about glutinous or sweet rice ?
4 Can white rice be used for sushi ?
5 Can you use sushi rice as normal rice ?
5.1 What happens if you don’t wash sushi rice ?

Sushi rice is actually Japanese short grain rice, which is more translucent and stickier than regular white rice. It’s different in texture, because it’s steamed and this means the individual rice grains will be fluffy while still sticking together.

Compared to the way regular white rice is prepared, sushi rice ends up with a perfect mix of separate and sticky. Home cooks in Japan use sushi rice for pretty much everything, because it’s actually the basic Japanese rice everyone uses.

It’s not worth it to try making sushi with other types of rice if you have access to sushi rice.

The difference is mostly in the way the rice is cooked, but the grain matters as well. Compared to regular white rice, Japanese rice is a little stickier. It still needs to be washed to remove the outer coating of starch. It’s what the Japanese use for all their rice-based foods, and it has a great texture.

That great texture comes from not stirring the rice, and also not giving it as much water as you’d normally cook rice with. Steaming rice involved a controlled amount of water, and it’s almost a 1:1 rice to water ratio. The rice is cooked only in the heat and steam, using a rice cooker or a bamboo steamer.

This is where the texture matters. Steaming keeps individual grains separate, since there is no stirring involved. No rice brushes against another rice grain, everything is static. This means there is no extra starch released, which does not form a thin sticky sauce between all the grains. Instead each grain becomes lightly sticky through coating.

It’s kind of like the difference between steaming porridge and boiling it and stirring it, forming that sticky paste.

If you were to steam regular white rice, it wouldn’t be as sticky as Japanese rice. This would be a real pain because a lot of Japanese dishes are built on the sticky rice method.

What about glutinous or sweet rice ?

You may be wondering if you could use sweet or glutinous rice. Don’t worry, it doesn’t have any gluten, despite the name. No rice on the planet has gluten, though it does have starch. The glutinous name comes from the Latin glue-like or sticky, glutinosus.

So about using sweet rice. No, it would end up much too sticky, even if washed very thoroughly and then just steamed. It’s just the way this rice is made.

You will find sweet or glutinous rice used in some Indian, Bangladeshi and Burmese dishes.

Can white rice be used for sushi ?

If you cannot find sushi rice at all then you can use white rice, though you will get a slightly different effect. As European white rice is not as sticky, the sushi may not hold together very well. Oh it can get a little sticky, but maybe not to the degree you’d need it.

You can get past this by boiling the rice instead of steaming it, this way you release more starch. The downside is that the texture of the rice will be different. Sushi relies on the rice being cooked just a little past al dente, and if you boil rice you end up with a softer grain.

But in short, yes, you an use white rice instead of sushi rice. It won’t end up exactly the same in terms of structure, but the sushi roll should hold we enough. You may want to stick to maki rolls, the ones with the nori on the outside. Just to make sure everything stays in place.

Can you use sushi rice as normal rice ?

Yes, you can use sushi rice in place of normal rice, just make sure to thoroughly wash it in cold water. You may want to steam is, otherwise it can get stickier than regular rice.

If you’re making something like risotto or pilaf, then it’s going to be fine because the end result is kind of sticky anyway. There won’t be any real difference when it comes to flavor.

Read Also: What Rice Is Used For Fried Rice ?

What happens if you don’t wash sushi rice ?

Because sushi rice has more starch than regular rice, the extra starch on the outside will result in a very clumpy, sticky rice that would resemble porridge. Unless you’re making congee, that kind of texture isn’t ideal in a rice dish. 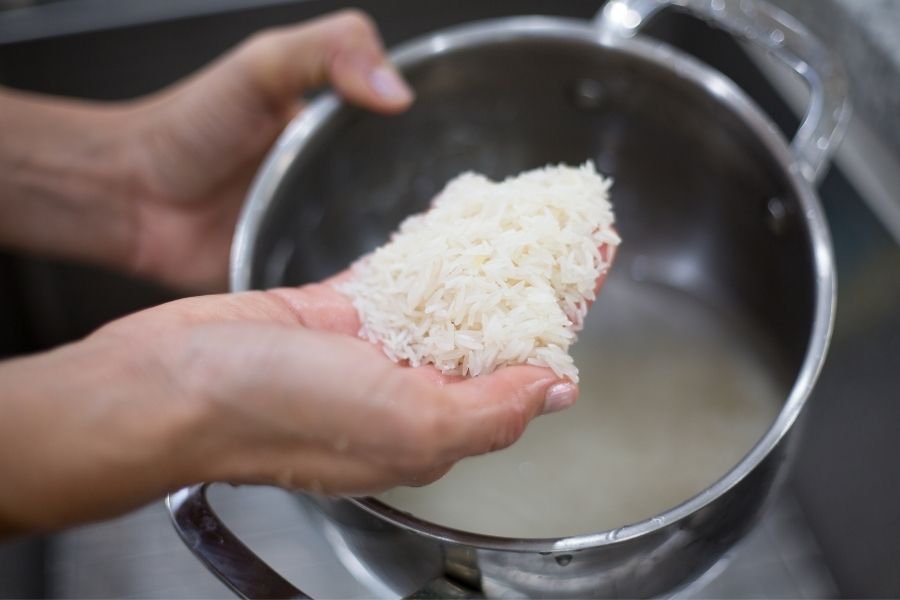 It also matters just how you’re cooking the rice. Steamed sushi rice that was not pre-washed will be extra sticky, but the individual grains should still be visible. It won’t be a messy lump of rice grains.

But if you boil sushi rice without washing it first, and you even start stirring it, then you’re going to have the stickiest rice you’ve ever seen. Worse, it will be so sticky you can’t really season it for sushi.

You may be wondering if you really need rice vinegar. Well, yes, there’s no real substitute for rice vinegar because it’s the mildest vinegar out there. ACV is way too fruity, so you only other option is the mildest white wine vinegar you can find.