If you’re in the middle of winter then you may not have easy access to zucchini/courgette. So what can you use in place of courgettes ?

To be honest there’s not that many direct substitutes. Most of these will be completely different veggies, and which you use will depending on exactly what you’re making, and why your recipe calls for zucchini in the first place.

And in case you’re wondering, courgette and zucchini are the exact same vegetable. Courgette is the European name, while zucchini is the American name. That’s the only difference.

So let’s take a look at some of the best courgette/zucchini substitute. 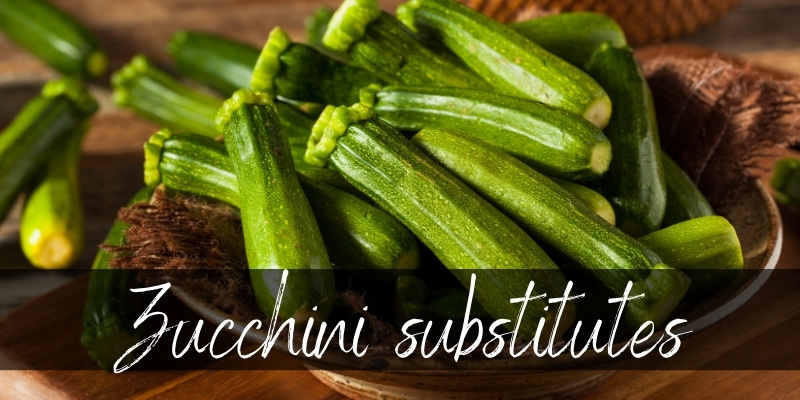 Depending on your recipe, one of the above substitutes may work better than the others. For example if you’ve got a recipe that needs zucchini for a bit of crunch, lightly cooked, then any of these will work. Or if you’re making zucchini bread, then something equally moist will work better than a denser, drier vegetable.

So let’s first take a look at the ones most like zucchini, and then at the other substitutes.

Spaghetti squash gets it name from its interesting texture when cooked. It’s just as soft as zucchini, but it comes away in thin strips, much like spaghetti.

So if you’re looking to make veggie noodles, then spaghetti squash is a good substitute. It also works in place of shredded zucchini, in any recipe you may need it. It goes great on a grill too, but will mush up quickly if baked.

Pattypan squash are small, very pretty squashes but they’re not easy to find for sale. They look like a full bowl, with scalloped edges. They cook and taste like like regular zucchini, so feel free to use them in any way you want. 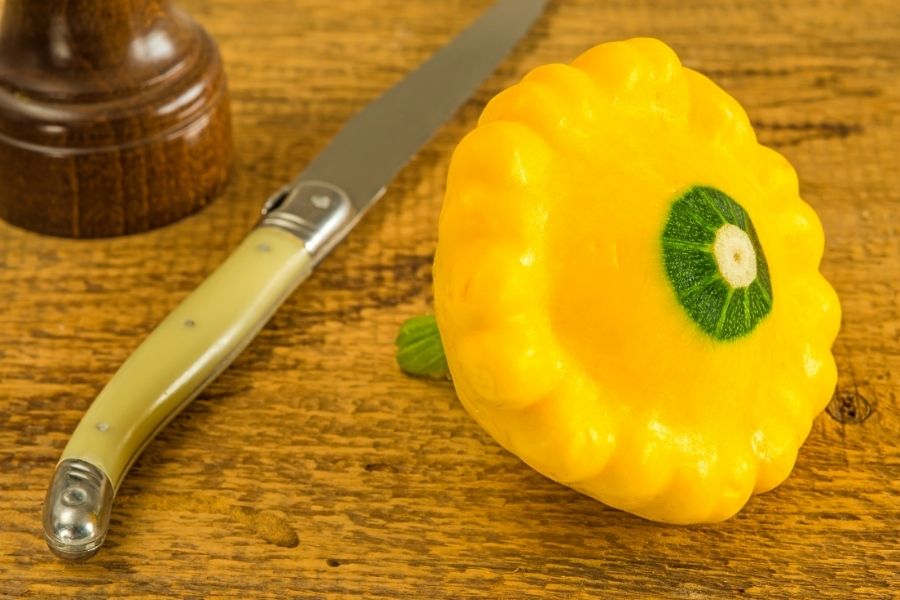 We know it has zucchini in the name, but some folks may call it differently. This means you might have a chance of finding it, even if you can’t find zucchini. It’s also called summer squash, sun squash, summer pumpkin, yellow squash, really it has a lot of names. It’s essentially the same thing as a green zucchini, except its skin is golden-orange. And yes, it cooks the same way.

If none of the above are available, you can always try cucumbers. After all, they’re very similar except they have more water. We recommend big, English cucumbers for this swap.

Cucumbers will work better if you substitute them in salads or warm entrees, or if you only chop them very roughly and barely cook them at all. Keep in mind they have a different flavor than zucchini, so season them accordingly.

Now let’s get to the other substitute types. In some cases you may find yourself forced to go for a completely different vegetable. The first we’ll start with is carrots.

These are denser and need more cooking time than courgettes but they bulk up a salad or dish very nicely. And if you’re very patient, you can even cut the carrots into matchsticks so get a similar texture to zucchinis.

Keep in mind that carrots are sweet, and this will flavor the entire meal. They’re also much drier than zucchinis, so if you need some moisture add some stock or water to the recipe.

Bell peppers are a nice addition to any recipe, whether it’s for bulking a meal, baking, or grilling. They will add a bit of an earthy flavor, but in a nice way. And since they’ve got a fair amount of water, they won’t dry out curing cooking.

You may think eggplant was the most obvious choice for a substitute. We’d like to disagree, since we think eggplants and zucchinis behave very differently in a recipe, so you can’t use them the same way. They complement each other very well, but are not a perfect substitute. 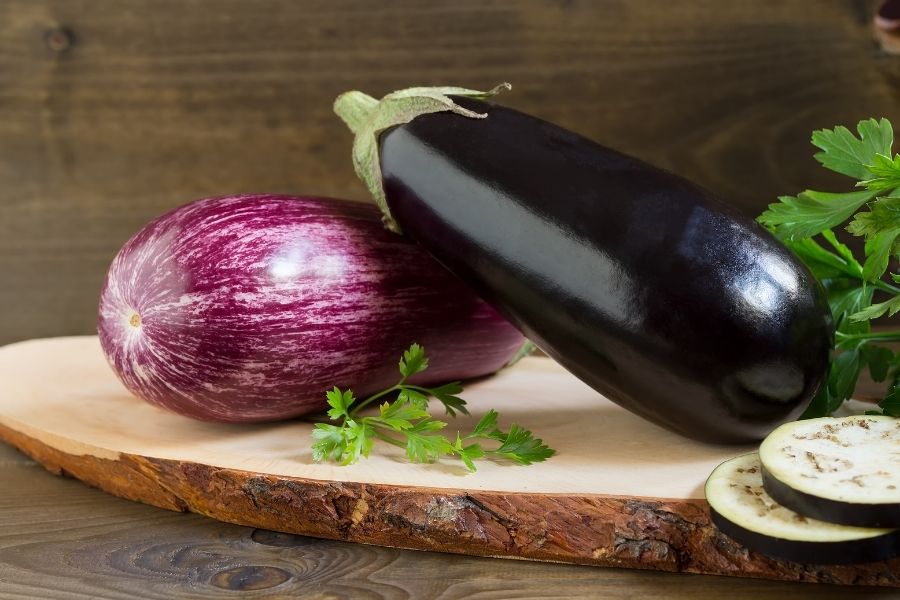 Keep in mind when cooking with aubergines that they take up all the oil or fats that you put in a recipe, they’re like a sponge. They will also need to be salted like zucchini, to draw out moisture from them (if you need to).

And they will soften very quickly during baking or frying, so only add them towards the end. Otherwise they get too mushy. We know some folks are alright with eating them raw, but the texture is very spongy so we recommend cooking them.

Yet another great option, and it brings a lot of flavor too. Of course, mushrooms and courgettes are worlds apart but they’re still a good substitute. They bake, fry, and grill very well.

They have a lot of moisture, so they will shrink during cooking. Other than that, they can be used in almost the same way as zucchinis.

Do keep in mind that you can combine all of these substitutes, or use more than one if you need to bulk a curry, ratatouille, grilled veggie dish, anything. And if you really need the zucchini flavor, try the first 4 substitutes.

Is frozen courgette/zucchini as good as fresh ?

If you have a batch of frozen zucchini or just bought a bag, then you can sue those too. It’s just that they will be incredibly mushy, so it will work better for some recipes.

For example a cream soup, smoothie, or zucchini bread will take very mushy zucchini. But if you want even the slightest bit of texture, like in a salad, soup, or grilled, then thawed courgettes aren’t that great.

The problem is with the amount of water they’ve got. You see, all things are made of cells, and those cells have walls. When the moisture inside the cells freezes, it expands a little, and the cell walls break. This is what leads to mushy fruit and vegetables when you take them out of the freezer.

In short, it’s up to your preference in texture, and/or what you’re cooking if you want to use frozen zucchini.

Read also: Why Is Zucchini Bitter ?

How to mask the flavor

If you know you’ve got very picky household members, or you really can’t stand the flavor of the above substitutes, you can try seasoning them with something extra.

Our first recommendation is a bit of crushed garlic. Don’t overdo it, otherwise everything will taste of garlic, unless you want that. Fried or caramelized onions are also an idea, depending on what you’re cooking.

Herbs like fresh basil, rosemary, or mint will also work great. Maybe a curry powder, to spice things up ? Try adding arugula too, since that comes with its own flavor, which we think goes great with any salad.