Out of almond milk and desperately need some for a recipe ? No worries, we’ve got you covered. We’ll tell you all about almond milk substitutes, and guide you on which to pick, according to your needs.

And a quick little almond milk recipe at the end, so you can have your very own nut milk at home ! 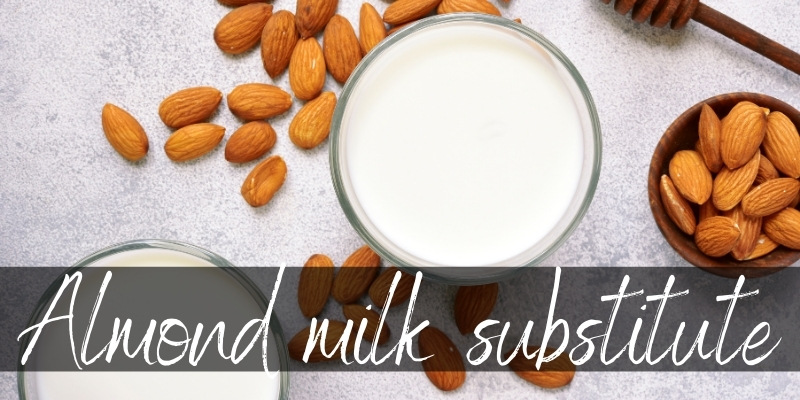 The best almond milk substitutes are coconut milk, cashew milk, oat milk, soy milk, hemp milk, flax milk, or rice milk. Which you use depends on what you need the almond milk for. Some substitutes work better than others.

Almond milk by itself provides a very earthy, deep flavor and is usually found in its sweetened form. In terms of consistency it’s not the thickest, nor is it too watery. This makes it the most balanced nut milk out there, at least of the types you can buy.

If you have any nut allergy, keep in mind that almonds may trigger it, so any other nut milk substitute will be out of the question.

And if you’re drinking almond milk because you’re lactose intolerant, then any other nut or plant milk will be good, as they don’t contain lactose either.

Now let’s take a look at each substitute.

Coconut milk may be the best substitute possible for almond milk. It’s a rich and creamy milk, in fact it’s so rich you may have to get a low fat version. Coconut milk comes with coconut butter, the same way dairy milk comes with butter (the fat in the milk).

This milk is one of the sweetest possible, without even trying. It’s just the way coconuts are. If you find the coconut milk is to thick, just add more water until you get the right consistency. 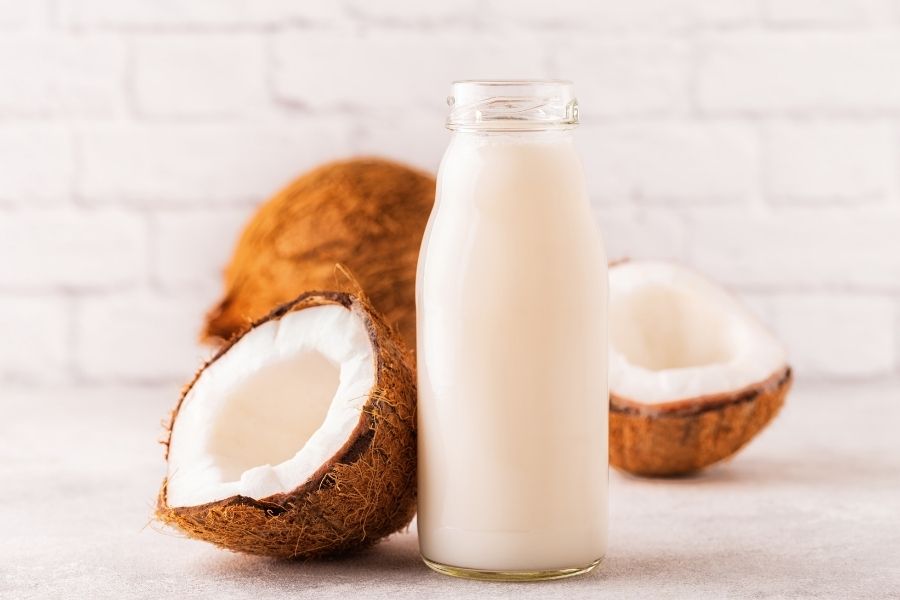 Oat milk is made from water and oats, and it’s another one of those rich milks that substitutes for almond milk very well. Compared to other plant milks, oat milk is a little bit thicker. Less than coconut milk don’t worry.

It also doesn’t impart much of a flavor and has no fat content, so it will blend very well among other ingredients.

Soy milk has more of a flavor than the oat milk, but it’s one of the highest in protein you can find. It has has a little bit of natural fat, just like dairy milk.

You’re very likely to find soy milk on the shelves, because it’s very common plant milk and is stocked pretty much everywhere.

Hemp milk is more of a recent product, but it’s right up there with oat milk in terms of consistency and flavor.

Flax milk has a very milk and nutty flavor, and it’s got a higher protein and fiber content. Very similar to almond milk, actually !

Rice milk is a little thinner in comparison with almond milk, and has a slightly salty but pleasant flavor. Its flavor is very mild compared to almond milk, but it’s a milks that often comes paired with almonds. You’re likely to find almond-rice milk in supermarkets.

Possibly the most loved milk out there, cashew milk comes with a very mild nutty flavor and a very rich texture. Thicker than almond milk, so you may have to thin it out a little if you need a specific consistency. 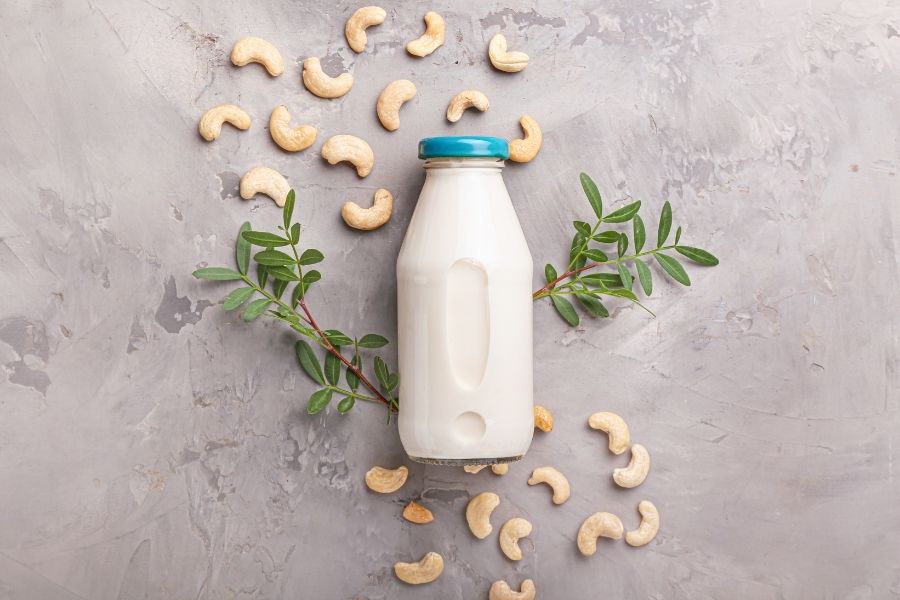 We know this isn’t a milk, but it’s an idea. Use whatever nut milk you like, and add a drop or two of almond extract. It will provide just the right amount of almond flavor, and if you don’t overdo it then it can’t overpower the recipe.

Read Also:Can You Make Pudding With Water Instead Of Milk ?

If you’re trying to cook or bake something with almond milk, then we strongly suggest you use the almond extract to make sure you fake an almond milk.

In this kind of context, you could use any plant milk, but you need to be careful and adjust the other ingredients. For example if using full fat coconut milk, you will have to reduce the added fats in the recipe. You may also need to add a little water since this milk is thicker.

If using cashew milk, know that the added fat isn’t that much and it’s only a little thicker than almond milk.

For recipes we recommend using rice milk, hemp, flax, soy, or oat. They’re the most similar in terms of texture and thickness, but you can use other milks if you like.

If you’re trying to get some nice latte art and you’re out of almond milk we recommend using oat or soy milk. The main concern with milk frothing is the way the protein and fat bind, and oat or soy milk work very well.

Much better than rice milk, or flax milk. Coconut and cashew milks are to heavy for this kind of procedure, and the foam won’t last as long.

Of course, you can still use a drop of almond extract if you really need that almond flavor, even in this case.

And if you only need almond milk to add warm milk to your coffee, then any milk will do. We highly recommend coconut milk and a drop of rum essence. You get a nice vibe that’s a cross between tropical and Christmas in your coffee. 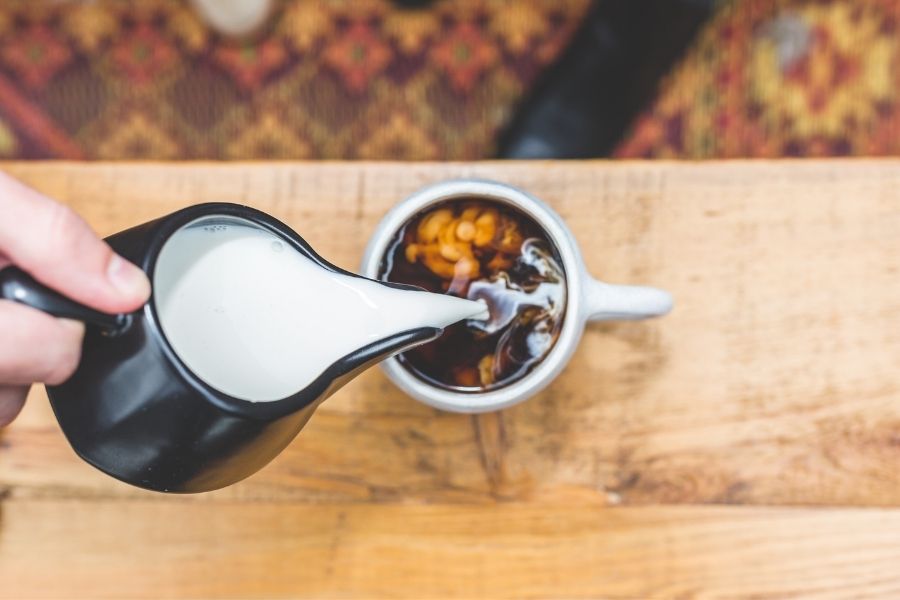 Another option is to simply use a creamer if all you want to do is take the edge off your coffee. Most creamers are vegan, and often include some form of coconut milk. If you’re lactose intolerant or vegan, be sure to check the label for lactose or milk derivates.

Make your own almond milk

If you’re feeling very DIY you can make your own almond milk, right at home. Assuming you have all the necessary ingredients, of course. If not, you can make it ahead and keep a steady supply in your fridge.

It won’t keep for very long (4-5 days), but if you or your family consume a lot of almond milk, it may be worth it. Here’s how to make your own almond milk at home.

Almond milk is very simple to make, but if you want it now it’s a bit late. You start it the night before, by placing the almonds in a bowl of cold water to soak overnight.

This hydrates the almonds as much as possible, and makes the blending easier.

The following morning (or day), transfer the soaked almonds to a blender, and add some of the water from the bowl. Add salt and any other flavorings.

Blend the almond and water with a few pulses, then let it blend continuously. Depending on your blender it may take anywhere from a minute to three.

See if you like the thickness. It’s most likely way too thick now, so feel free to add more water to thin it out. Add little by little until you’re happy with how thick it is.

When the milk is done, get a container and a cheesecloth or musslin. You need to catch the almond pulp and strain all the milk out of it. Twist and squeeze as much as you can, and you’ve got yourself fresh almond milk.

With the leftover almond paste you can make an almond meal. Simply spread it out on a tray to dry out completely. And do you know what you can make with almond meal ? Almond flour for macarons ! Or just add it to recipes for extra texture.

Wow, the more we think about it the more it sounds like we should all just make our own almond milk and skip the substitutes, haha !

So there are quite a few great replacements for almond milk but at the same time we found out that it is not that hard to make your own almond milk. So, this is a great idea if you have enough time and all the ingredients you need.

I hope this article helped you find what would be the best substitute for almond milk in your specific situation.