Ah, spinach. You either love it or hate it, there’s no real in-between. For those who love their spinach they’re likely to have it often, and in ample portions. And as you know, spinach cooks down significantly, so you always have to buy more than you’d think. But what happens when you end up with more spinach than you can eat in one sitting ?

Can you reheat spinach ? If yes, is there anything you should know about beforehand ? And how long can you store cooked spinach ? All this and more, coming right up ! 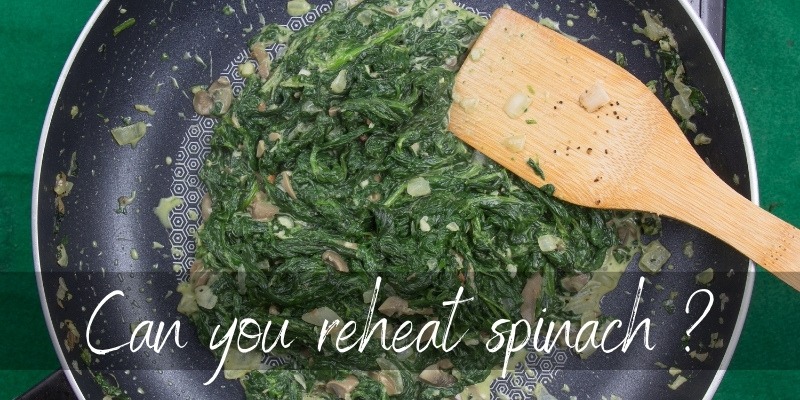 Can you reheat spinach ?

Yes, you can reheat cooked spinach as long as you use medium-low heat and make sure the spinach is piping hot. Even if it’s creamed spinach it ends up being safe, especially if it was properly stored in the fridge or somewhere very cold after cooking.

We recommend cooking spinach in small portions, since it’s easy to make, doesn’t take very long, and doesn’t store as well as other foods.

You may have heard about spinach being poisonous if reheated, and each culture has its own approach to how they cook spinach. Including whether or not it’s food you can reheat.

The main reason for this is because when raw spinach is cooked, it converts harmless nitrates into nitrites. Nitrites are commonly used to prevent botulism, so you will find them in deli meats, sausages, salami, and other foods that have been cured.

The problem is that when reheated, the nitrates can turn into nitrosamines, which may pose a health risk to those who have significant digestive issues, infants, and very old people with general health issues.

This means that, in theory at least, spinach that has been cooked, cooled, and then reheated may pose a health risk for some people. That is, one serving of spinach a few times a year, reheated, will not kill you. You have a higher chance of developing a health issue from continuously eating deli meats than reheated spinach.

Still, the European Union issued a warning against reheating cooked spinach some years ago when this scientific article claimed that there was insufficient knowledge about nitrites and their role in our bodies, including their breakdown into nitrosamines. There wasn’t really about reheating  spinach, specifically.

Currently the EU site has retracted their warning, since it was considered outdated and more of a precaution than a real risk. The Independent covered the story.

How to reheat spinach

When reheating your spinach make sure you stir it very well, otherwise you may end up with burned spinach here and there. As you’ll notice, the spinach ahs likely some leftover moisture so there won’t really be any reason to add a bit of water to reheat it. Still, if you notice your spinach drying out, add a bit of water.

The simplest method to reheat spinach is to use the microwave, of course, But be sure to use a medium-low setting, even if it takes several minutes. Stop and stir every minute or so, otherwise you end up with hot and cold patches, even on a lower setting. Only stop when the spinach is steaming and is very, very hot. Make sure to use a microwave-safe bowl on top, to trap moisture.

2. Reheat spinach on the stovetop on a low flame

Another method is to reheat spinach on the stove, and you may just need to add a bit of water here. If it’s creamed spinach you can add a bit of heavy cream or a splash of milk, it’s up to you. Whatever you use, make sure to have a low flame going, and do not stop stirring.

Eventually the spinach will heat up and start to release steam. Make sure it’s very hot, but not burned, when you take it off the heat.

How long does cooked spinach keep ?

Cooked spinach can keep for 24 hours in the fridge, and not more. This is especially true if you add some sort of dairy like for creamed spinach. The reason behind this is that spinach is a leafy green veggie and these have a real propensity to go bad very quickly, even when cooked.

So make sure you finish the spinach the day after cooking it, because the next day may be pushing it a little.

How to tell when spinach is off

This is easy enough to tell with fresh spinach, and difficult with cooked spinach. Fresh spinach is crisp, light, and bright green. As it goes off it turns mushy, wilts, and may even get slimy. A weird, sour smell may come from it. DO not eat fresh spinach that looks like that.

As for cooked spinach, it’s harder to tell because you’ve likely added something like garlic, pine nuts, maybe cream. Those can and do cover up smells and textures. It’s generally a good idea to smell the spinach, see if it smells sour or off. If it doesn’t, give it a little taste. If you detect nothing wrong, then it’s most likely fine.

But if you taste anything sour, it may be best to throw it away.

Read Also: Can You Reheat Gravy ?

Can you freeze cooked spinach ?

Yes, you can freeze cooked spinach and it can keep for up to 3 months in the fridge. Be sure to freeze it in a freezer-safe bag, and that it’s in a thin(ish) layer that can freeze quickly, and then thaw quickly. It’s not only quick but it’s also even, leading to no icy pockets when the outsides are already at room temperature.

So don’t worry about reheating your spinach., As long as it was properly cooled and kept in the fridge, it should be fine when you reheat it.

So, you can reheat spinach in a few different ways, and also it is safe to reheat. I know those myths if they have a slightly scientific explanation are really easy to make you think they are true but in this case, the reheating spinach myth remains a myth after further research.