If you’re looking for the best cheeses for a fondue you might’ve noticed an upsetting fact: cheese is expensive. Not only that, but all the good, melty, delicious cheese will make you think twice about the cost of melting a whole pound.

Why is cheese so expensive ? After all, cheese was made thousands of years ago and it wasn’t so expensive, right ? Right ? Well… in truth, cheese was a way to keep milk over the winter, but it wasn’t cheap, even then. No animal products was.

So why is it still expensive, in our day and age when things come easier and aren’t as complicated to make ? Let’s see. 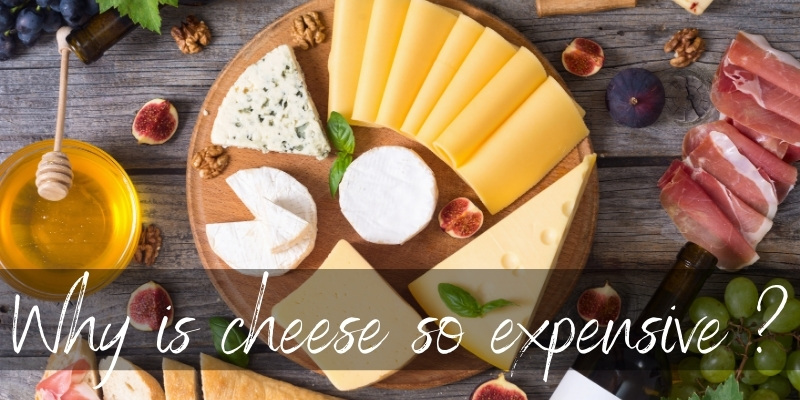 Table Of Content show
1 Why is cheese so expensive ?
1.1 Cheese takes time to make
1.2 Cheesemaking is serious chemistry at work
1.3 Aged cheeses take even more time and care
1.4 Cheese is simply delicious, was a premium item
1.5 Some cheeses have a protected name
1.6 There will always be middlemen

Why is cheese so expensive ?

Cheese is expensive because it requires a lot of milk, a lot of work, and a lot of skilled workers to produce and mature the cheese, and it simply costs to run all the lighting and heating bills to keep an even temperature.

When cheese is made, no expenses are spared. It’s a very delicate process and each degree matters, as does moisture level in the air, otherwise the cheese can turn out inedible. It’s just as complex as curing meat, as you’re dealing with bacteria and controlled mold growth.

It’s true, when you see a block of common, mild cheese can cost around $20 and you eat it in one sitting, you get a little upset.

For example mild Cheddar can go for 21 cents/oz, and then Muenster for 25 cents/oz, Provolone 36 cents/oz, and imported cheese can get to nearly $1/oz, like Gryuere or Jarlsberg.

So let’s take a look at why these prices happen, in more detail.

No matter what kind of cheese you’re making, it requires time and effort to be made. From a simple Paneer which takes hours to make, to a two year old Parmesan, cheesemakers lose money. The more the cheese roll or block sits on the shelf and isn’t out there being sold, the more money they lose.

So they have to cover their losses by marking up the price. But it’s not just marking up for the same of covering loss and green, no, it really does take lots of time. 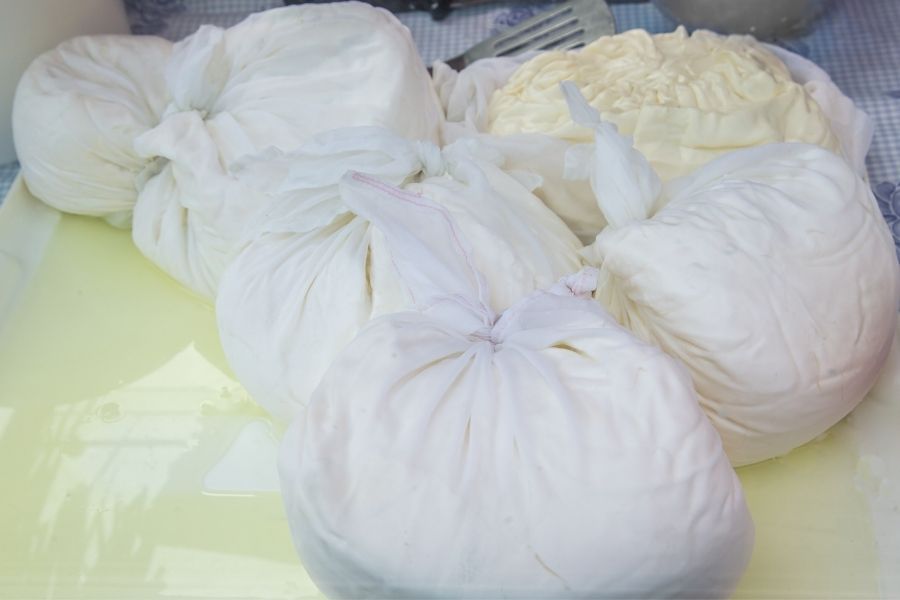 You see, when you make cheese you start with milk. The milk needs to curdle, and those milk curds will then be transferred to shaping blocks, pressed, treated with the appropriate starter cultures, and then left to ripen.

So, lots of milk is needed for lots of cheese. Not only that, but cheese loses up to 20% moisture as it ages. This means that a roll of Parmesan is judged by its final, aged weight, not the fresh weight.

Cheesemaking is serious chemistry at work

Cheese and cheese curds and separating the proteins and fats from the whey and then fusing them together is food chemistry at its finest. This means that the cheese techs have to know their stuff, which means skilled and educated workers in cheese factories, but it means another thing.

Hygiene. The utmost in hygiene, temperature control, sterile equipment, and started cultures. As cheese ages it needs change, and some cheeses even need to be washed with a brine solution, beer, or wine to mature as they should. Those are usually the very smelly yet delicious washed rind cheeses, aged for months.

Any aged cheese takes time, butt he more you age it, the better it gets. Flavors develop, buttery notes turn nutty, salt crystals form, Parmesan gets that delicious butter-like flavor, everything becomes wonderful and amazing.

But this takes time. And again, every hour the cheese rolls are not out in stores to be sold, the producers lose profit. Of course, aside from all this the very well aged cheeses need to be checked every few weeks, to make sure they’re developing properly. Otherwise the entire production will end up faulty.

Cheese is simply delicious, was a premium item

Despite cheese starting out as a practical food item, it ended up as a premium item. Maybe not as dramatic now, but here’s something to consider. Cheese as initially made as a way of preserving milk over winter, or to have milk when the cows weren’t producing milk.

But good cheese wasn’t very common, most was simple, white cheese that wasn’t really matured. The development of aged, delicious cheese came later, and with it a difference in how cheese was seen.

In medieval times, cheese was just as difficult to make as it is now, except getting that much milk wasn’t easy. You needed entire herds that were milked every day to get that much milk. Your average farmer didn’t have more than a few cows at their homestead.

Noblemen had more land and money, so more room for more cattle, so more to work with to get several rolls of cheese. It became a sort of low kay status symbol, where cheese was essential but also sort of premium.

Some cheeses have a protected name

Not all cheeses are made equally. An everyday Colby or Mozzarella are not difficult to make, and are very common and sell well. But a delicious Parmesan, or Parmigiano Reggiano is made under very strict rules. 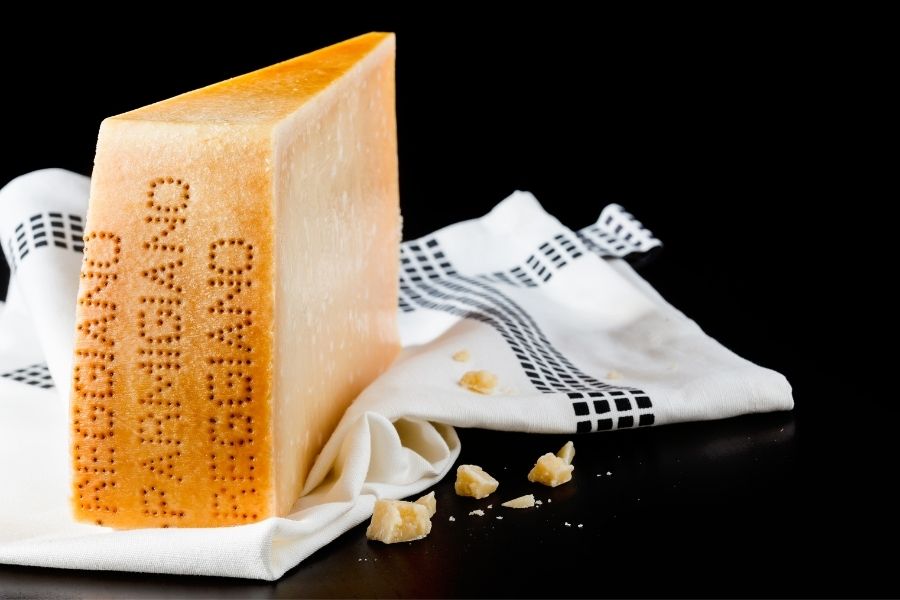 It can only be made in a specific place in the Alps, with specific cow types who have to graze on a specific pasture, all so they can produce a specific milk. Parmesan made in any other area is not true Parmesan, and you can take that up with the Consorzio del Formaggio Parmigiano-Reggiano, or Consortium for short. These guys come around each year to inspect the cheese rolls and stamp them with the original Parmesan seal.

There is such a thing as AOC, DOP, PDO, which all translate to ‘protected area denomination’, roughly. In short it means that the name of some cheeses (like Parmesan) can only be applied to cheeses that are made in specific areas and under specific conditions.

For example Jarlsberg is one such cheese, the original made in Norway. But, there is a cheese company in California that produces Jarlsberg under Norwegian license.

If you’re wondering why all of that matters, there are taxes paid for these cheeses. Either by retailers, or importers, or by the cheese companies themselves. And yes, this is reflected in the price you pay as a consumer.

There will always be middlemen

And finally, cheese is expensive for the same reason anything has a slightly higher price. Cheese goes forma  gallon of milk to a few ounces of curds to pressed into several-pound blocks, to be then aged and cut into smaller slices and sold like that.

There are middlemen all along the way, from the moment the farmer sells the milk to the moment you put the cheese in your shopping cart. All of that adds up, and if you’re buying a really nice, melty, delicious cheese it’ll cost extra.

So in short cheese isn’t a simple business, literally or figuratively. Does this mean you’re being ripped off ? No, it simply means cheese does take time and effort to make, especially if you want a really nice one.