Do you absolutely love oatmeal in the morning ? We do too, there’s just something so satisfying about feeling pleasantly full, well-fed, satiated for several hours. No midmorning snack required, we’re still digesting out oatmeal !

But why is oatmeal so damn filling ? You wouldn’t expect it, when you remember how creamy it is. Let’s take a look. 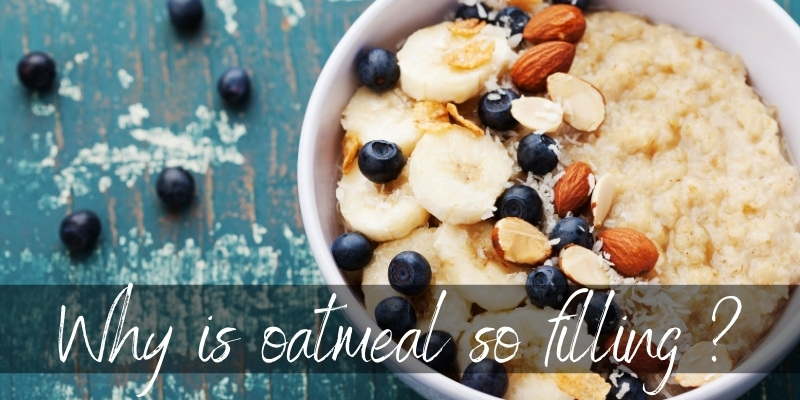 Why is oatmeal so filling ?

Oatmeal is filling because it’s very high in dietary fiber, and has a thick feel to it that contributes to the feeling well fed. Dietary fiber is necessary in all meals, and if found more on whole grain foods, in the outer skin of fruit and vegetables, and of course in oats.

This is the same reason brown rice is more filling than plain, white rice. Back to oatmeal, we should talk about its consistency. Despite oats being gluten-free, they do have some starch, same as corn or potatoes.

When you cook oatmeal and stir the pot often, you get a thicker pot of oats. And if you let it simmer long enough (or don’t add as much liquid) it gets really thick, much like mashed potatoes.

It’s that thickened liquid (courtesy of starch) that helps make oatmeal to thick. This makes it a little harder to digest, which in turn keeps you feeling full longer.

Let’s talk about dietary fiber for a moment. This type of fiber is necessary for our nutrition and has several roles. First, it holds onto carbohydrates, which means the stomach has to work to release the two and thus you get a more regulated carbohydrate intake. This slowed release means no sudden spike in blood sugar, and it also means you get glucose released slower, for a longer time.

Dietary fiber aids digestion as well, with high-fiber foods being able to aid in constipation, or help those with IBS keep things in check. This is why the BRAT ( bananas, rice, applesauce, toast) diet is often suggested for those who have loose stools. It’s not a year-round diet, but a temporary food list that helps bring more fiber.

You can find fiber-rich foods in the whole foods section, because most often you need to look for fresh, raw, unprocessed veggies and fruit, and grain. For example there is more fiber in apple peel than the flesh itself.

The same goes for oats. There’s a high amount of dietary fiber in oats, and eating these will help keep you full and may even regulate bowel movements.

What kind of oats you use matters, but only to a point. Both rolled and steel-cut oats have fiber in them, but steel-cut always have more.

The difference is that steel-cut oats are oat groats that have been cut into smaller bits, and then steamed. This keeps more of the ban on them, which in turn brings more fiber. The same way brown rice brings more fiber because it still has the bran coating.

Rolled oats have have the bran or husk removed, have been steamed, and then rolled into a flat shape. They often break into smaller pieces. They’re much easier and faster to cook than steel-cut oats, and are the ones that lead to a creamier, softer oatmeal.

If you’re wondering where instant oats fall, they’re rolled oats that have been broken down into even smaller flakes. They’re just as filling as regular rolled oats, but they cook faster.

Why is my oatmeal slimy ?

Oatmeal can get slimy-looking, but it’s not a bad thing. It really is up to each and every person’s preferences. It’s hard to make creamy oatmeal without it getting slimy., In fact, it’s not real slime but just the starch thickening the liquid you added to the oatmeal.

This can be avoided by not stirring the pot too much, but this also means you need to steam the oats just right. Usually you need 1 part oats to 1.5 or 2 parts liquid. Cooking in milk gets you a thicker oatmeal, but you need a bit of water mixed in there for the oats to expand and absorb.

And that’s about it ! Oatmeal is a very filling, delicious meal, and you can make it ahead of time and serve it for several mornings. You just need to add a bit of milk to the next-day oatmeal, and stir it in while the oatmeal is warming up. This way it won’t be all that dry and overly thick.

Why Is Brown Sugar Brown ? Here’s What’s In It

Sushi Rice VS White Rice – Why It Matters Which You Use

Is Icing Sugar The Same As Powdered Sugar ? Yes, And Here’s Why

Pancakes VS Waffles – 4 Differences Between Sweets

Does Tiramisu Have Alcohol ? Traditionally, Yes