If you’re wondering whether Gouda is a hard cheese or not, you’re probably thinking of the ways you can use it.

Maybe you are thinking of melting it, by the way, here is an article about if gouda is a good melting cheese. Or maybe you want to know if good is a hard cheese because you need a very specific cheese texture for a recipe and you don’t want to mess things up.

So this is what we’ll be tackling today – the firmness of Gouda, quickly explain how it’s made, and give you a couple substitutes you could use in a pinch. 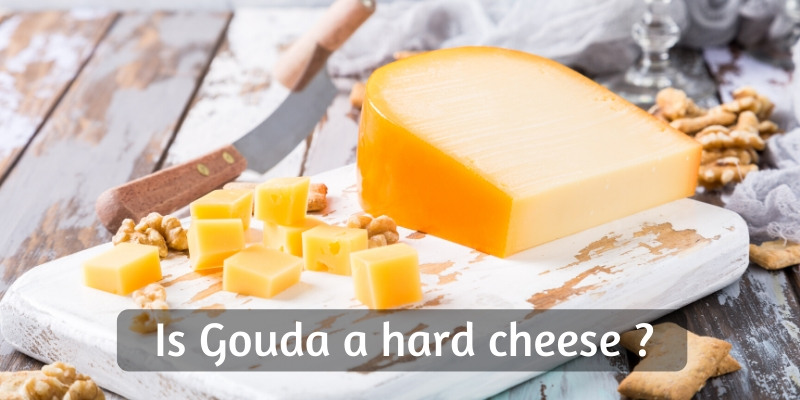 So is Gouda a hard cheese ?

Yes, Gouda is a hard cheese for the most part.

This is because Gouda is both aged and pressed, two processing methods that make cheese really firm up.

The moisture content in Gouda is very low, and it continues to lower as the cheese ages.

Taking this into account, we should note that Gouda gets progressively denser as it ages.

Usually it’s aged up to 12 months, but there are cases of 6 year old rounds of Gouda so you might find some really dense and firm cheese.

What is a hard cheese ?

Hard cheese is a type of cheese that is very well coagulated, and is formed into a very dense, thick brick.

The FDA defines hard cheese as having 39% moisture or less, and the solids should be at least 50% milkfat. (source)

As for Gouda, the FDA sees it as a very close sibling of Edam. Edam is supposed to have a minimum of 40% milkfat and a maximum moisture of 45%. (source)

So, that puts Gouda at a maximum moisture of 45%, and a minimum milkfat content of 46%. (source)

The end result is that, even by FDA standards Gouda is a hard cheese. You can find Gouda that meets the 39% moisture rule, and it’s usually going to be the aged Gouda, though not always. 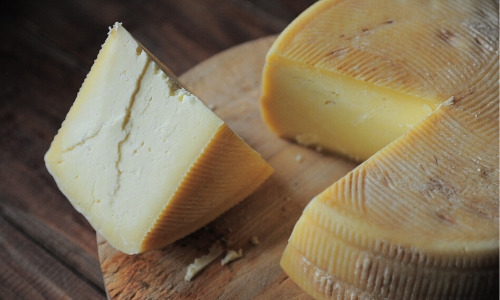 An example of a hard cheese. Dense, firm, often aged.

By pressed I mean that actual weights were used in the making of cheese, to press down upon the rolls.

This compressed them into their shapes and helped reduce moisture content (squeezing excess whey).

Another way cheese hardens is by aging.

Aging a roll of cheese will reduce moisture content, and increase the density in the roll.

Hard cheeses are often (if not always) the result of coagulation via rennet, since this process thickens the cheese much more than with lactic acid.

How is Gouda made ?

To really understand Gouda, we should take a sneak peek at how it’s made, in the first place.

This way everything’s going to make much more sense, and you’ll see how and what it becomes a hard cheese.

First, we should clarify that Gouda has become a type of cheese, and the original version comes all the way back from Holland.

It wasn’t made in the town of Gouda, but it was sold there at an annual cheese fair.

Nowadays the Gouda you find on the market is not actual Dutch Gouda, but rather a version of it. The traditional, farmer’s Gouda is still made in Holland and it’s a protected cheese, like Parmesan. 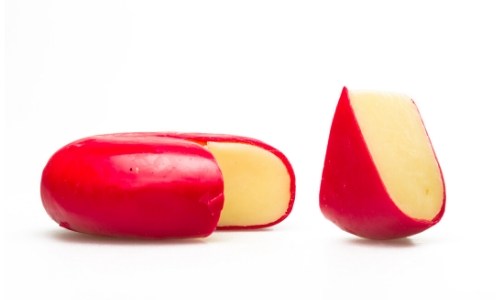 So, making a roll of Gouda.

This is done with cow’s milk, and it can be either pasteurized or not. This milk is poured into a large container, to easily make a large batch.

Then rennet and a couple bacteria culture are added tot he milk. This helps curdle and culture the milk.

Once the milk is curdled, most of the whey is rinsed out with water, and the rest is filled back up with water. This is to remove most of the lactic acid and it’s one of the main reasons Gouda has that slightly sweet flavor.

Afterwards, the milk curdles are set into their molds, and weights are pressed onto them to really get them tightly packed.

After a few hours sitting in those molds, the cheese is place in a brine solution. This is going to help in several ways:

The cheese is left in the brine for several days, after which it’s removed and dried for another several days.

The exterior is them coated with a protective film that will ensure the cheese won’t lose more moisture that it already has.

The end result is a round rolls of orange-looking cheese. When cut, the interior is much lighter but will darken and thicken with age.

As Gouda ages, it becomes progressively harder and you’ll be able to taste the actual salt crystals in the cheese in very old rolls. 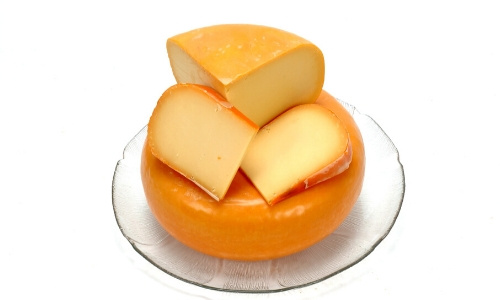 If you’re fixing to make a cheese platter or really need Gouda for a specific dish, but you have no Gouda, you can use one of these substitutes.

If you don’t have them, can’t find them, or don’t like them, know that you can use other cheese types, as long as they’re subtly sweet and nutty, with a springy texture.

Edam is probably the best substitute for Gouda, since they’re very close in recipe to begin with.

Both have a springy texture and range from semi-hard to hard cheese. Edam is made with part skim milk, so it’s got a lighter flavor than Gouda but still within the same flavor profile.

Both Edam and Gouda can be aged, so their flavors will age

Cheddar cheese is a great substitute for Gouda, especially for those living in America since Cheddar is more common there than in other parts of the world.

The reason this is a good substitute is because it’s similar in texture, and has a stronger nutty, butter flavor that is often found in more aged Gouda rolls.

A sort of Danish cheese, Havarti is also mild and nutty in flavor, with a reasonably firm texture. It’s much more punctured than both Cheddar or Edam cheese in appearance.

Gouda is a well know and loved cheese, and it’s definitely one o the best hard cheeses out there.

But it’s a damn good hunk of cheese, and definitely something you should plate up along with a good Chardonnay and prosciutto.