Paella is one of the most recognizable Spanish foods and is very much loved around the world. And much like any food, it has its own history, traditions, and people have strong preferences regarding it. One of the most common topics regarding paella is what kind of meat you put in it, or whether you add any meat at all.

Paella is Spanish, but Spain is very big and each region has its influence on the recipe. This beautiful and delicious rice dish originated in the region of Valencia, so that is the recipe we’ll be using as a baseline for this entire post. 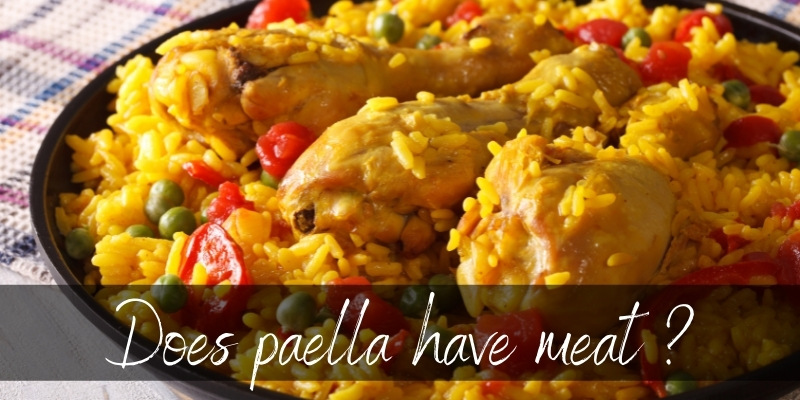 Table Of Content show
1 Does paella have meat ?
1.1 Does traditional paella have chorizo ?
1.2 Does all paella have seafood ?
1.3 Can you substitute the saffron in paella ?
1.4 A pinch of turmeric and paprika
1.5 Safflower petals
2 Key features in a paella dish
3 Tips on making a great veggie paella
3.1 Use shiitake mushrooms (and broth) for umami
3.2 Consider some fried tofu
3.3 Add peas and beans for extra protein

Does paella have meat ?

Yes, paella does have meat in it, though each region may use a different combination than the others. For example along the coasts of Spain there is often seafood in paella, whereas deeper in the territory you won’t really see this.

Paella originated in Valencia and was primarily a meal made by rice farmers. So its traditional version includes meat that can be easily found on a farm and the surrounding area, like chicken, rabbit, and snails.

This means cooking happened in an open field, on wide shallow pans to evenly cook the rice. Snails were easy to come by in the fields, and so were chicken. Vegetables were a common addition, such as red peppers, greens, corn, and lately peas.

Although Valencia is on the coast of Spain, it does not traditionally include seafood. Why ? Because this was originally a very hearty, simple meal that could be easily cobbled together by rice farmers. Rice farms were not directly on the coast, and fishing was pretty time consuming.

Does traditional paella have chorizo ?

Traditional, old school paella does not include chorizo because it’s simply too strong a flavor. Chorizo has only been introduced to paella since the seafood version has been developed. And this is only because sometimes the seafood needs a little balancing flavor, so a tiny bit of chorizo is added for extra flavor.

However when you decide to cook paella in your own home, you are the one who decides what meat to add. So if you decode to add chorizo to rabbit and chicken, no one will stop you. The very heart of paella is: delicious, easy to put together, filling. 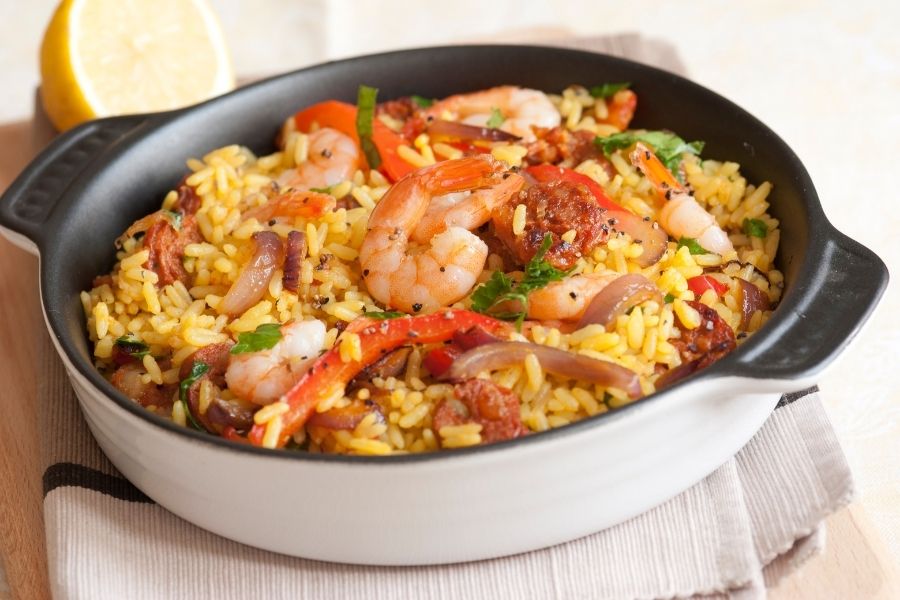 Read also: Why Is Paella Yellow ?

Does all paella have seafood ?

No, not all paella includes seafood. It’s not clear how the seafood paella came to be better known than the traditional one, but one thing is clear. When non-Spanish people think of paella, they think of seafood, rice, and a beautiful golden color in the dish.

This means when you’re ordering paella you’re likely thinking of the seafood one, including shrimp, calamari rings, baby octopus, oysters, mussels, scallops, and the ever-present surimi.

Can you substitute the saffron in paella ?

Yes, you can easily substitute the saffron strands in a paella dish with other, more affordable ingredients that provide a similar color and flavor. To do this you have to understand the color and flavor of saffron: a golden-amber hue with a slightly flowery-earhty flavor. So here’s what works best as a saffron substitute in paella.

A pinch of turmeric and paprika

Turmeric adds a nice yellow hue with an peppery and earthy flavor, while paprika adds a hint of orange-red to the yellow. If you use the paprika sparingly you’ll get the perfect color, much like a saffron-induced color.

What’s the best paprika for a paella dish ? You can get sweet, hot, and smoked paprika. We recommend adding a mixture of sweet and smoked paprika, to replicate the flavor of saffron (at least a little). If you decide to use hot paprika keep in mind it works just like any hot pepper: it creeps up on you and builds up over time. Go easy on it.

These are an easy cheat and they get you the right color, but don’t add a lot of flavor, They have a slight flowery note to them, as they are flower petals after all. But they are an entirely different plant than saffron, in fact they’re a type of thistle, while saffron is a type of iris.

Key features in a paella dish

Paella is anything but boring. This delicious Valencian dish is flavorful, packed with ingredients of all kinds and you can easily turn it vegan or vegetarian. Whichever route you go, you should always remember that a dish of paella has a:

Knowing this you can easily make your paella in a way that suits your dietary needs and preferences, while also keeping it close to the original idea.

A vegetarian or vegan paella is totally possible, and we’re going to show you a few ideas you can try for great flavor.

Use shiitake mushrooms (and broth) for umami

Mushrooms on their own can be a bit boring, especially if they’re plain ol button mushrooms. Shiitake mushrooms however have a very strong, delicious flavor that is hard to miss and will be a treat for everyone.

If you can’t get real shiitake, the next best thing is to use truffle oil, even if it’s truffle-infused oil. It has a flavor similar to shiitake and will elevate your paella dish 100%. As for the broth, remember to use a broth and not plain water.

Fried tofu adds a little extra texture and helps you get more protein in there. Now not everyone is a fan of tofu and we understand. If you’re just bored with tofu and would like to try something new, try frying a few pieces separately along with some spices like smoked paprika, garlic, and cumin. You’ll get some really interesting flavor going on.

If you’re looking to bulk up your paella, look no further than beans (of any kind). Peas, beans, chickpeas, all are great additions to a paella, be it vegan, vegetarian, or meat-based. These are actually part of the original recipe for paella, at least peas and beans.

Whatever way you decide to make your paella, remember that the key is to have fun, improvise, and enjoy your meal. So what if it doesn’t come out extra yellow ? The flavor and texture matter way more than the color.