Whether you are a connoisseur of fine cheeses or simply just trying to broaden your gastronomic horizons, you may have stumbled across a cheese you’ve never heard of before called halloumi.

Well, you are certainly not alone if you were too nervous to try this cheese without first learning a bit about it!

That is why we have compiled for you a bit about halloumi cheese’s flavor, what it is, how its taste changes depending on its aging and cooking, and some wonderful flavor pairings that you can try when making a dish featuring this interesting cheese!

So, without further ado, let’s get tasting! Come on! 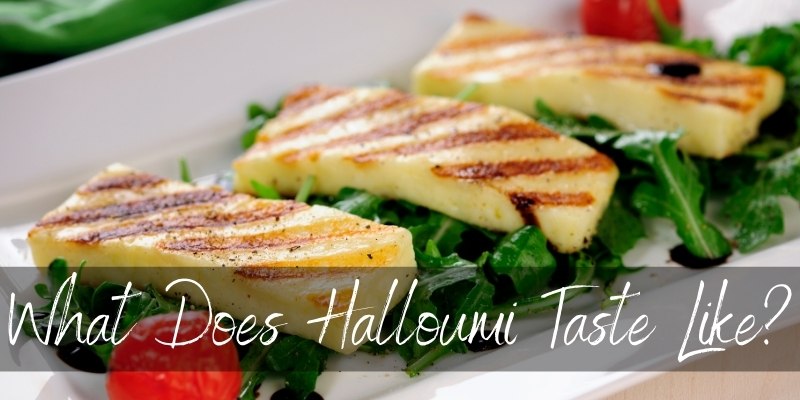 Halloumi cheese has a very fresh, milky taste, with a bit of tanginess from being brined. It is a semihard cheese, with a flexible texture and it will hold its shape during cooking, just like paneer and feta.

Due to the high salt content – more than mozzarella, but less than feta – halloumi may taste slightly bitter to some folks when uncooked.

Interestingly enough, when fresh (not cooked), halloumi actually has a mild flavor! Similar to mozzarella, fresh halloumi will certainly not cause any lasting smells around your house.

On the other hand, its flavor is a bit similar to that of feta – so, it is salty but not “SOMEONE GRAB ME A WATER BOTTLE NOW” kind of salty! This is due to the fact that halloumi is usually stored in a briny, salty water.

Halloumi is also compared to goat cheese at times because of its wonderfully tangy taste. This tang is characteristic of most soft cheeses made with fresh animal milk.

However, halloumi also gets its mild, exceptional flavor due to its production. Unlike some other cheeses, halloumi is not mixed with bacteria that release acids when formed. It is, however, mixed with something called rennet.

Rennet is used to split the watery milk from the dense cheese curds in unfinished cheeses. This too adds a bit of a bitter flavor to cheese like halloumi!

Like fresh mozzarella, halloumi’s spongy, spring-back texture comes from the way it’s made!

After using rennet, you must place the mushy curds into whey that’s been heated; this will soften it up, even more, making for easy stretching, similar to the way one would make homemade pasta!

Does Halloumi taste different when fresh or cooked ?

Yes, halloumi’s flavor does indeed change depending on whether it’s fresh or cooked! As a matter of fact, halloumi is oftentimes eaten cooked because of its strengthened flavor and softer texture!

When eaten fresh (or uncooked), halloumi cheese maintains that characteristic, half goat cheese half feta cheese flavor. It is quite mild, but still very tasty! 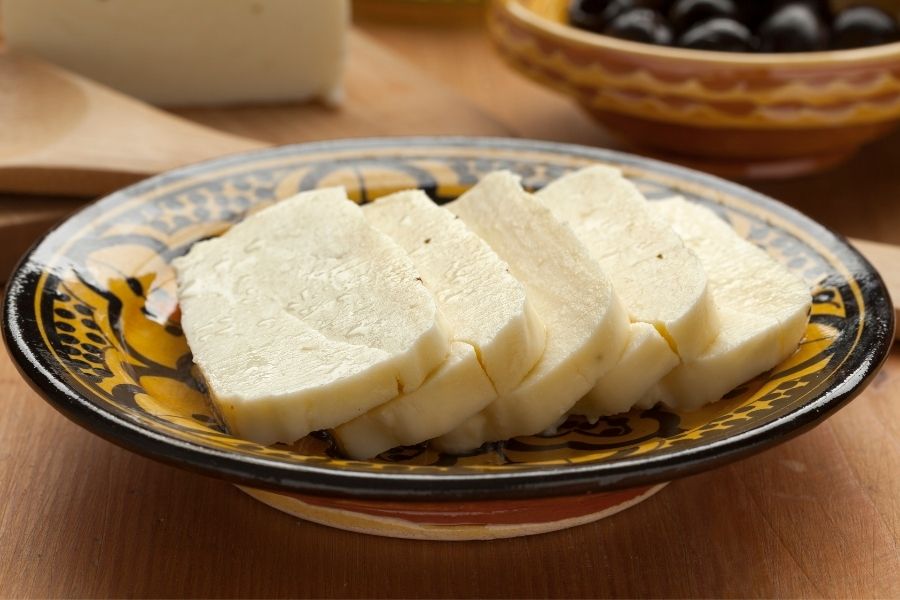 But, when halloumi is cooked, it takes on deeper, more delicious notes! And because it does not melt when heated, halloumi is a great option either grilled, seared on the stove, or fried!

When you cook halloumi cheese, its texture becomes even softer, creamier, and somehow, squeakier! As previously mentioned, halloumi is a great choice for cooking since it will hold its shape unlike drier, messy cheeses like American cheese or mozzarella!

And finally, as halloumi is being cooked, many notice that its scent changes, as well!

Believe it or not, despite having very little in common with blue cheese or gorgonzola in flavor, when you cook halloumi, many describe the arising scent as that same strong, pungent blue cheese smell.

Once it’s removed from heat, though, cooked halloumi returns to its previously mild and welcoming scent.

Does Halloumi taste different when aged ?

Like all delicious cheeses, the flavor of halloumi cheese does change when it is aged. After storing it away in a dry, cool place (that way, no unwanted mold forms on it), halloumi will adopt a stronger, more hearty flavor!

Its original notes of tang and salt will be enhanced, and it will take on additional enchanting nutty, warming notes. Plus, you will most certainly notice a slight change in the cheese’s scent when it is aged. Your aged halloumi will be slightly more aromatic and well, cheesy!

If you’ve ever seen halloumi (also spelled haloumi) at your local deli or on the menu of your favorite Greek restaurant, its strange name may have turned you away from trying it. After all, the name sounds more like some kind of cured meat than a nice, soft cheese.

But that’s exactly what it is: cheese! The name halloumi is even derived from the Cypriot-Turkish word for cheese, hellim!

Halloumi cheese was originally created on the island of Cyprus. This silky, squishy cheese actually dates all the way back to the Byzantine Empire of the middle ages.

Traditionally, halloumi cheese is made from tangy sheep or goat’s milk instead of cow’s milk, which is why it isn’t as popular in the United States as it is the Mediterranean region and the Middle East.

However, halloumi has gained a great deal of popularity as of late, leading some (us included) to wonder what exactly this unique, exotic cheese tastes like! Hopefully you’ve got your answers by now. Now let’s see what you can pair Halloumi with.

Whether or not you decide to purchase or make fresh or aged halloumi cheese, its unique flavor makes for wonderful pairings!

In Cyprus, fresh or cooked halloumi is traditionally paired with sweet, refreshing watermelon slices! This is due to halloumi’s mild, calming flavor which goes perfectly with fruit.

A traditional Cypriot breakfast consists of fresh pita bread, grilled Halloumi, sunny eggs, grilled tomato and grilled mushrooms, with some bacon on the side. This is possibly the best possible combination of flavors ever !

Halloumi is also paired with a nice, fresh salad full of dark leafy greens, fresh rosemary, pine nuts or walnuts, and even zesty sections of fresh clementine; of course, you can’t forget to drizzle some olive oil on top to finish it off! 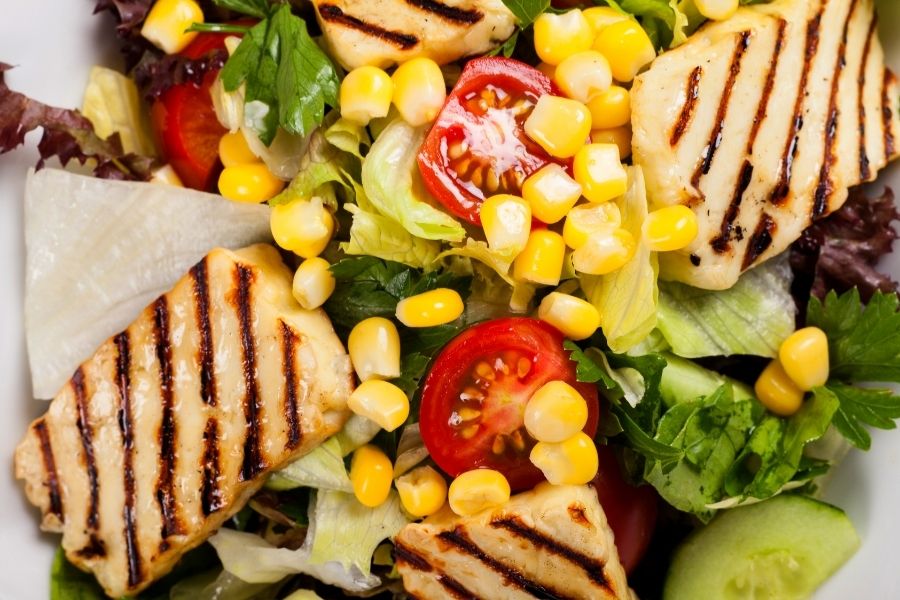 You may also enjoy adding your halloumi cheese to a Greek-style charcuterie board.

Its hearty flavor and spongy texture make an excellent substitute for meat, or simply a wonderfully delicious side dish!

Halloumi is a great-tasting cheese with a very interesting texture that is perfect for grilling. It’s impossible not to love grilled halloumi for breakfast or any other meal.

For me eating uncooked halloumi is not doing the trick so I would highly recommend not judging its taste and texture when it is not cooked.

I hope this article showed you what you could expect from halloumi taste and also what to do with it.