Tiramisu is a very much loved Italian dessert, though its history and original recipe is still hotly debated. But one thing everyone agrees on is the fact that tiramisu is coffee-based. But does it have caffeine, and if so how much ? How strong is the coffee used for tiramisu, and can you use something else in place ? Is tiramisu just going to taste like a very strong espresso ? No, actually, tiramisu is quite delicious when done right and the coffee hits just right instead of being overpowering. Let’s take a look.

Table Of Content show
1 Does tiramisu have caffeine ?
1.1 How much caffeine is in tiramisu ?
1.2 How much coffee for tiramisu ?
2 Caffeine-free tiramisu ideas
2.1 Use decaf instead of regular coffee
2.2 Skip the coffee and use a blend of cocoa and chicory

Does tiramisu have caffeine ?

Yes, traditional tiramisu has some caffeine in it from the espresso used to dip the ladyfingers in. Tiramisu means ‘pick me up’ in Italian, so the end goal was to provide a dessert that could also wake you up a little, due to the caffeine.

You can find caffeine-free tiramisu, just be sure to ask before purchasing since it’s not exactly common.

A well made tiramisu should have a good balance between the coffee, cream, and cocoa elements. It should not taste just like espresso, and it should not be overly sweet. Refreshing  and pleasantly sweet is more its area.

How much caffeine is in tiramisu ?

The original 1981 recipe for tiramisu doesn’t state an exact amount of espresso to be used, it only calls for “espresso coffee, as necessary“. But it does state espresso. The average amount of caffeine in an espresso is about 75mg, and it may vary depending on:

Modern tiramisu doesn’t necessarily use espresso, since you’d need a few cups to dip all the ladyfingers and your resulting tiramisu would have an overpowering coffee flavor. So people have started using more diluted coffee, such as filter coffee, or instant coffee, moka coffee, any sort of coffee that suits their needs. In the end, it’s the coffee flavor you need, and it doesn’t actually matter how you get it.

Based on this, to figure out how much caffeine is in tiramisu you need to know how much coffee was used, what kind of coffee method was used, and then also know your tiramisu serving’s weight, or at least how many pieces it was cut into. So let’s do some math.

Assume an 8 person tiramisu that required 200 ml of filter coffee (about 6.7 oz).

Assume 1.5 tablespoons of ground arabica coffee for those 200ml of brewed coffee. 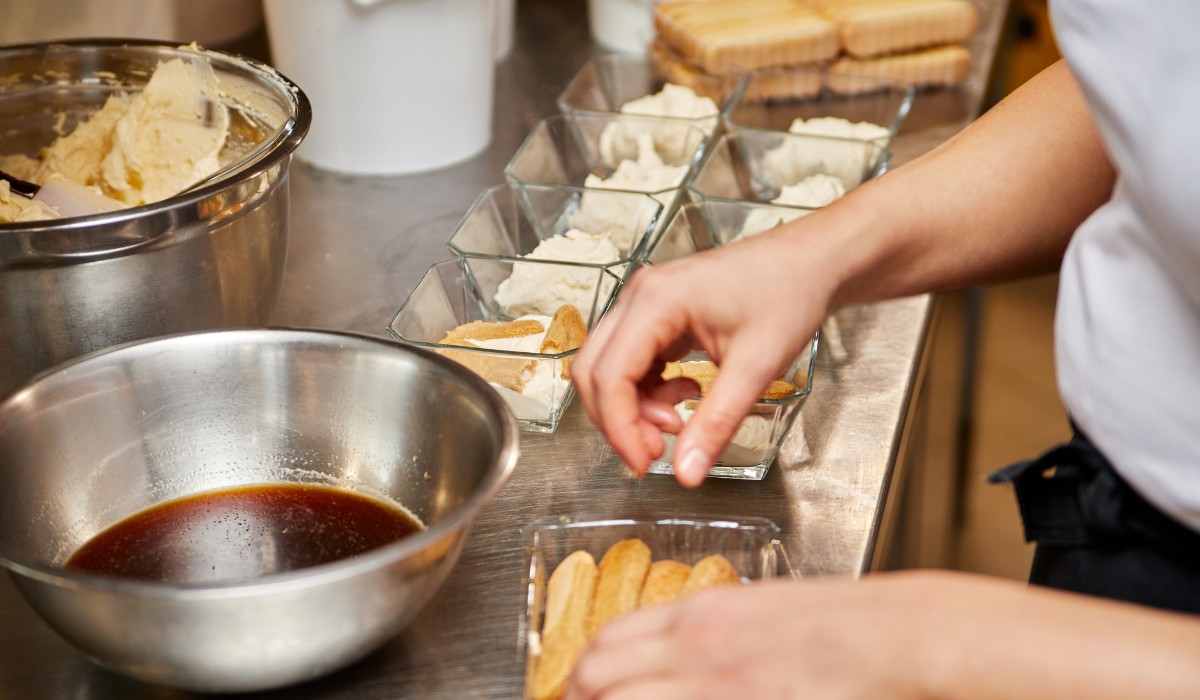 So now we just need to multiply the amount of caffeine per gram by the actual amount of coffee used, so 12×20 = 240mg of caffeine were (theoretically) extracted from the ground coffee and wound up in the tiramisu. But, in truth, not all the caffeine is extracted from the ground coffee when you brew your coffee, a little bit is left behind. Still, it won’t be a big difference, something like 220 instead of 240.

Back to the tiramisu, that means anywhere between 220 and 240 mg of caffeine are in the entire dessert. Which, as we stated above, is for 8 people. This means you’re getting 1/8 of those 220-240 mg of caffeine, which is roughly 55-60mg of caffeine per serving of our hypothetical tiramisu.

This just a way to figure out how much caffeine would be in a given tiramisu, assuming you know all the above items. The caffeine varies wildly by coffee used, coffee type, and brewing method. But you can rest assured that most of the time the caffeine amount is reasonable. if you’re making your own tiramisu, you’re 100% in charge of how much caffeine gets into it.

How much coffee for tiramisu ?

Only use enough coffee in your tiramisu as you need to dip all of the ladyfingers. This means you may sometimes have leftover coffee. Some recipes ask you for a specific amount of coffee, but in truth what you’re looking for is to dip the ladyfingers into a liquid, so they will hydrate. Whether that’s filter, espresso, or French press is entirely up to you, as long as you account for the difference in liquid.

Also keep in mind that the ladyfingers will absorb some of the moisture from the mascarpone, so don’t get them soaking wet. Just a quick dip on both sides is fine.

Whenever I’ve made tiramisu I’ve made enough for 2 people to eat twice, so 4 servings. I’ve usually used 1.5 packets of ladyfingers, which is about 10.5 ounces. And I usually needed 2 long shots of espresso, which are roughly 180ml, at least in my espresso machine. Each shot from my machine uses about 9 grams of ground coffee, so a total of 18, so my final caffeine per tiramisu iiiiis…. 216mg, assuming all of it gets extracted.

If you were to follow the exact recipe, but used weaker coffee but in the same amount of milliliters, you’d end up with less caffeine. You’re the one in charge of how much coffee to use, so you can make it far stronger or far weaker. Or you can skip coffee altogether and dip the ladyfingers in something else like hot chocolate. Have fun with it.

What if you want to have tiramisu caffeine-free ? Or just omit coffee altogether. Your tiramisu, your rules, as long as the flavor still resembles the original idea for this dessert. Here are a couple of ideas you can use when you don’t want caffeine in your tiramisu.

Use decaf instead of regular coffee

Decaf coffee is going to give you a very similar flavor to regular coffee, maybe a bit watered down. But it will give you far less caffeine per espresso shot. Decaf still has some caffeine in it, but the difference is astronomical. Where a regular shot of espresso is an average of 75mg of caffeine, a shot of decaf is about 8mg of caffeine. So if you were to use entirely decaf for your tiramisu you’d get a truly negligible amount of caffeine in the dessert, and then per serving.

Tiramisu does have a bit of alcohol in it, at least most recipes ask for a bit of alcohol. If you want to keep this dessert as safe as possible, skip the alcohol as well.

Skip the coffee and use a blend of cocoa and chicory

Another option is to not add coffee at all, and instead use a blend of chicory and cocoa or just chicory coffee. It won’t taste just like coffee, but when paired with the other flavors in a tiramisu it will be pretty convincing. 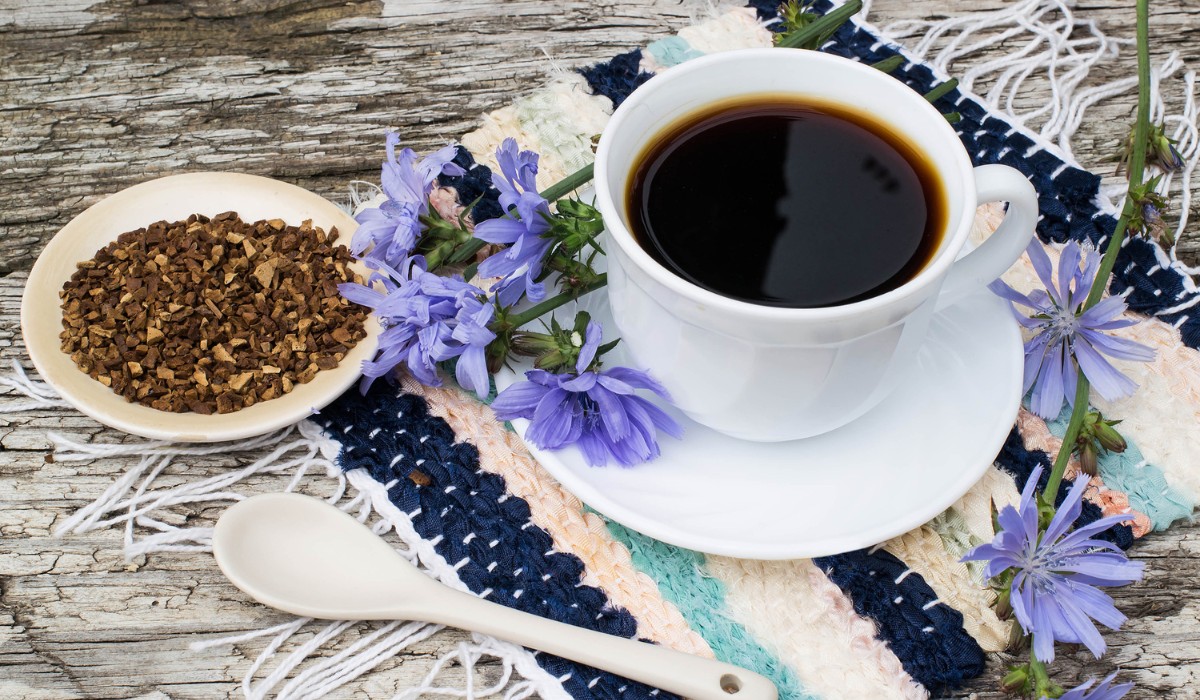 Chicory, if you’ve never had it, was a common coffee dupe when actual coffee beans were scarce. It was heavily used during the U.S. Civil War, when Union naval blockades effectively stopped coffee from being imported. So the Confederates had to improvise and they used chicory to stretch out their coffee. It became such a heavily used trick that it also became a staple.

Today you can still find chicory coffee on the South-East coast of America, and there are people who grew up with it and find it to be the best version of coffee. For the purpose of tiramisu, it’s still a good option, even if the flavor is not the exact same. You get bitterness, you get earthiness, you get a vaguely vegetal flavor too, along with a similar color to coffee.