Hollandaise sauce is one of the key sauces in French cuisine, and one of the most common sauces used around the world. It’s rich, creamy, and pairs well with just about anything. But does it contain dairy ? And if yes, is there a way to make hollandaise dairy-free ? Would it just be mayo at that point ? I’m also going to cover how to tweak this sauce, depending on whether you want to avoid dairy or want to avoid lactose. So let’s take a look. 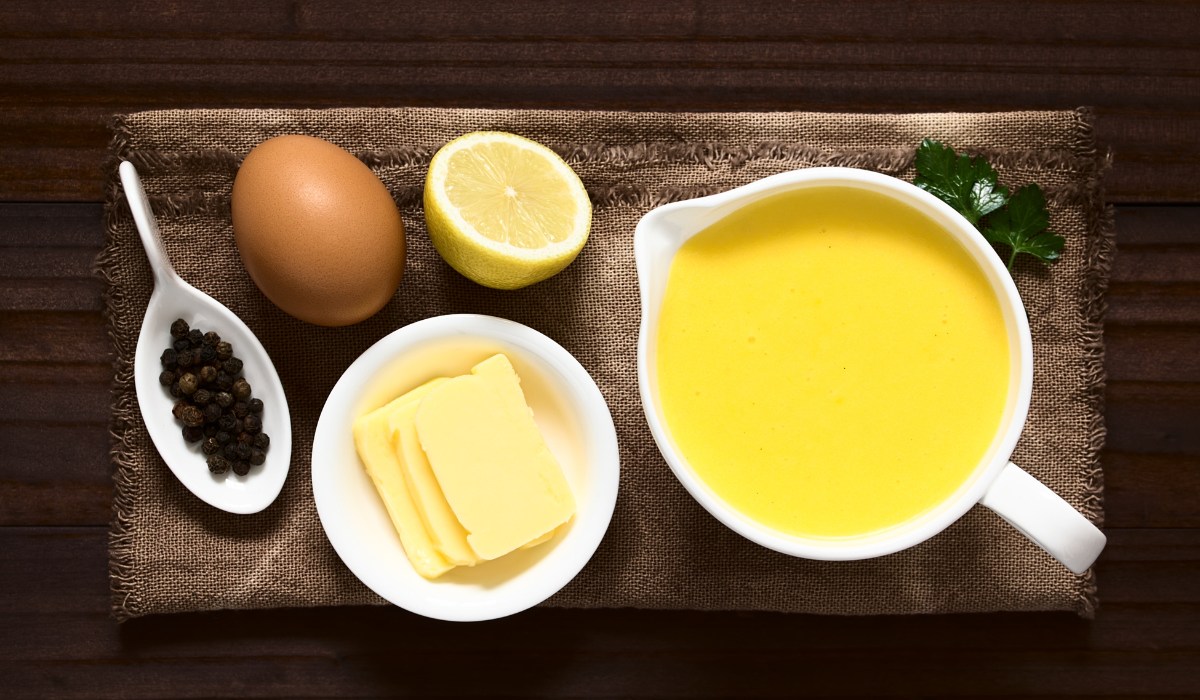 Hollandaise sauce in its true form does have dairy, in the form of melted butter. Hollandaise sauce uses egg yolks, melted butter, lemon juice, salt and pepper, and a dash of paprika at the end. The butter still contains lactose so it will not be safe for someone who want to avoid lactose.

The butter in the hollandaise is what keeps it from simply being mayo. The flavor and texture in this sauce are different from mayo, smoother and richer due to the milkfat.

Does hollandaise sauce have cream ?

Hollandaise does not have any other dairy in it other than butter. It’s easy to confuse the look of a hollandaise sauce with heavy cream, but it’s very different from actual cream. That being said, hollandaise sauce is one of the key French white sauces and you will easily find variation on the original hollandaise, and they may sometimes simply be labeled as ‘hollandaise’ when, in fact, they are a very different sauce. Let me explain.

Read also: Does Tiramisu Have Caffeine ?

Hollandaise sauce is a very simple sauce, and a very old one at that. The French have several sauces that are used as a base for hundreds of sauces, each with tis own name. Of all the sauces, the ones based on hollandaise sauce that also incorporate some other form of dairy are the following. Take note if you want to avoid any sort of dairy in your sauce.

Creme fleurette, which uses creme fraiche. There is significant debate for non-French speaking people, mostly over exactly what kind of creme fraiche to be used since most of the time it means sour cream, but then the sauce creme fleurette talks about it being liquid. After scouring the internet for longer than I thought it’d take, I’ve gathered that sauce creme fleurette uses what most English-speaking countries class as whipping cream, so a variation on heavy cream. You need the cream to be liquid, not fermented, and at least 30% fat because it need to whip.

Fleurette is French for ‘little flower’ or a diminutive derived from flower (fleur). So this variation on the hollandaise sauce needs to be piped, and it relies on the creme fraiche to achieve that.

Another variation on the hollandaise is the creme mousseline, or creme chantilly. But this one works a little differently. You need pre-whipped cream to fold into an already made hollandaise sauce. The resulting texture should be smoother, lighter, and quite airy. You need very gentle folding motions so as not to ruin the texture. The names (mousseline or chantilly) both allude to a very light, airy texture, similar to Chantilly lace or muslin cloth.

Yet another hollandaise-based sauce is the Bavaroise, with a hollandaise base and adding cream, horseradish, and thyme. The result is a mildly spicy and pungent sauce, best used for heartier dishes involving red meat, game, and some starches.

And finally we have the sauce noisette, a hollandaise using browned butter instead of regular melted butter. All of these variations on the original hollandaise are known for adding some form of dairy, aside from the butter.

So if you’re looking to avoid as much dairy as possible, also avoid these sauces hollandaise variations (noisette, Bavaroise, chantilly, fleurette).

Can you make dairy free hollandaise ?

Using lactose-free butter will bring you the closest to the original hollandaise flavor, and will also retain most of the texture in your sauce. Unfortunately lactose-free butter isn’t the easiest to find so you may find yourself ordering it online or scouring the stores. It still classifies as dairy so if you want to avoid any sort of dairy, whip up some mayo.

Your other option is to simply use cooking oil in place of melted butter. The end result will be mayo instead of hollandaise, but there’s no other way to make hollandaise but with dairy. If you do decide to use cooking oil, maybe don’t use olive oil since it can get a bit bitter when mixed like this.

Whichever sort of sauce you make, you can still drizzle it over eggs Benedict and with the right seasoning it won’t make a terrible amount of difference. Both mayo and hollandaise are quite good.