Wondering what the key differences are between Thai and Indian curries ? While they both share the same name, Thai curry has evolved and adapted to suit Thai palate and as a result it’s very different from Indian curry. There are several differences and I’m going to walk you through them, but keep in mind that both types (Indian or Thai) can be extraordinarily hot and they can also be very mild and sweet. Always ask your server about the heat level, never assume something is mild ! Now let’s compare the two.

Overall, this difference in flavor, texture, and ingredients makes Thai curries a lighter, sweeter sort of curry that can definitely be incredibly hot when hot chilies are added. Indian curries are also hot, but half that heat comes from the spice blend itself contains liberal amounts of ginger, cinnamon, and hot chilies, among other things.

The general flavor of Thai and Indian curries is quite different, starting with the basic ingredients used in their spice mixes. The spices used in most Indian curries result in a denser, earthier flavor, especially when compared to Thai spices. 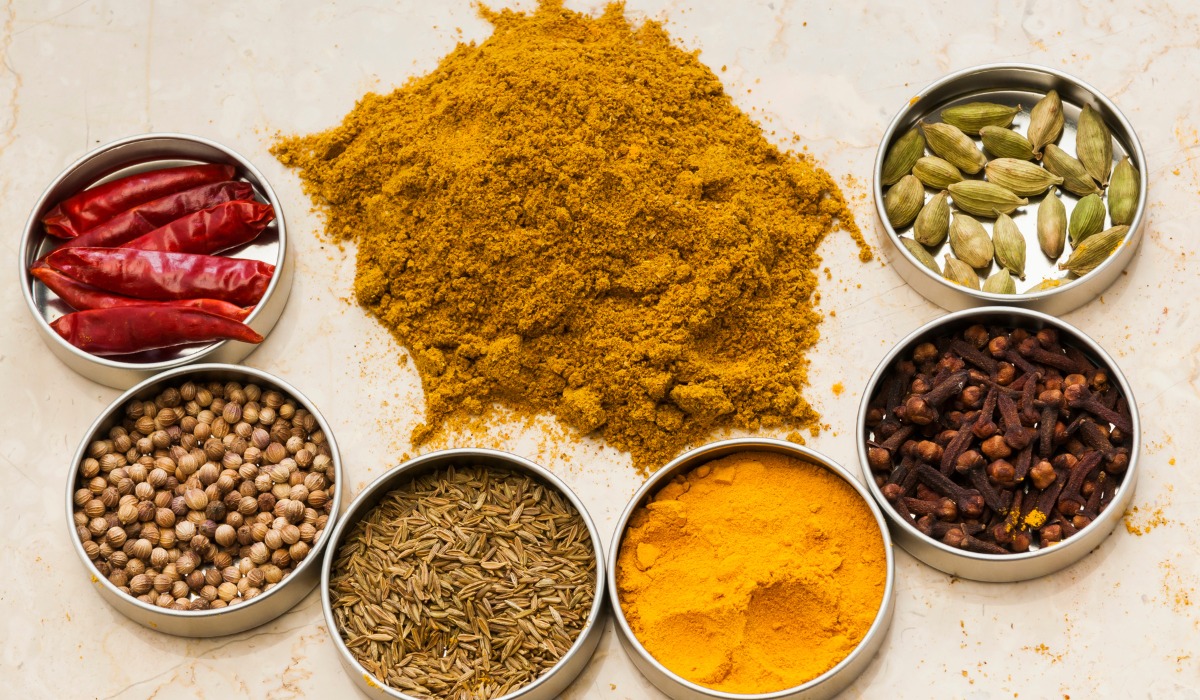 Typical Indian curry spice base. Each region has different add-ons to this base.

Turmeric, coriander, and cumin and three of the most common ingredients in an Indian curry base (among other spices) and they tend to give a hearty, earthy aroma. The addition of mutton, lamb, or goat in most cases further keeps the flavor profile in a dense, gamey, earthy area. Of course, all of these are lifted by the addition of cinnamon, cloves, sometimes ginger, garlic.

Thai curries are more of a light, floral, fruity flavor. They’re not strawberry jam, but they do often incorporate citrus notes, tamarind (sweet and sour), galangal (similar to ginger), ginger, with a splash of coconut milk.

Read also: The Difference Between Curry and Masala

Indian curries use a very different set of spice mix than Thai curries. Each region on India prefers a certain spice blend over another, but throughout the subcontinent the most common base for a curry mix is made of coriander, turmeric, cinnamon, cloves, garlic, cumin, cardamom, and the curry leaf. There are many more spices added to this blend, and some may substitute a spice for another, leading to wildly different curry flavors. In all cases, Indian curries result in complex, bold flavors that work together to bring flavor and very often a lot of heat. 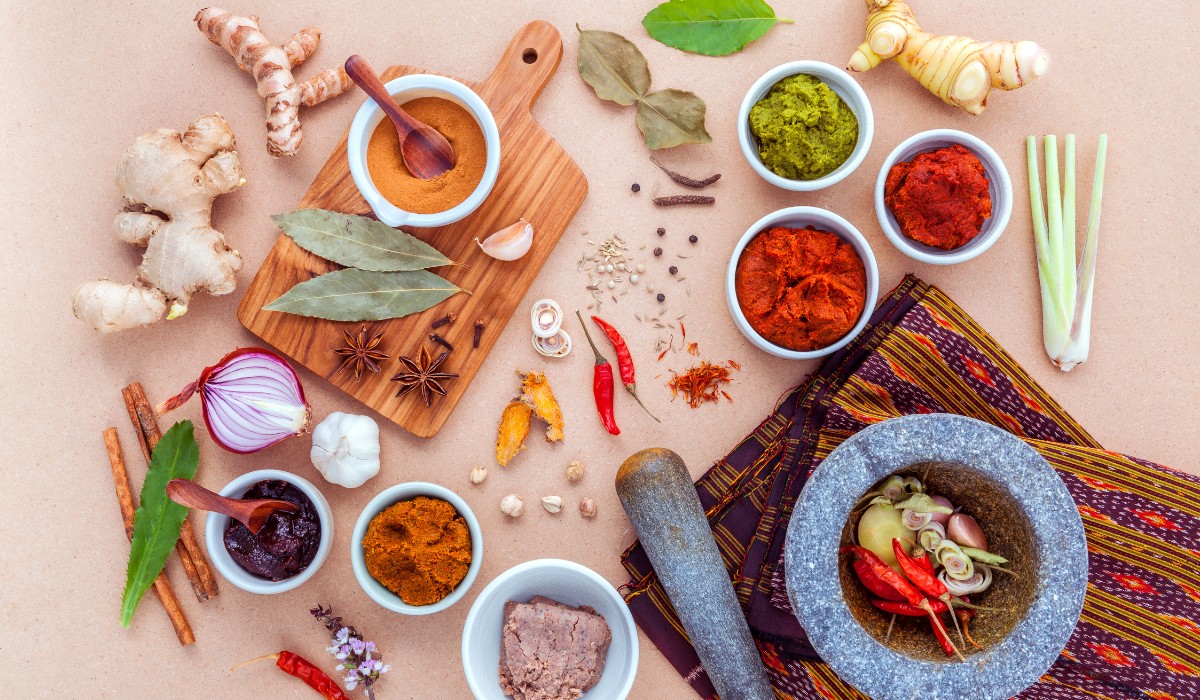 Typical Thai curry ingredients. May be added in any amount and combination.

The method of adding the spices is also very different. Indian curries use dry, ground spices that may sometimes be roasted before grinding. Thai curries use ‘wet’ ingredients that are ground into a fine paste before adding to the pot to simmer.

Thai curries rely on spices and flavors that are locally available, such as galangal, shrimp paste, kaffir lime, tamarind, lemongrass. Both Thai and Indian curries may use ginger, hot chilies, and coriander seeds. The result is a lighter, brighter flavored curry that isn’t as strong or overwhelming as most Indian curries are. The addition of coconut milk, common in Thai curries, adds a sweet note that you won’t find in many other curries.

Indian curries tend to be thicker than Thai curries

Texture is quite different in Thai and Indian curries. Where Indian curries tend to be thick and consistent, Thai curries are more soupy, thinner. Some Indian curries are very thick and resemble more of a dry rub, but most of the time they’re the consistency of gravy. This is largely due to the starch that comes off potatoes, lentils, the thickening power of tomato sauce, onions cooked until they break down, and generally simmering until most of the liquid has evaporated.

Thai curries are far more liquid, and they can be simmered until most of the liquid evaporates, but then the ingredients come into play. Thai curries use seafood more often than not, which requires very short cooking times. So most of the time the curry is more akin to a thick soup.

Indian curries, like much of Indian cuisine, relies on chicken and mutton for its protein. This is reflected in the final flavor of the curry, and often in the cooking method. Mutton, lamb, goat all need longer cooking times than chicken. Seafood is not common in Indian curries or cuisine, expect perhaps the coastal regions of the Indian subcontinent. But overall, it’s not the preferred meat for most meals.

Thai cuisine uses seafood far more often than any other South East Asian cuisine, especially prawns and shrimp. Chicken may be used but isn’t preferred, and this is also true for Thai curries. Fish sauce and shrimp paste are also commonplace in Thai cuisine, including in curry. So the resulting curry will be bright and light due to the sweeter, brighter spices used, and offer some umami and seafood notes as well. It’s more of a refreshing light curry than a hearty, heavy one.

This doesn’t mean Thai curries leave you wanting, they’re just as filling as most other curries.

Coconut milk is a shared ingredient between Thai and Indian curry, so if you’d like the kick of an Indian curry but miss the lightness and sweetness of a Thai one, consider replacing half the cooking liquid (or all of it) with coconut milk.

Overall both Indian and Thai curry offer you that amazing blend of spices and flavors, but they do so differently. There are Thai curries with significant Indian influences, especially in the spice blend used and the proportions of each spice in the curry. And there are Indian curries, especially near the coast, that are similar to Thai curries.