Adding more fish into your daily diet can be quite tricky, especially if you don’t have the time or disposition to cook fish. So that leaves you with canned fish, tuna being the most common (and delicious). You may be wondering though, does tuna have any bones in it ? Is there a difference between canned tuna and tuna steak, when it comes to bones ? Are some types of canned tuna more likely to have bones ? Are they a choking hazard ? Let’s take a look.

Table Of Content show
1 Does tuna have bones ?
1.1 Tuna steak is pre-cut, it has no bones
1.2 Canned tuna may have a rogue bone or two
1.2.1 Canned tuna does come with a bone warning
2 Is the bone in my canned tuna dangerous ?

Does tuna have bones ?

The tuna fish does have bones, both large and small. Like salmon, tuna is a large enough fish that the bones are easy to see and remove. In most cases, the tuna you eat has already been gutted and filleted, and any bones have been removed. Tuna steaks have no bones in them, big or small. The only tuna that may have a bit of bone is canned flaked tuna, due to the nature of the meat used for flaked tuna.

If you’re worried about sashimi and nigiri tuna having bones, don’t be. Sushi-grade tuna is the finest tuna and is thoroughly checked for any issues, including bones. After all, this meat is meant to be eaten raw, so bones are a no-go for sashimi tuna.

Tuna steak is pre-cut, it has no bones

Tuna steak has already been cut off the fish and any bones have been removed, long before you cook your steak. These steaks are a bit of a premium, so extra care is taken to make sure there are no bones or odd bits of fat or skin left on the steak. You can safely eat tuna steak without fear of finding a bone. 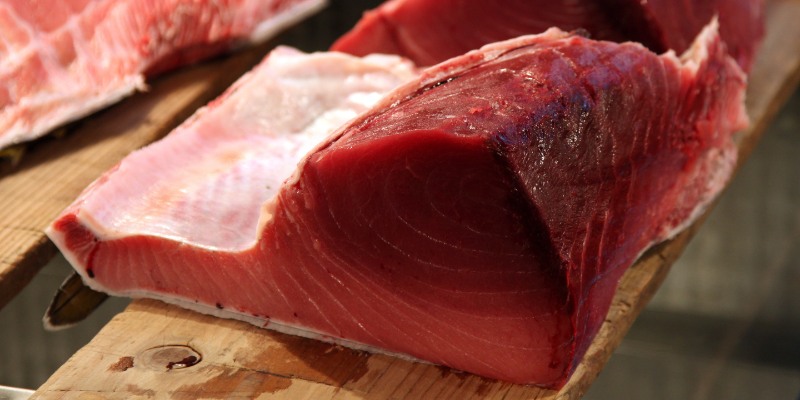 Tuna loin, to be cut into steaks

When a tuna fish is caught and filleted, the top part of the fish (the spine) is removed with care, and those are the largest bones. Tuna steak comes from the loin of the fish, which has fewer bones. Even so, those bones are carefully removed, either before the steaks are packaged or before they are cooked.

Read also: Do Shellfish Have Bones ?

Canned tuna may have a rogue bone or two

Bones in canned tuna are a rare occurrence, but if they ever are present in the can, it’s the shredded/flaked tuna, not the chunk. The reason is that tuna flakes or shredded tuna are the result of leftover meat from cutting up the larger pieces of fish that are sold as steaks. Some pieces are large enough to be used as chunks, and canned as such. But most of the tine, the pieces are so small they look like shredded meat, hence the tuna flakes/shredded tuna cans.

This second type of canned tuna is the one most likely to have a bit of bone within it. It’s never on purpose, and it’s very rare, but if it does happen it’s the result of the meat scraps being so small they sometimes hide a small bone or cartilage within them.

If you want to be sure your canned tuna has no bones in it, you should look for chunky tuna. Those don’t have bones, and if they somehow do end up with a bit of bone, it’s easy to spot between the many layers of meat. Manufacturers label tuna chunks and flaked tuna very differently, so a quick glance at the label should tell you what you’re buying.

Canned tuna does come with a bone warning

Canned tuna is a household staple for many people, and manufacturers know this. So there is a warning on most canned tuna, but especially on the flaked tuna cans, that there may be small bones inside. The manufacturing process is pretty automated, but the meat used is cut up by humans. Some reasonable errors may happen, as not all tuna fish are the same, some have more or less meat, and the people gutting and cutting the fish have varying degrees of skill.

Most of the time though, your canned tuna will be fine. If you’re very worried about bones, stick to tuna chunks and you have virtually zero chance of finding a bit of bone in the meat.

Is the bone in my canned tuna dangerous ?

The bone in canned tuna isn’t dangerous, as it’s often so small it’s unlikely to be a choking hazard. Even so, if you’re uncomfortable with the bone, you can remove it from the can and check the rest of the flakes for bones. This is always the safest option.

If the tuna was meant for your pet, the small bone shouldn’t be an issue either, unless it’s one of the long, thin pinbones that are very flexible and can even choke a human. It’s always best to inspect the tuna before feeding it to your pet, just to make sure that any possible bones are not a threat.

Again, if you want to be 100% sure you’re not getting bones in your canned tuna, get tuna chunks, not flaked or shredded tuna.