Shellfish are tricky little creatures. They look very alien and taste and smell very different from what we’re used to, at least compared to land animals. So, when cooking shellfish you may expect them to behave a little differently than other meats. You may expect to find bones in shellfish, just like in fish.

But do shellfish have bones ? They’re so much smaller, and seem to be built very differently. And what’s that vein in shrimp ? And why are shellfish cooked live ? All this and more, coming right up.

Table Of Content show
1 Do shellfish have bones ?
1.1 Crustaceans
1.2 Mollusks
1.3 Shellfish may carry more toxins
2 Is shellfish an invertebrate ?
3 Can you eat shrimp tails ?
4 What’s the vein in shrimps ?
5 Why are shellfish cooked alive ?
6 Conclusion

Do shellfish have bones ?

Shellfish do not have bones, despite having the word ‘fish’ in their name. In fact, shellfish are completely soft on the inside, and their meat is very different from any other animal. They have nothing like bones, or a backbone.

Shellfish have their skeletons inside-out, relying on their tough shells as armors. There are two kinds of shellfish, and they’re built very different but still share that trait.

Crustaceans are the type of shellfish that have their bodies segmented, such as lobsters, crabs, shrimp, and prawns. They usually have several pairs of feet, which are not really edible. When the outer shell is removed depends on what you’re cooking. For example shrimp and prawns have their shells removed before they’re cooked. Crabs and lobsters have their removed after cooking, since they’re typically cooked alive.

Read Also: Does Salmon Have Bones ?

Conversely, the shell is a bit flexible and can be split open with a strong kitchen scissor. Their outer armor turns orange-pink-red when exposed to high heat. This is the pigment’s natural reaction to heat. When fresh and raw, crustaceans are a shade of grey-green-brown.

Prawns and shrimp have thinner armor, so they will appear blueish-gray, while crabs and lobsters have opaque shells.

All in all, crustaceans are possibly some of the most commonly sold and eaten shellfish.

Mollusks are a different type of shellfish, in that they are a much simpler organism. They have a simple outer shell, made of two halves that open and close, and they rely on a single muscle to push themselves around. Where crustaceans easily move about and even swim in water, mollusks are mostly stationary and are often found in clusters., together. 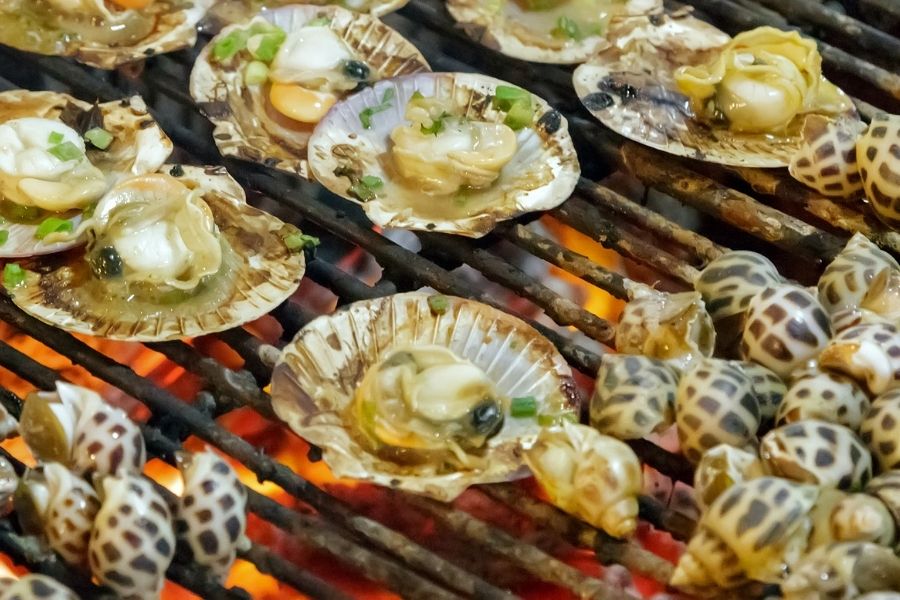 The most commonly sold and eaten mollusks are oysters and clams, scallops, with two surprises: octopus, and snails ! Snails are closer to oysters than octopus, but are not part of the shellfish discussion so we’ll save them for later.

And octopi are, indeed, part of the Mollusca phylum, though they’re a far cry from what people normally mean when they say they had mollusks for dinner.

Neither mollusks nor crustaceans have bones, so you can eat them without worry. What’s interesting though is that they can have a really strong flavor, and it really depends where you source them from.

You see, shellfish live along the coast, and this means they live in waters that are often contaminated with waste. Usually the coastal currents manage to wash away the waste. It’s the shellfish that contribute to cleaning the waters of bacteria and microorganisms, but often the waters are so polluted the shellfish can’t handle all of it.

And on top of this, coastal waters often have waste from chemical plants, or waste that will eventually poison the fish. The shellfish can easily get poisoned this way, and carry said poison back to you, when they end up on your plate. This is why getting your crustaceans and mollusks from a reputable source is important. Always check the harvest place when buying seafood !

Is shellfish an invertebrate ?

Invertebrates have simpler, soft flesh that has no muscle fibers. Think of calamari rings, or snails. They will often end up rubbery when cooked, because they are much simpler and softer and are easy to overcook.

Can you eat shrimp tails ?

No, shrimp tails are made of a type of chitin that may be chewed but will not be fully digested by your stomach. It’s best to pull off the shrimp tails when cooking, or simply stop eating once you reach the tail.F

What’s the vein in shrimps ?

The vein in a shrimp is simply its digestive tract, from mouth to anus. This means that the thin, black line contains digested food and waste. Most cooks remove the vein, and this is fairly easy to do with large and jump shrimp. The smaller ones almost always have the vein left in, since it’s a very time-consuming process.

Why are shellfish cooked alive ?

Shellfish spoil very quickly, which is why they’re cooked alive. At least the larger ones, like the crustaceans. They carry bacteria, like every other animal, but their bodies break down so fast when out of the water that you only have a few hours to apply high heat and cook them.

Is it humans to cook them alive ? Definitely not. More and more research has been made, leading to results that suggest that crustaceans may actually feel pain, but in a different way than other animals.

So what can you do with that lobster wriggling in your kitchen ? Well the most humane thing is to kill it quickly by destroying its nervous system. This can be done either through an electric shock, or by sticking a sharp knifer expertly in the back of its head.

We’ve never done either of those before so we cannot offer you any instructions, but we’re sure there are tutorials online.

And that’s pretty much it about shellfish and their non-existent bones ! As seafood, they might become your next favorite thing, since there won’t be any bones to pick off your plate. This makes eating much simpler, but don’t be fooled. Prepping shellfish is a bit tricky and it takes a while to master the methods.