Tuna is possibly one of the best kinds of fish you could ever get your hands on, and it’s so easy to spot in a seafood aisle ! Commonly sold in its deep red version, tuna just shines brighter than anything else. The only other option that would maybe catch your eye is the orange-red salmon.

But why is tuna red ? Does it come in any other colors ? Is it any better because it’s red ? And what about the deep red, nearly black spot in the middle of some tuna steaks ? Let’s take a look at how and why tuna gets its color. 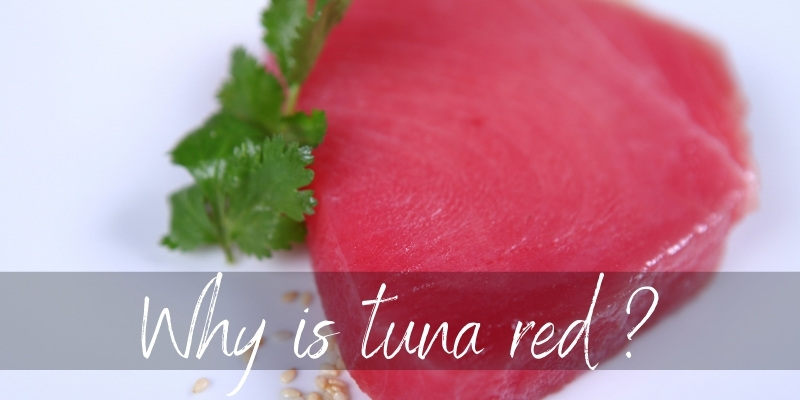 Table Of Content show
1 Why is tuna red ?
1.1 Myoglobin gives tuna its color
2 Is red tuna better ?
3 What’s the black stuff in my tuna meat ?
4 Why is canned tuna white and pink ?
5 What color should tuna be when cooked ?

Why is tuna red ?

Tuna meat is usually red because it’s usually Atlantic bluefin tuna, which is a constantly moving fish that continuously oxygenates its muscles, hence the deep red color. There is a protein in all muscles, called myoglobin. This protein carries oxygen into the muscle tissue, helping it regenerate and withstand continuous use, like a sort of marathon. This gives the meat its deep red color.

You may also find lighter-colored tuna, such as Albacore tuna. It’s named so because its meat is, yes you guessed it, white or very light pink. This fish has quicker movements, darting here and there. Even so, Albacore tuna is not completely white but has some red muscle closer to its spine, since those muscles must always move.

Myoglobin is responsible for bringing oxygen into the muscle tissue, and as you may know there are white and red meats. The red meats are a type of muscle that are continuously used, for slow but constant movement. This is why cattle and game have deeper, red meat, as they are always on the move but do no necessarily have to sprint.

White meat has much less myoglobin, because it’s used differently as a muscle. It relies on glucose to provide it with a burst of energy that is quickly used up. It does not require as much oxygen as red fiber muscle. It’s also the type of muscle that is the easiest to train and grow larger.

Back to tuna, different tuna species have different behaviors. Some are slower moving, in that they do not have bursts of speed but instead move continuously in large migrations. And some are more stationary but dart quickly for their food.

The red tuna meat may catch your eye more, since it’s admittedly better looking than the regular white fish meat. It’s got a better flavor, more reminiscent to beef and is vaguely sweet when cooked.

White tuna by comparison is less flavorful and may appear as bland because of this, even though it’s tuna. The thing is, tuna is not a very fishy tasting or smelling fish, so a white tuna will seem too flat in flavor. In terms of nutritional content, there is no significant difference.

What’s the black stuff in my tuna meat ?

If your tuna is red, then you may possibly find a deeper red, nearly black portion. It could be towards the middle, or towards the side of the steak, depending on how large the fish was and how it was cut. The darker meat in tuna is simply a heavily oxygenated meat, with more amounts of myoglobin than the other parts.

To check if it’s still good, make sure the meat does not smell off, is not slimy, and does not have blood clots here and there. Normally a tuna steak is more flavorful in the darker areas, so keep that in mind.

If you’d like a lighter, milder flavor then you may want the white tuna, or the lighter parts of the tuna steak. Keep in mind that tuna is a very filling fish, despite being just fish. And the darker parts are more filling than the lighter ones, so plan your portions accordingly.

Why is canned tuna white and pink ?

Some canned tuna companies use multiple parts from different fish. Usually they will use the same kind of tuna, but each fish is a little different. A pink meat will have more myoglobin, while still qualifying as white meat. Some Albacore tuna will be a little pink, and they’re still fine. 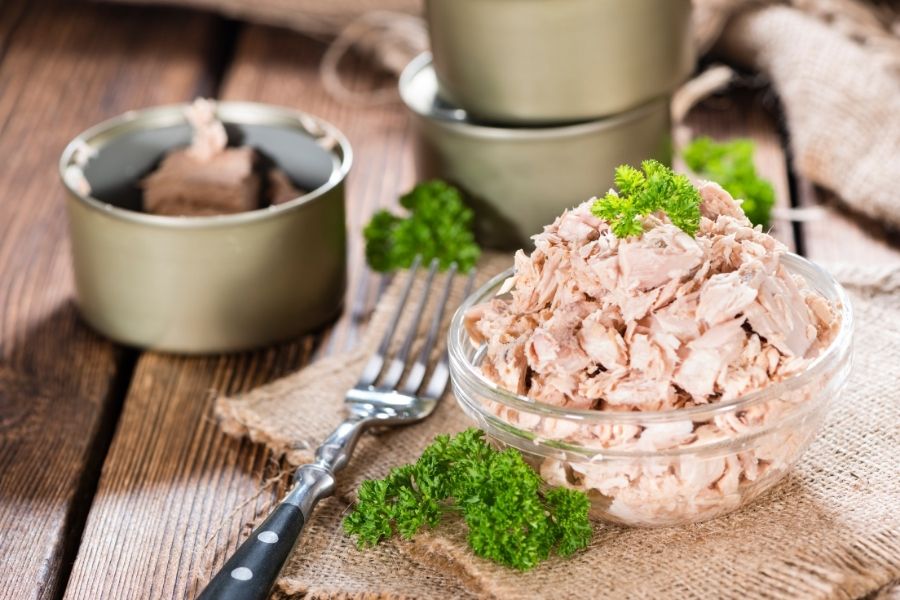 What color should tuna be when cooked ?

Exactly like a steak or duck breast, tuna should be reddish-pink inside and have a white ring around the outside. As both a red meat and a fish, it needs to be seared lightly on both sides. This meat is not meant to be cooked long, since it loses its flavor and texture.

Conversely, white tuna is much harder to pinpoint when done, but it’s still possible. The outside will be opaque, while the inside should still be a little translucent. For white tuna, the best method is to time it, about 2-3 minutes on each side for an inch-thick steak. Make sure the pan is screaming hot, just like you would cook beef.

And just like beef, it has a clear, strong, meaty flavor so be sure to add a bit of flavor to it, or use a flavorful garnish. Rest the meat a couple of minutes before cutting into it. Unlike beef, you won’t get a lot of juices but it still has some so it needs to rest a little.

And that’s pretty much it for tuna ! It’s a beautiful fish, a little more expensive than salmon, but totally worth the money. It’s not every day you get tuna, so make sure you cook it perfectly whenever you do get your hands on some. Remember, overcooked tuna is a sad story, it’s better to undercook it if you’re not sure.