Wondering why fresh tuna is so much more expensive than canned tuna ? Is it really the same fish, in the can and in the steak ? How is canned tuna any different, and is fresh tuna overpriced ? Well it turns out there’s quite a difference between canned and fresh tuna, and it’s not just the can. Read on. 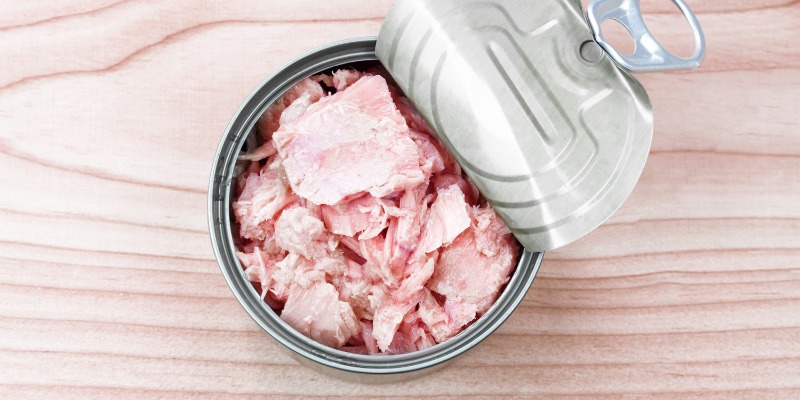 Why is canned tuna so cheap ?

Canned tuna has a longer shelf life than fresh tuna, and is usually made of a lower grade tuna (albacore) than fresh tuna (bluefin). Half the time the meat used for tuna is the scraps leftover from carving the fish, which is what you get in canned shredded tuna. All of these combined result in a much lower production cost for canned tuna, as it’s easily made, lasts longer, and can reach more people than fresh tuna. Fresh tuna has a time limit (1-2 days), otherwise it will be frozen and shipped farther inland.

Overall this doesn’t make canned tuna bad, it simply makes it more accessible to the general public. If you want fresh tuna, you can either pay premium for tuna that’s caught and served today, or pay less for frozen tuna (still more than canned tuna). This is the deal with all seafood, not just tuna by the way. salmon is the exact same story, except it’s smoked salmon not canned. Now let’s get into more detail for each of those reasons.

Canned tuna can sit on a shelf for far, far longer than fresh tuna. This means canned tuna is a more reliable commercial product than fresh tuna, and you can mass-produce it without fear of shelf life. This drives the overall cost down.

The flipside is that fresh tuna, like any other fresh fish, spoils quickly and should be eaten in the next 1-2 days after it was caught. This means extra shipping costs if you’re not very close to a place that has fresh tuna (like far in-land), and the premium that comes with the whole idea of fresh meat of very high quality. The fish caught fir fresh tuna is different than the one used for canned tuna. We’ll get to that in a bit.

Overall there’s a quality difference between canned and fresh meat, regardless of it being tuna or chicken or pork. Fresh meat will always taste better than canned meat, and for fresh meat you need the best quality cut of meat. You can’t serve the scraps, but you can make shredded canned meat, which is half the canned tuna on the market.

So fresh tuna is a delicious hunk of freshly caught fish, while canned tuna is either made from the scraps (shredded tuna) leftover from gutting the fish, or from a lower quality tuna fish altogether (tuna chunks).

Read also: 3 Reasons Seafood Is So Expensive (Plus What Is Seafood Anyway ?)

Canned tuna is a different meat than fresh tuna

There are two main types of tuna on the market: albacore and bluefin, and you can find either of them as fresh or canned, but each of them is better suited for just one. 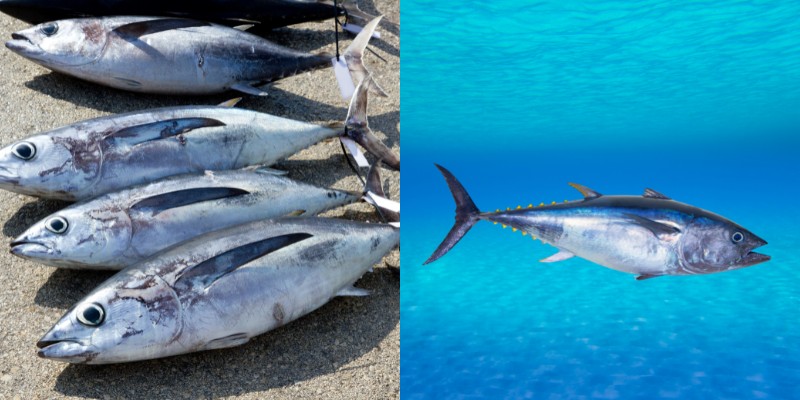 Albacore is a very easy to catch tuna, but is smaller and has lower quality meat compared to bluefin. This makes it great for mass-producing canned tuna, though you can also find albacore steaks if you want. Albacore meat is pale pink, or rather much whiter compared to the deep raspberry color of bluefin steak.

Meanwhile bluefin is superior quality meat, but a larger and more agile fish, much harder to catch and thus the yield is much smaller. This puts a premium on it, and this tuna is mostly reserved for fresh tuna (or steaks). You may find canned bluefin, but very rarely and it will be made from the leftover bluefin meat (scraps).

You can still make sushi with canned tuna

One of the biggest markets for fresh tuna is the sushi market. Whether it’s nigiri (thin slice on top of rice) or maki/uramaki (meat inside the roll) you still get fresh tuna if you ask for fresh tuna. But you can still use canned tuna, you just need to be smart about it.

A nigiri won’t work with canned tuna, but a maki or uramaki will work just fine with canned tuna. Shredded tuna seems to work best here, since it can be molded into any shape you want.

Please drain the shredded tuna before you add it to the sushi ! You’ll get far better results.

The best pairing we’ve seen is canned tuna with fresh cucumber, though you could also pair it with avocado, or spring onions, or a bit of spicy mayo. Or just have the canned tuna on its own, just the rice, nori, and tuna all rolled into one.

Read also: How To Reheat Tuna ?

Canned tuna is always cooked before sealing it in the can. The usual method is boiling the tuna, and then storing the tuna in brine or olive oil in the can. In either case the tuna is safe to use and eat straight out of the can, you just may want to drain it. Both the brine and the oil are there to help the tuna last longer, preventing oxidation.

So if you’re wondering if you can eat the tuna straight out of the can, you definitely can do that. You may just want to drain it first. You’re not ruining the fish by cooking it into a meal, such as tuna pasta or tuna fishcakes, the meat will be just fine.,

Canned tuna is really versatile, even if it’s not fresh tuna. We’re not knocking fresh tuna, not at all. We’re just saying canned tuna is still good, and can still be used in dishes that may sound more delicate, if you get a bit creative.