Omelettes are delicious and there are so many recipes out there you don’t know which to pick. You’ve definitely stumbled upon the idea of a French omelette, and an American omelette. What is that distinction, how are they different ? If this one of those mine is better than yours things ? Well, no.

The French and American omelette are simply two distinct ways of cooking an omelette, and they have the exact same starting point: whisked eggs, and hot butter. And that’s where they go very different routes, ending in two delicious breakfasts. Let’s compare these two classics and discuss omelettes in general. 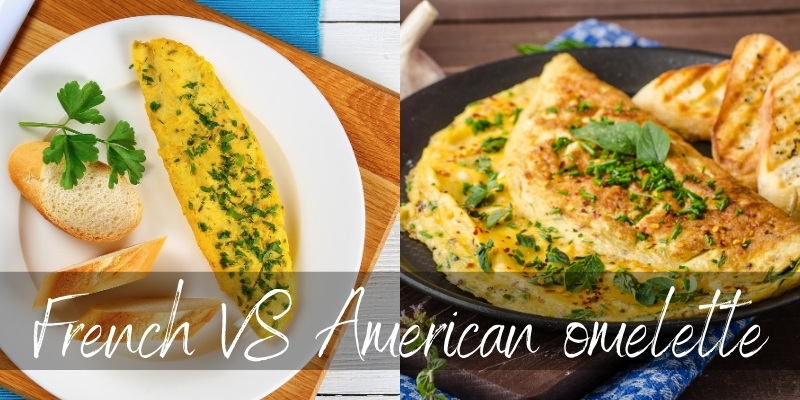 French omelettes are a creamy egg mixture, and its technique focuses more on skill, speed, and the perfect temperature. American omelettes are simpler to make and result in the common, fluffy egg curd mass most people think of when they say ‘omelette’.

Fillings and toppings are another key point here. Because of a French omelette’s need to perfectly cook the eggs as a creamy mix with a thin outer layer, any fillings you add will ruin the process. American omelettes do feature toppings, usually in their fold. They sometiems have a filling, in which case they are similar to an Italian frittata.

Both the French and American omelettes are staples of a good, filling breakfast, as well as scrambled eggs, frittatas, and tortillas patatas.

The biggest difference between a French and American omelette is the actual technique involved. They both start out with the eggs already well beaten in a bowl. Butter is melted in a pan.

A French omelette involves pouring the beaten eggs, with just salt and a bit of pepper, into the melted butter in the pan. Then, on a medium-low flame, the omelette is continuously shaken, stirred, and even whisked until it resembled more of an emulsion. The egg curds do not fully form, but the hot butter does cook the egg.

The result is a very creamy, slightly runny egg mixture that may seem still raw to the untrained eye. There is a lot of pan and fork movement, and the pan is often taken off the heat to prevent a layer from coagulating until the final moment.

Read also: Can You Reheat Pancakes ?

Once all the egg mixture is cooked, it’s left to form a thin layer or skin underneath, in contact with the pan. Then, slowly and with the aid of a spatula (a fork will break the skin), the omelette is rolled onto itself, in a shape resembling an oval. Some cooks add a bit of butter wo this last process to prevent the omelette from sticking and make it easier to maneuver.

The end result should be a fairly oval, smooth-skinned omelette that is pale yellow. It’s then gently jiggled onto a plate, with the seam side underneath. A difficult omelette but something to be proud of.

The American omelette is by far simpler, and requires less skill. The whisked eggs are poured into the melted butter in the hot pan, lightly whisked to incorporate that hot butter. The it is left on a medium-low heat to cook through, about 3-5 minutes. As the top part becomes opaque and almost completely cooked through, it is folded, and then slipped onto a plate to be served.

Aside from the vast difference in cooking methods, another way to tell these two omelettes apart is by looking at them. Because of the way it’s cooked and presented, the American will always be a golden-brown, slightly crispy affair. Sometimes it’s not folded, but instead flipped with the bottom side up 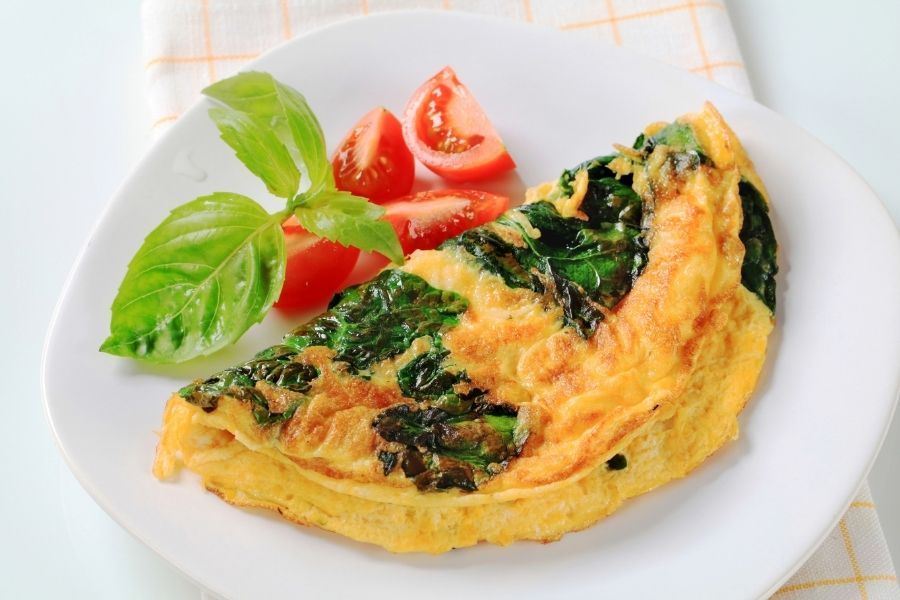 The French is a pale yellow, because it’s not left in the pan long enough to start developing a crust. The outer skin is necessary only to contain the creamy interior. If you were to cook it longer, the inside wool cook more and would no longer be creamy. Eggs are tricky, ya know ?

3. French omelettes are creamy, have no fillings

The very texture of an omelette will also tell you what you’re eating. Is it creamy and fairly smooth, like a custard ? It’s a French omelette. A French will also have no fillings, since it cannot cook evenly and remain creamy. Anything else you may want to add will be either a topping or on the side, but never a filling if you want to cook it right.

An American omelette also has no filling, rather once it’s done cooking various toppings are added on one side, and then it’s folded so the toppings are in the middle. Sometimes you can find actually fillings like cheese, bacon, mushrooms, peppers, etc. Then it’s a cross between a frittata and an American, but most (including us) would still consider it an American omelette.

Butter is a key ingredient in both

Whichever omelette you decide to cook, you need a key ingredient: butter, lots of it. The more you add the creamier the omelette. In a French omelette the hot butter whisked into the eggs creates an emulsion, like a low-fat mayo with a lot of eggs. Said emulsion is then continuously stirred and a bit of heat is applied here and there.

If you were to not use butter in a French omelette but still stir it, you’d get scrambled eggs. The butter is crucial for the emulsion, and cooking oil will create a different result.

In an American omelette the butter is whisked into the eggs too, but not as much and not as vigorously. About half the butter is left on the outside, to cook the omelette. The eggs will absorb the butter anyway, so it will still have that rich flavor.

And because one incorporates the butter in to the eggs, and the other mostly fries the mixture in butter, there is a significant difference in flavor.

Why is it called French omelette ?

The French omelette is called French because this version originates from France. When and how the very first French omelette was made is unclear, but it is quoted as being French in nearly all cookbooks.

There is a story about Napoleon Bonaparte first tasting an omelette in an inn, and the ordering his army to make a giant omelette the next day. Due to the way a French omelette is made, a giant version is impossible to get right (creamy). This is the basis for the giant Easter omelette, a big omelette cooked by several cooks at once every easter in France. And it looks very much like the standard, American omelette. 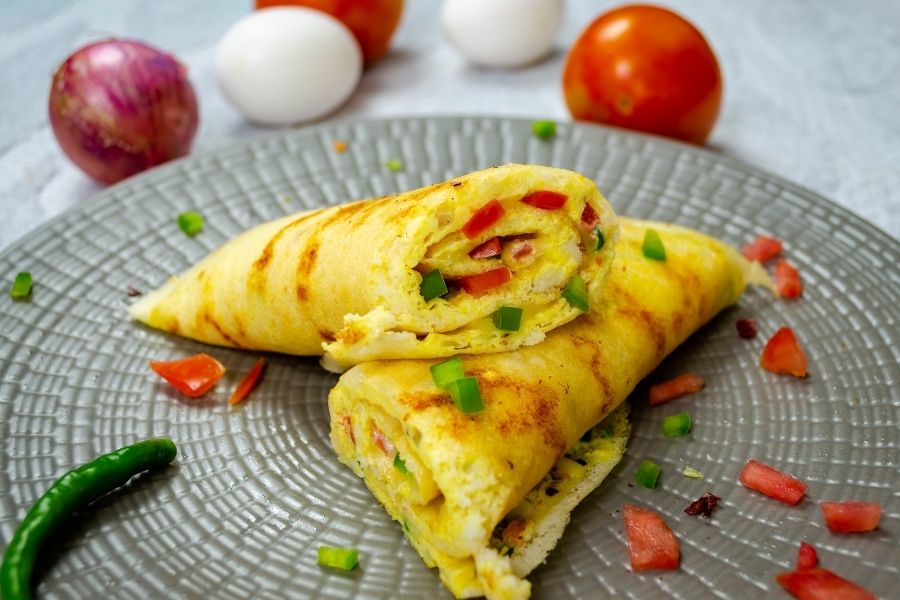 So what does this mean ? It simply meant that the names are, actually, irrelevant and don’t really point to the true origin.

Rather the names (French and American) came about simply as a way to differentiate the two styles.

Who made the first omelette ?

The very first recorded omelette, or a dish as similar as possible, was actually made in Iran. Actually ancient Iran, then known as Persia. It was known as kuku, and had different versions that included herbs, eggplant, potato, or roe. It’s still cooked today and it resembles more of a frittata, in that the batter is fluffy and it has a lot of filling.

In the end, the first, true omelette is lost to history. It’s like trying to find out who invented roast meat, or mashed potatoes. The most basic and effective forms of cooking any ingredient have been discovered all over the world, at different times.

When you look at a French omelette and see how creamy it is, you may wonder if it’s raw. It’s not raw, it’s simply cooked differently because all the proteins are surrounded by the extra fat from the butter. This prevents them from coagulating into curds, especially since they’re continuously stirred and whisked.

So no, a French omelette is now raw, it’s cooked. It may look soft and runny, but it’s not runny eggs.

Should you add milk to an omelette ?

No, do not add milk to an omelette if you’re trying to get a creamy, moist one. The milk will only add more moisture to the omelette, leading to a longer cook time and an omelette impossible to flip, or even fold, because it’s too soft.

If you want your omelette fluffy and soft, which the eggs with the butter very well. Then turn the heat to medium-low, and put a glass lid on top. Let the omelette sit for about 5 minutes. It should be almost completely cooked through.

Shake the  pan a little to see if anything is jiggling. If it is, add 2 more minutes. Don’t turn up the heat.

How many eggs for an omelette ?

We recommend 2 eggs per adult person when making an omelette, regardless of any fillings or toppings you want to add. A 1 egg omelette isn’t going to cook well, but it’s totally possible.

Any omelette with more than 6 eggs will need a pan bigger than the standard 12 inch/30 cm diameter one. This is because it gets very fluffy and you need more room to stir and whisk.

And that’s it ! You now know the finer points of French and American omelettes, and their main differences. They’re both delicious but if you’re in a hurry you may want to stick to the quick and easy American. On the weekends you can indulge in a creamy, rich French omelette.