Are you staring at a breakfast menu and can’t decide ? Often the names on most menus aren’t very descriptive, so you have to look at the small print. It’s just that some establishments don’s have that small print, especially when it comes to breakfast.

So what do those three hotel breakfast types mean ? What’s the difference between an continental and an English breakfast ? Is one cheaper than the other ? Are any of them free ? Let’s take a look. 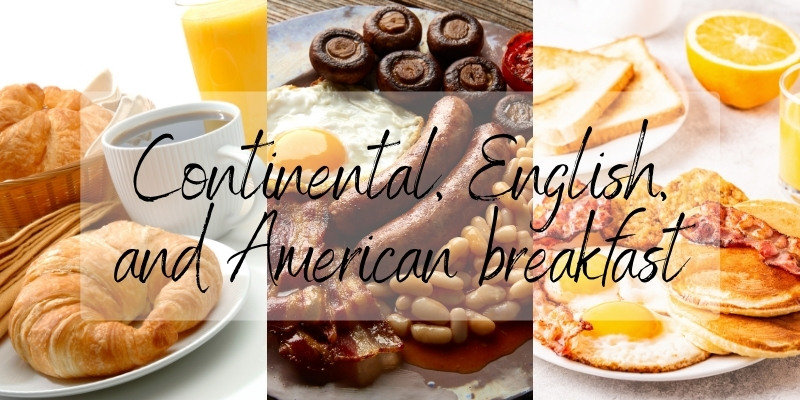 Continental vs American vs English breakfast

The main differences between the three hotel breakfast types is that continental usually has no cooked food, and is lighter. American and English breakfast have cooked eggs and some form of meat, and from there they diverge into various bread types, sides, and drinks.

Continental breakfast is light, buffet-style, and usually cold or room temperature. American and English breakfasts are either buffet or come as a pre-made serving that you pick up.

And finally, English and American breakfasts are heavier, more filling, higher in calories. Continental breakfast is very mix-and-match and can range from light to a plate piled high.

Most hotels offer continental breakfast as their standard, with English as an optional breakfast. Now let’s explain all of these to make it clear for everyone what to expect when a hotel claims they have this or that style.

What is continental breakfast ?

A continental breakfast is a light, buffet-style breakfast made up of:

You usually serve yourself and can select from a wide variety of food items. How wide depends on the hotel and how expensive and well managed it is. If there’s ever a free breakfast, it’s usually continental because it requires minimal effort from the kitchen staff and is relatively cheap. 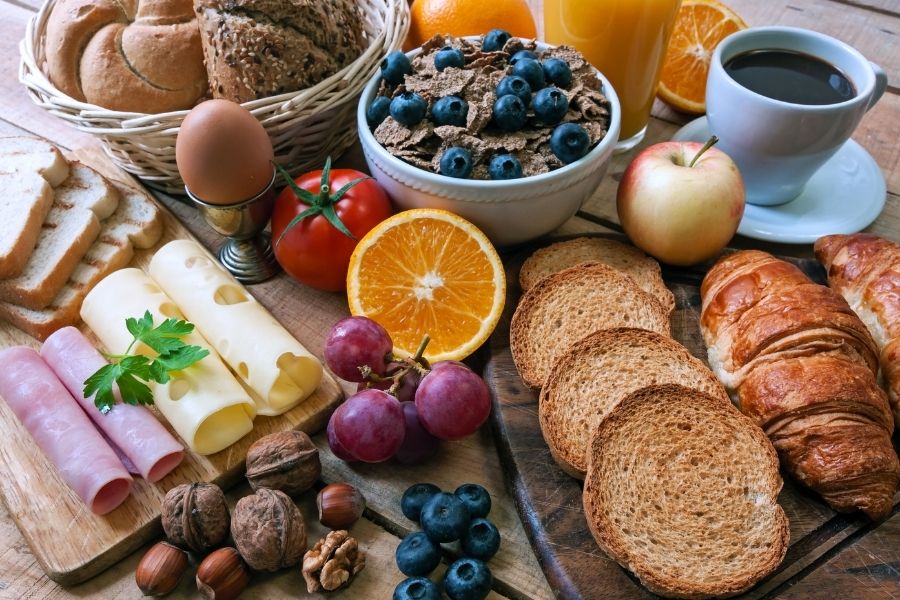 Continental breakfast is the lightest

This breakfast type is the lightest, so if you’re looking for a big breakfast, it might not be what you’re after. Europeans usually have a small breakfast, so the continental breakfast reflects this. You can pile your plate with more items, but it will not be the same as cooked eggs and ham with pancakes on the side.

The most probable reason for this is Medieval Europe, when breakfast was considered a sign of gluttony or a sign of a poor man working the field (needed extra energy). Nobles had none of that, so they never had breakfast. This was around the 15th century, you understand. So even when breakfast became more common, it was always small. Partly due to tradition, and partly due to people simply taking it as it is: a small meal.

Continental breakfast is easier to serve

An important note on this breakfast type: it’s incredibly easy to make and serve. You need no one in the kitchen, aside from a couple of staff members who can operate an oven (to bake pre-made croissants).

The dairy and deli meats are often pre-packaged, or they are cut with an electric blade. So are the vegetables. The drinks can sit in the fridge until they need to be brought out. And the espresso machine can be wheeled out so the guests can serve themselves.

It’s a very convenient, easy to pack and easy to unpack kind of deal. And, it’s cheap compared to English or American breakfasts that need to be kept warm and topped off by kitchen staff. A continental breakfast needs one staff member to check on the dining room form time to time, to see if everything’s alright. Maybe two people if the room is very large.

What is English breakfast ?

An English breakfast is wholly different from a continental. It consists of fried eggs, sausages, beans, roast tomato, bacon or ham, black pudding, toast, and roast mushrooms. The usual drink is a mug of strong, black tea, but you can also get black coffee instead, or juice. 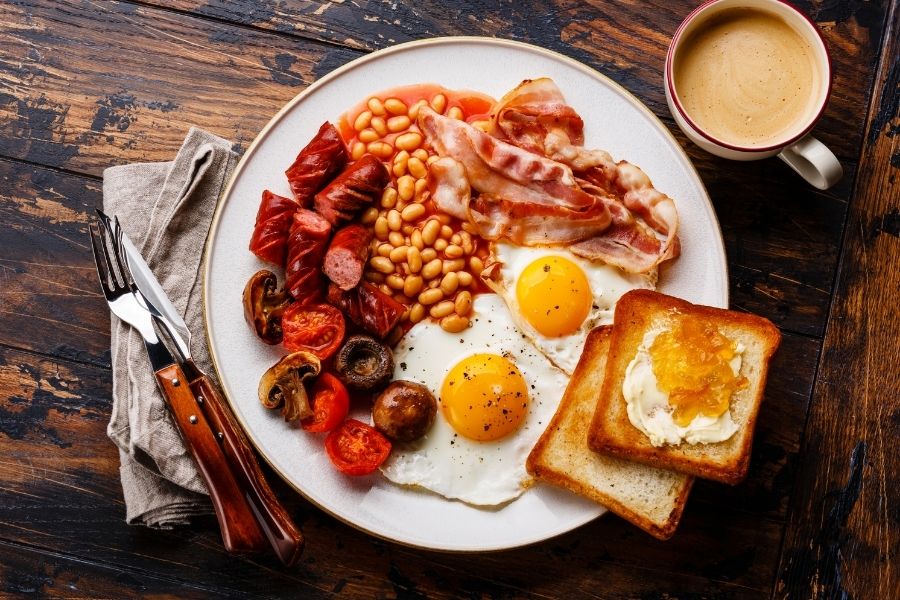 Sweets aren’t usually part of an English breakfast, but they can certainly be ordered from the kitchen as an extra.

Some items may be missing from some establishments, such as the black pudding or the sausages, or maybe they have tomatoes but no mushrooms, ad maybe they’ve added cheese.

The mainstay items are: eggs, beans, sausage. Anything else varies wildly from establishment to establishment.

English breakfast is also known as a full breakfast

You may also find English breakfast written down as ‘full breakfast’ or ‘full English’. They essentially mean the same thing, and have the same style, with one important note. It is a big plate with as many of the above food items as possible, in line with the ‘full’ part.

If you’re looking for a big, hearty, filling breakfast this is a good option. You may or may not like the beans and the sausages, depending on your palate. The beans are usually served in a sweet tomato or sweet chili sauce, and the sausages are Cumberland sausages. If you’re not familiar with them, they’re made of coarsely ground pork, pepper, thyme, sage, nutmeg, and cayenne.

You’ll find English breakfast sometimes served in most of Europe, alongside continental breakfast. The most common places to find it are former British colonies, such as Malta and Cyprus.

You will also find it in countries that have a lot of British tourists, which are usually the Mediterranean countries.

Read Also: Why Are My Pancakes Dry ?

What is American breakfast ?

An American breakfast is a little harder to pin down into a single definition like the English. It usually has eggs, some form of meat like sausages or ham or bacon, and toast on the side. Pancakes are a common feature, but as a side or dessert. Cereal can also be provided. 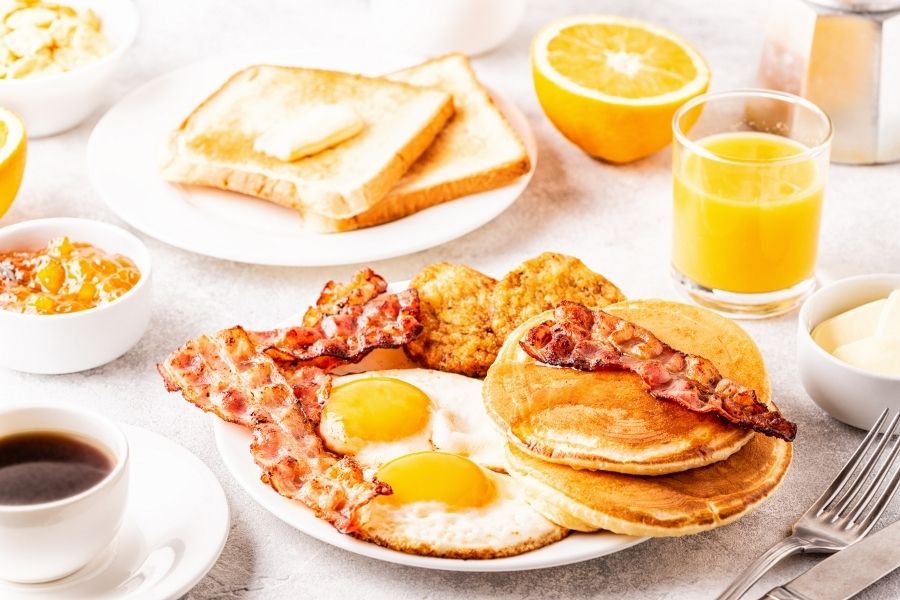 The exact way the eggs are made differs. Most a fried eggs or sunny side up, though you can also find them scrambled or as an omelette. Drinks are usually coffee (free refill), juice, or milk.

American and English are both filling breakfasts and they will definitely last you till lunch, maybe more. The downside is that unless you’re in North America or in a place that gets American tourists often, you’ll have a hard time finding it on a menu.

And that’s about it when it comes to the different breakfast types you can find at a hotel. Most of the time, it will be a continental breakfast, and breakfast at most hotels is free.