Gooseberries and currants, two very different yet oddly similar fruits. What are they, and how can they be used ? Well today we’re going to take a closer look at them, and tell you how to tell them apart. Not only the fruits but the bushes too !

If you live in a colder climate then you may have access to both of them, so it’s important to understand them both. 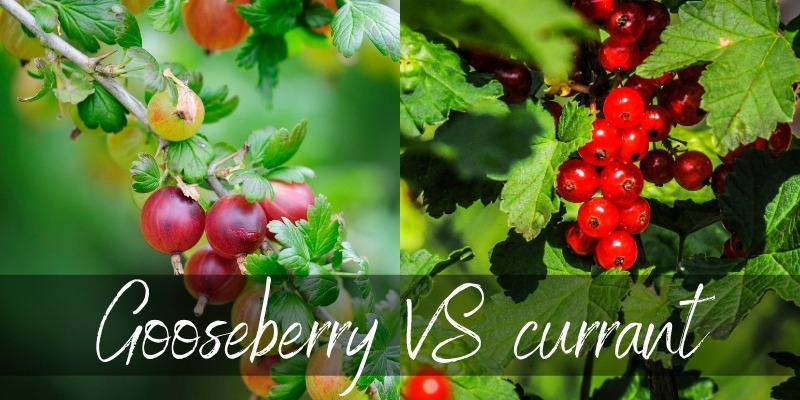 The biggest difference between currants and gooseberries is their thorns and colors. Gooseberry bushes have thorns, while currants don’t have thorns.

Currants come in bright red, black, white, and beige while gooseberries are usually light green or light pink, with white stripes like a watermelon.

Where more currants are small, only a bit bigger than a peppercorn, gooseberries can be as large as grapes. There are a few other differences between these two fruits, but there are also similarities. We’ll walk you through each difference in detail, and then discuss their similar points as well.

Read also: How To Store Gooseberries So They Last Longer

Gooseberries have thorns on their twigs

The two bushes will look very similar, but you can look at the thorns and leaves. On gooseberry bushes the leaves will look a lot like parsley, but bunched tighter. Currant leaves are pointy, more like vine leaves. 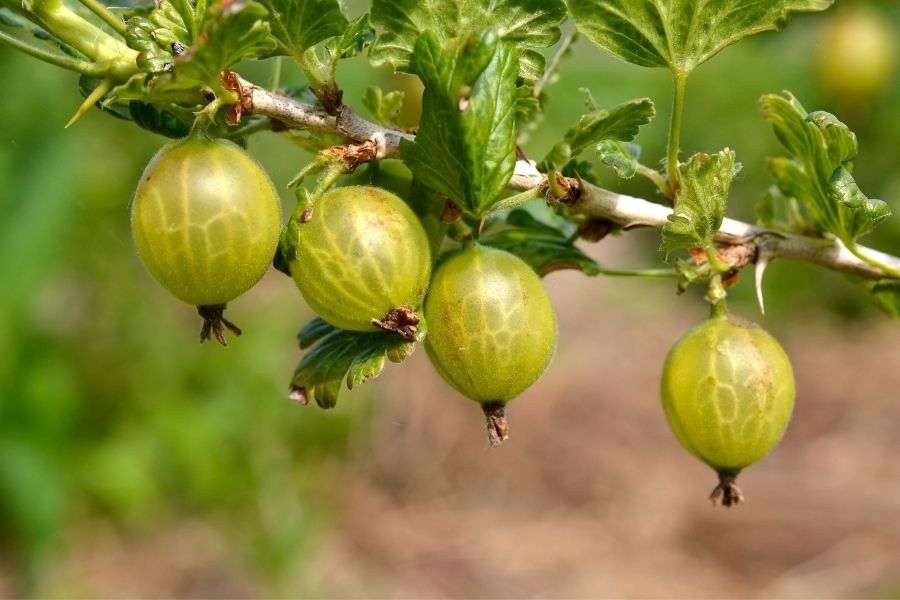 There are no thorns on currant bushes, no matter the type or color.

Gooseberry bushes have thorns all over the twigs. They’re relatively short and skinny, more like a cactus needle than a rose thorn. There is no place on a gooseberry bush where you can grab and not find some thorns or needles.

And finally, you can look at the way the fruits grow on the bush. Gooseberries grow along the twigs and branches, in two rows (like pairs). Currants hang from the branches, in a zig-zag pattern.

If nothing else, use these guidelines to figure out what you’ve just found if you’re on a hike in a very cold climate.

Currants are tart, and are often cooked

Historically currants have been prized for their tart flavor, great color, and slightly sweet flavor. They’re at their best when cooked, like in a sauce, jam, jelly, or something similar. Currants are often too tart to be eaten raw, but they look beautiful.

Even after currents ripe on the vine and their color has come through, they can still sweeten if you leave them until the end of the season.

That being said, you can also cook gooseberries. They provide a tart and fruity flavor too, just maybe not as much as currants.

The two fruits even look very different. Currants are simple to identify. They have a uniform color all over the outside, with a black dot on the bottom.

You’ll notice that currants are black, deep red, beige, or white. The black and red currants are the most common, and the ones the most flavorful. And because of that strong color, their juice acts as a great coloring agent for anything you like. It’s right up there with cherries and beets in terms of bright pink-red colors.

Gooseberries are less colorful, and much paler. They come in a couple of colors, like green, pink, and sometimes yellow. All of them have stripes going down the sides, much like a watermelon. They’re also a bit transparent, like a grape.

Currants are usually smaller than gooseberries

Another thing you may notice about currants is their small size, especially compared to gooseberries. A currant is just a little bit bigger than a peppercorn, and you need a lot of them.

Gooseberries are much larger, two or three times larger than a currant. Of course, it varies from crop to crop and year to year. You can find really big currants and really small gooseberries, depending on how well the plants have grown. 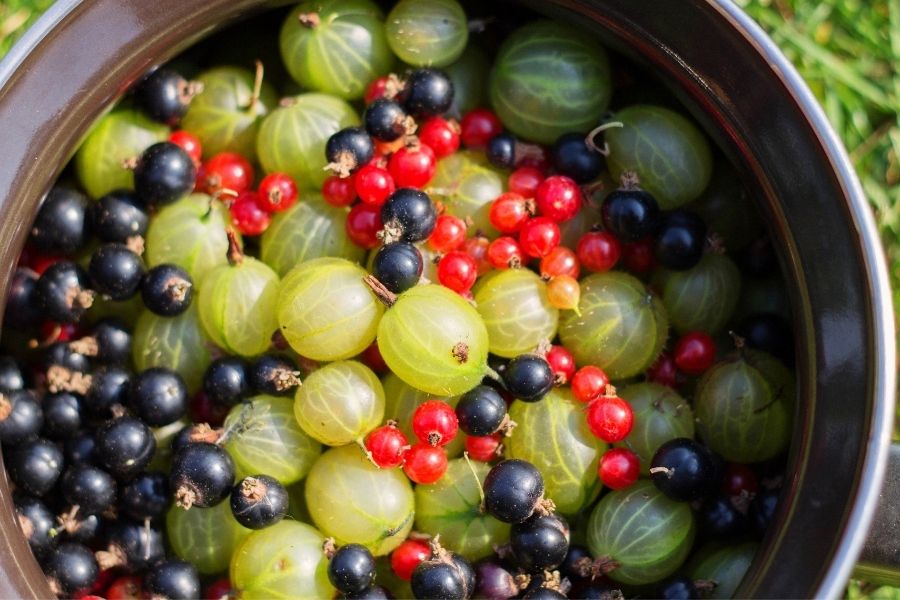 Similarities between gooseberries and currants

Those were the main differences between gooseberries and currants, but what about their similarities ? They’re form the same genus (Ribes), so they have to have a few things in common, right ?

Well, it turns out they do have some things in common. So let’s see what those things are, and if that can change our opinion on them.

Both live in northern climates

Gooseberries and currants love colder climates, which makes them suitable for most of North America if you want to grow your own. That being said, they can be grown in temperate and warm climates, but they need to be carefully monitored.

Both are great as permaculture species

As they’re useful and take up soil to put their roots, both gooseberries and currants can be planted strategically in places where you don’t want weeds. There are perennial plants, and they will come back for years and years.

Why are gooseberries illegal ?

Gooseberries and currants used to be illegal in America because they were susceptible to the white pine rust. This is a disease that does not affect the fruits as much but they can be carriers. As the name implies, it can decimate acres of white pine. Back in the 1900, white pine was a very important timber in American homes and buildings.

So a law was passed, prohibiting the growth of currants or gooseberries. The ban was lifted in 1966, but some folks still avoid these bushes.

They can be invasive if not pruned regularly. They spread quite easily and can end up taking more of your garden than you would like. If you decide to plant your own gooseberries, make sure to cut it back each year.

Can you substitute gooseberries for currants ?

Yes, gooseberries and currants can be substitutes for one another, with varying results. This is because currants are tart, like gooseberries, but they’re much more colorful.

Gooseberries have a bit of a mellow flavor, compared to currants. Still, if you’re in a pinch you can swap the two as needed. Just remember that currants are smaller, so you may need more than you initially thought.