When the cold season rolls around everyone starts thinking of spices, golden leaves, pumpkins, pumpkin pies, Halloween, and all the cinnamon in the world. Pumpkin pie seems to be more and more popular, even outside of America in countries where it wasn’t usually a thing.

So today we’re going to pay tribute to the main ingredient in a pumpkin pie: the pumpkin. If you don’t want to go for a canned pumpkin pie filling, you have two options. You can either get canned pumpkin, or roast some fresh pumpkin at home.

Which do you choose ? This is a classic debate, and as pumpkin pie becomes a global thing, more and more people will wonder if it’s better to just get canned pumpkin.

Let’s take a look at canned pumpkin and fresh pumpkin. What the main differences are, if one if just so much better than the other, and which one produces a better pie. 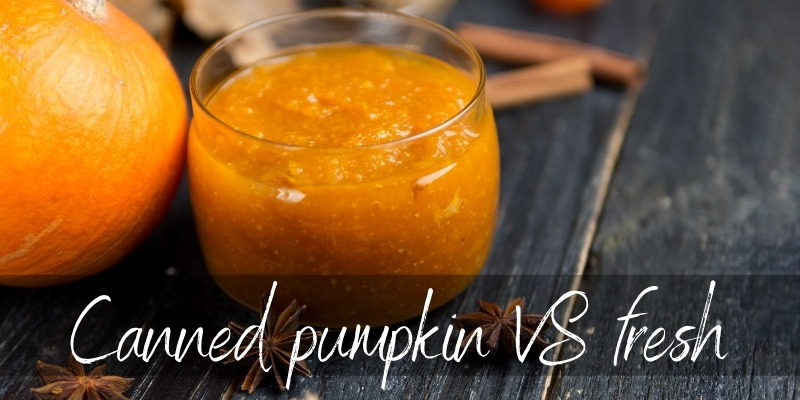 There’s a big difference in flavor. Fresh pumpkin is not spiced, and you’re in control of how much spice and sugar you add. Canned pumpkin usually comes with cinnamon, nutmeg, cloves, and sugar already added.

In short, canned pumpkin is much more convenient, and for a busy home cook it might be the fastest choice. Most everyone knows what canned pumpkin tastes like, so the flavor of your pumpkin pie will be consistent throughout the years.

Even so, for some the appeal of making something from scratch may be too too much to pass up. Before we go on though, let’s take a look at what canned pumpkin is. Then we’ll get to the comparisons.

What is canned pumpkin ?

Canned pumpkin pre-cooked pumpkin, that ahs already been pureed and then canned. The pumpkins used are not always the orange pumpkins used for jack-o-lanterns, because they are less sweet and have less flesh. They’re either a subtype that grows smaller and thicker, or butternut squash.

The pumpkin can be either roasted or steamed, and it will always be run through a blender. This ensures no pumpkin is lost during production, and the consistency is the same throughout each batch.

Now let’s take a look at the main differences between canned and fresh pumpkin. This way you’ll be able to choose what’s best for you, and your perfect pie.

Canned pumpkin is consistent across all batches

Canned pumpkin has the advantage of being the exact same across all batches, because it’s mass-made. There are regulations and parameters the producer set in place for the products, so the final canned version has to be the exact same, over and over again. Product consistency. It also means that when a recipe calls for a specific amount of pumpkin, it’s usually a full can.

This means that if you’ve always used canned, then switching to fresh may throw off your recipe a little. Fresh pumpkin is variable, since it depends a lot on the sugar and moisture content within each pumpkin.

A fresh pumpkin will be at times more watery, or less sweet, or much sweeter, or yield less flesh than you expected. If you’re okay with that then fresh pumpkin can be an amazing boost of self-confidence. You made that yourself !

Read also: Does Pumpkin Pie Need To Be Refrigerated ?

When you roast your own fresh pumpkin you can get varying results. This means that real, raw pumpkin is stringy, and retains some of that stringiness even after roasting or steaming. 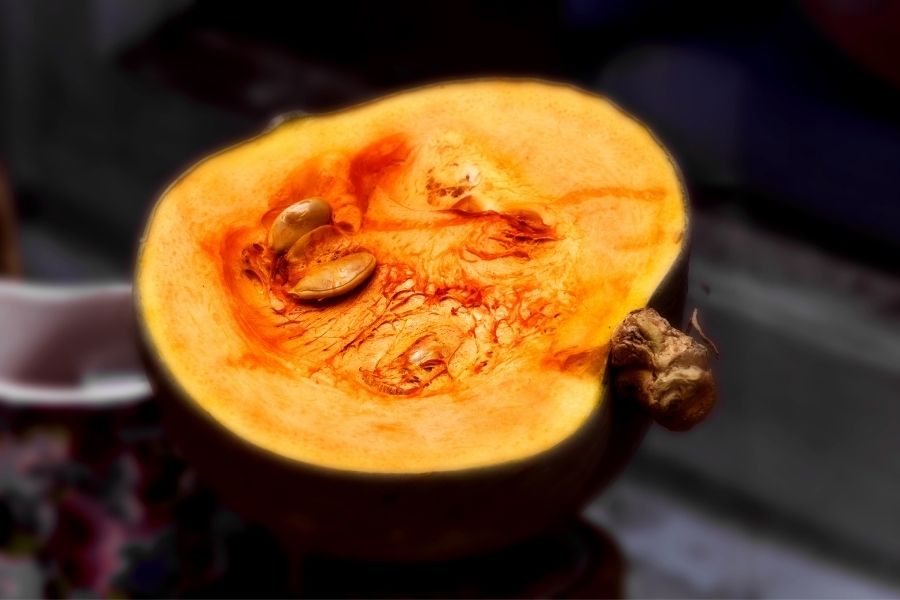 You can leave it as-is, because some people like it. It ahs more texture, and can provide a really nice change from the usual pie. You can also blend the living daylights out of it until it’s as smooth as you like it.

Even so, a couple of stray strings may still be around. It’s up tp you if you like that or not.

Canned pumpkin comes pre-blended, meaning it will always be silky smooth and won’t require you to much work aside from adding milk and eggs.

Another point for convenience, canned pumpkin is pre-spiced and pre-sweetened. So if you know you’re not the best with spices or don’t want to spend time in the kitchen, this is an easy shortcut.

Since it’s pre-spiced it means it’s always been the same. Everyone who’s ever had canned pumpkin knows what they expect when they bite into a pumpkin pie.

Fresh pumpkin is unseasoned and needs sugar. This can be a good or a bad thing, depending on your preferences, time to spare, and what your family likes. It can be a good thing because you’re completely in charge of the flavor.

Want to swap cloves for star anise ? Do your thing !

And if you want to skip the sugar and just add some maple syrup, who’s gonna stop you ? Add some grated ginger while you’re at it to lift the flavor a little.

For some folks that level of freedom can be terrifying, and the canned version works best. Clean cut, you know what you’re getting, no fuss.

Fresh pumpkin can be a nice family project

Fresh pumpkin is a project of its own, as you have to provide all the spices and sugar it needs. Scary ? Maybe. Risky ? Definitely, you could mess up the whole pie. Totally worth trying ? Oh yes, nothing beats a fresh roasted pumpkin ! 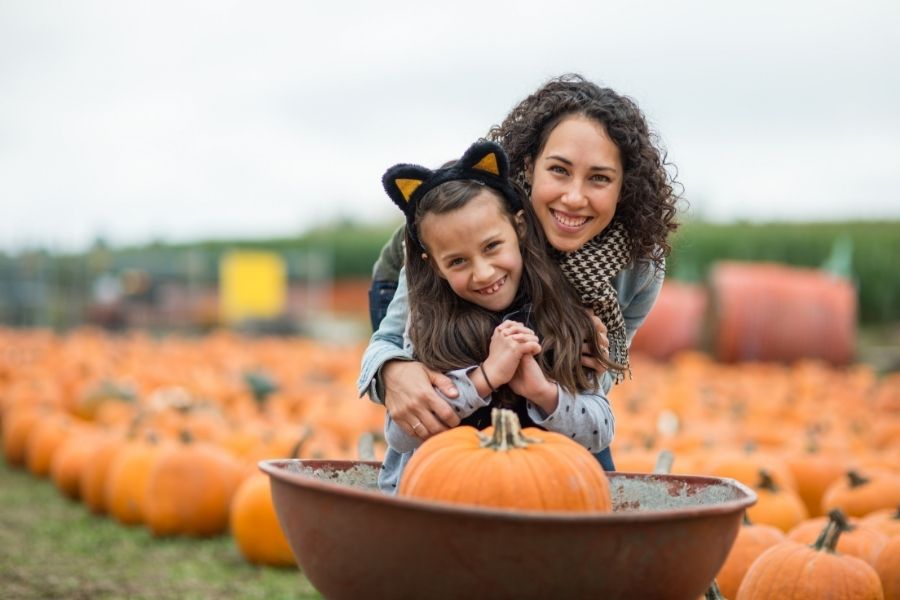 We’re a bit partial to fresh pumpkin, simply because it’s part of the charm of a pumpkin pie, for us. Having a nice project to work on for a few hours, with the smell of sweet, roast pumpkin in the house just makes fall that much more festive !

If you’ve got kids and want to keep them busy you can let them help you spoon out the roast pumpkin (be sure it’s cooled !!!). It’s something to work on together, and you can give them little tasks. One can mash the pumpkin with a fork, the other adds spices.

Canned pumpkin is much faster to work with, so you can view it as a bit of a life saver if you have very young kids that need supervising. Mixing the pie filling and popping it in the oven will be quick, and you can keep an eye on the kids if the situation calls for it.

Is canned pumpkin as good as fresh ?

In terms of convenience and texture, canned pumpkin can be better than fresh because people have come to expect it. Is it objectively better ? We’re not sure, it’s entirely up to each person.

We love fresh pumpkin and don’t mind spending the time to work on it. The texture is a big plus for us. Some may agree, some may disagree.

What we will say is that canned pumpkin is incredibly convenient. There’s very little you have to do to it after you take it out .

Can you substitute canned pumpkin for fresh ?

Yes, canned pumpkin can be substituted for fresh very easily. You have to keep in mind that fresh pumpkin is a little stringy, so if you want a silky texture blend it very well.

There’s also more moisture in fresh pumpkin, which you may have to drain. It’s not necessary, but some people prefer a drier mixture than others. And depending on what you’re making, the extra moisture can help or hinder.

For example if you’re making pumpkin bread the extra moisture will definitely help keep it… uh, moist. If you’re aiming for a flaky crust pie, then extra moisture won’t help at all.

In short, yes, you can substitute canned pumpkin for fresh and vice versa. Just remember to look add spices if there are none.

Is pumpkin puree the same as canned pumpkin ?

So pumpkin puree is canned pumpkin, which can be spiced or not. If it’s spiced and sweetened, it’s usually named pumpkin pie filling. If it’s plain, it’s just pumpkin puree. Be sure to check the ingredient list to see if it has any sugar or spices.

So which is better for pumpkin pie ?

For a quick, no-fuss pie canned pumpkin is the clear winner. Consistent results, most recipes use canned pumpkin, and it comes out the same every time. Quick, reliable, familiar.

For an enthusiastic home cook, fresh pumpkin can be a better choice. You have complete control over the flavor, the texture, and it provides some variation from one pie to another.

It really is up to you, how much time you’ve got on your hands, and how much you want to mess around in the kitchen. If you’re up for a project then we really recommend fresh pumpkin.

But if you’re looking for a quick and easy pumpkin pie, go for canned. Especially if it’s your first batch, or you’re not feeling very confident. Canned pumpkin provides less variables to track, it’s very easy to work with.

Whichever pumpkin you choose, know that it’s always going to turn out good. All your hard work and effort will show, and the pie will definitely be good.