Rhubarb is a very versatile veggie, but most folks use it in sweet dishes. So when you’re out and about, looking for some fresh rhubarb, you’ll want to know how to pick the best stalks possible.

There are a few signs you can look for when buying rhubarb, and we’re going to walk you through them. Keep in mind that not all rhubarb is the same, especially when it comes to color. 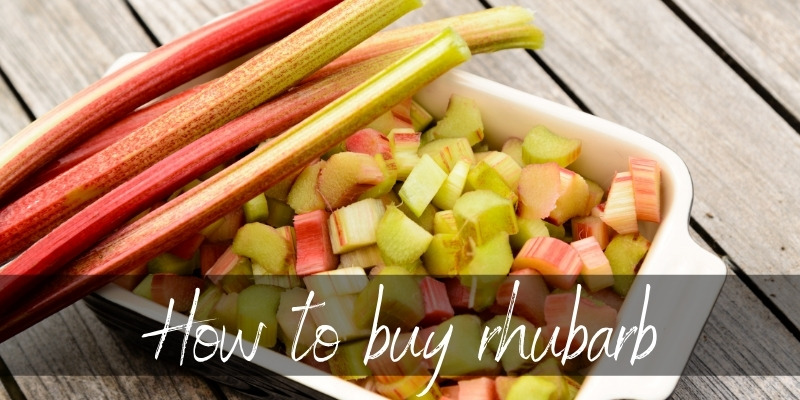 Table Of Content show
1 How to buy rhubarb
1.1 How to tell if rhubarb is ripe
2 Rhubarb types to look for
2.1 Does color matter ?
3 When is rhubarb in season ?
4 Signs your rhubarb is off
5 How to store fresh rhubarb
5.1 Rhubarb on the counter
5.2 Rhubarb in fridge
5.3 Frozen rhubarb
5.4 Canned rhubarb
5.5 Rhubarb jam

How to buy rhubarb

When buying rhubarb look for shiny, plump stalks. They shouldn’t be overly large, as those are very fibrous. Ripe rhubarb is usually red, or at least has a red tint to its stalks.

Be sure to check for any leaves. Most of the time rhubarb is sold without leaves, but if you see any remember to cut them off at home. The leaves are poisonous (oxalic acid) and should never be eaten.

Depending on what you’re planning on doing with the rhubarb, a thick or thin stalk may be better. Thick stalks (red or green) are better suited to long cooking times, to soften. Thinner stalks are more tender and will cook easier.

How to tell if rhubarb is ripe

There is rhubarb, and then there’s rhubarb. Most of the time you will see ripe rhubarb for sale, though sometimes you can find underripe stalks for sale. A ripe rhubarb stalk should:

Each rhubarb cultivar is a little different, and is picked differently. We’ll get to explaining them in a bit, but for now know that the harvesting season is later spring-early summer.

Some rhubarb is thin and somewhat short, even when ripe. Some types are very long and thick and will appear huge on the shelves. But all of them will have a reddish tine, blush, or be completely red.

Rhubarb types to look for

There are a few types of rhubarb you can buy. Which you find on the shelves is important, because if you’re only used to one kind then another one might throw you off. There are dozens of types, and we’ll only go through the most commonly sold ones.

Cherry Red – a medium-sized stalk, with the brighter red color towards the end of the season. Very sweet and tender.

Glaskin’s Perpetual – long, red stalks. Can be found later in the season, but also in early season.

Grandad’s Favorite – early season rhubarb, with a fair amount of red on the stalk.

Victoria – not stringy, large and plump stalks with good flavor. One of the oldest rhubarb types in commercial use.

Keep in mind that there are open-air rhubarb crops, and there are hothouse rhubarb crops. The hothouse ones will usually be sweeter, more tender, bright red, and more expensive than regular rhubarb.

Yes and no. yes, the color matters as it’s a sign that the plant has fully matured and its stalks are done developing sugars.  But also no, because not all cultivars are the same.

Some cultivars, like the Prince Albert or Grandad’s Favorite have a red-to-green variation on the stem, even when fully ripe. They’re not the sweetest but supermarkets rarely ever display the variety name.

So if you’re staring down a few stalks that are not uniformly red, you often won’t know if it’s the variety or an early harvest. Which is why it’s your best bet to sweeten the rhubarb anyway. And yes, you can eat the green part of the stem as well.

Just be sure to remove any leafy part that you notice. If this means cutting into the red, do so. 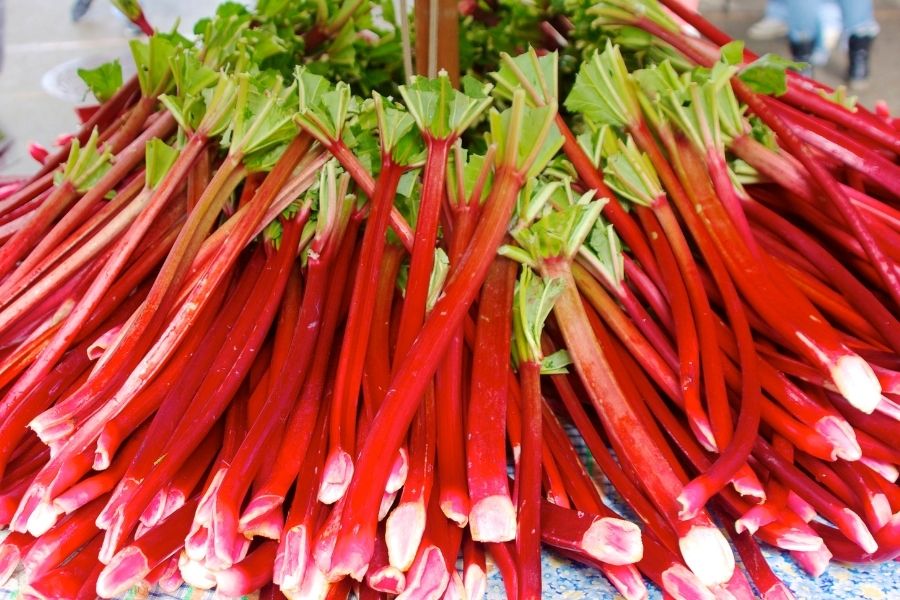 When is rhubarb in season ?

Okay, we know all that but when is rhubarb actually in season ? It’s from mid-spring to mid-summer, stopping somewhere in the first half of July.

This is because as summer goes on the stalks become thicker, but in a fibrous, woody way that starts to remove flavor. Rhubarb isn’t a heat-loving plant by any chance. It loves colder areas. Once high heat rolls around, it needs to replenish its leaves to store energy for the winder, so it can regrow in spring.

Rhubarb isn’t harvested in its first two, maybe three years. This is because the plant needs to establish itself, and also the stalks of young rhubarb are simply too thin and wispy to be of any use.

You might have noticed some rhubarb stalks appear as early as March. Those are hothouse rhubarb stalks, and they’re harvested earlier than open-air crops. There are also cultivars that can be harvested pretty early or late in the year, making for a mid-spring to mid-summer overall season.

Signs your rhubarb is off

You have to be careful when selecting the rhubarb stalks, as they can be damaged. Most of the time they’re fine, and this is a hardy plant and stalk, much like celery.

On the shelves most rhubarb should be firm and plumb. If you notice any stalks that are soft or wilting, don’t buy them. If they’re staring to mold at one end it’s a good ideas to steer clear of them as well.

In short any discoloration, weird smell, or change in texture is a bad sign. A good, healthy rhubarb stalk should be shiny, plump, and a more or less bright shade of red.

How to store fresh rhubarb

When you get your hands on fresh, plump rhubarb you’re going to want to store it properly. It’s a nice summer treat, and you may want to enjoy it in the cold season too !

So let’s take a look at how to store rhubarb for short and long term.

Rhubarb on the counter

On the counter is where most folks will probably keep veggies or fruits that they use immediately. This means your rhubarb won’t survive for more than a couple of days at room-temp, before starting to go limp.

Make sure your kitchen isn’t too hot, otherwise the rhubarb will soften by the next day. You can leave it on the counter as-is.

We really recommend you keep rhubarb in the fridge, whether you mean to use it immediately or 5 days later. Wrap the rhubarb in plastic, or use a plastic bag.

This will keep the rhubarb crisp for up to a week, and it’s probably a good idea to store it in the vegetable crisper.

You can freeze rhubarb, if you need it for months later and know you won’t be able to find them in stores. Be sure to wash and ry teh stalks, and then cut them into small pieces. You can freeze them in a single layer, and then put all of them in the same container and keep in the freezer.

Or you can freeze them all together, and portion into smaller bags (like half a pound). Either way, frozen rhubarb can last up to 6 months if kept continuously frozen.

So if you know you get rhubarb pie cravings in the middle of winter, you can easily freeze some in June. Just remember that thawed rhubarb will be soft and cook much easier.

You can can pretty much anything, including rhubarb. We recommend you cut the stalks into small pieces again, and use sterilized jars. Boil sugar syrup (any sweetness level you like) and pour directly into the rhubarb-filled jars.

Leave about an inch of space at the top, but make sure the rhubarb is completely submerged. Close lid but not too tight. The heat will make a seal and keep the lid on tight.

These can last up to 12 months in a cool pantry.

On the same note, why stop at canning ? If you know you often make rhubarb pie why not make some jam and make your pie life easier ? Rhubarb doesn’t have as much pectin as fruits, so be sure to pick up some to add to the jam. 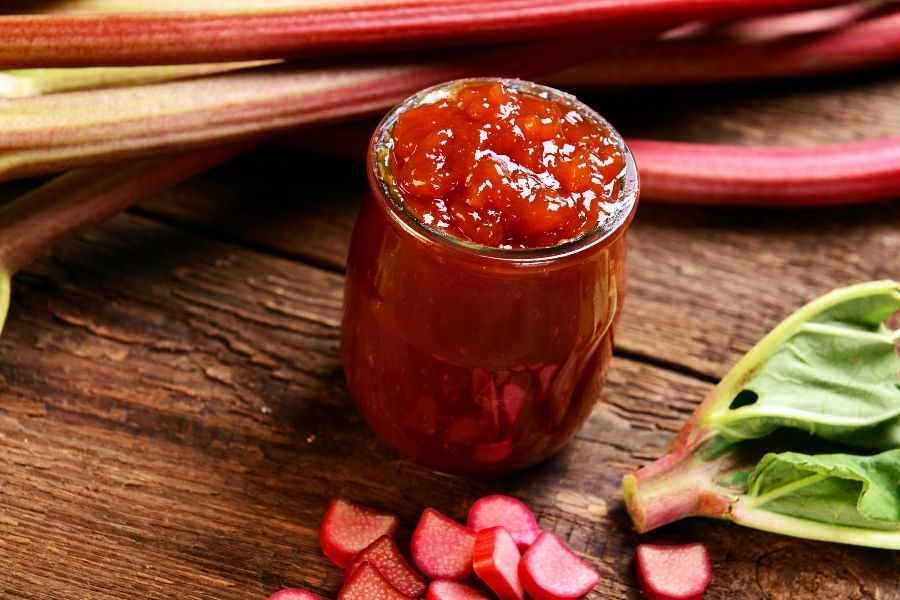 Boil chopped rhubarb with sugar in a 1 to 1 ratio. If you think it needs water only add the smallest splash. Add pectin, and portion into sterilized jars.

These can last up to 24 months in a cool pantry, even longer in a fridge.

And you’re done ! You know how to pick out eh best rhubarb when shopping, you know how to store it, and you know the signs of a bad rhubarb. Always remember to cut off the leafy parts !