Have you ever had sushi ? If you haven’t then you may just know sushi is raw fish, and maybe that put you off. But is sushi just raw fish ? Is anything in sushi actually raw ? Is sushi a raw dish or is it cooked ?

We’re here to explain that, and let you know that sushi isn’t exactly for everyone. We recommend trying it at least once, preferably from a good sushi restaurant to make sure you get the real thing. But first, let’s explain what sushi is and whether it’s raw or not. 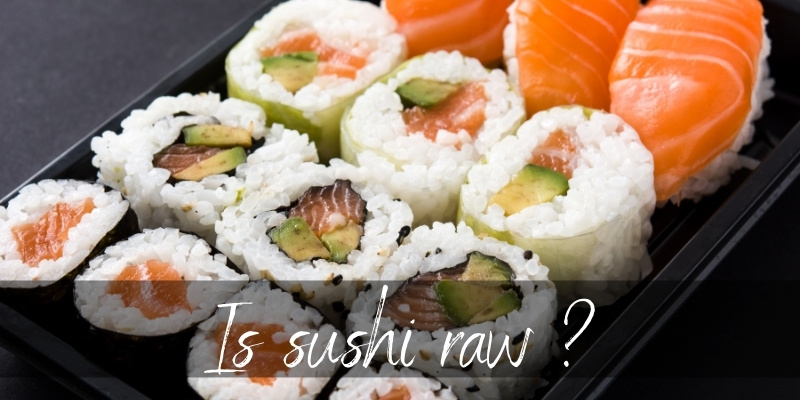 Table Of Content show
1 Is sushi raw ?
1.1 Some sushi toppings or fillings can be raw
1.2 Is California roll raw ?
1.3 You can also find veggie sushi
2 Why the fish is usually raw in sushi
3 How is sushi different from sashimi ?
3.1 Is it ok to eat raw fish ?

Sushi is a mix of cooked and raw ingredients, though you can easily find sushi that has no raw ingredients. In truth sushi is any roll that has vinegared rice as its base, and it may contain raw or cooked meats or vegetables or both.

Sushi has become a general term in the West, ranging from the raw sashimi to the cooked sushi bowl. In reality sushi is any dish that has seasoned rice as its base.

Some sushi toppings or fillings can be raw

Since sushi has so many different styles, it also has many different toppings and fillings. For example let’s look at nigiri, a type of sushi. It’s the little, elongated balls of rice with a single piece of thin salmon on top. They may have a sneaky dab of wasabi under that salmon sometimes.

The salmon on nigiri may be raw, or it may be smoked salmon (cured). The emphasis here is on the quality of the meat and how well the chef can select the fish and prepare it for you.

Another sushi type, the maki, is probably the most common. It’s the one with nori (seaweed sheet) on the outside. It can have different fillings, such as raw salmon and avocado, or fried shrimp and bamboo shoots. You can find maki with one, two, or even three fillings, and they may be raw or cooked or cured.

California roll is a type of inside-out roll, or uramaki. It’s not raw, since the only meat in it is crab meat, and that is cooked. The only ‘raw’ ingredients are the cucumber and avocado.

A Philadelphia roll may be raw, as it has salmon, cream cheese (originally Philadelphia cheese but you can use whichever), and cucumber. Now, the salmon really depends on the chef making the sushi.

As with most commercial sushi, if it’s pre-made they won’t really want to take any chances with raw fish packaged for days or weeks. So, they will almost always use smoked salmon. If you’re at a restaurant and the chef is preparing the sushi right in front of you, it’s going to be raw salmon.

You can also find veggie sushi

If the idea of raw fish is off-putting to you, try veggie sushi. There are vegan and vegetarian sushi types, such as the kappa maki, which is just cucumber, rice, and nori. Or you can find sweet potato and avocado maki, or a mix of smoked tofu, cream cheese and cucumber. 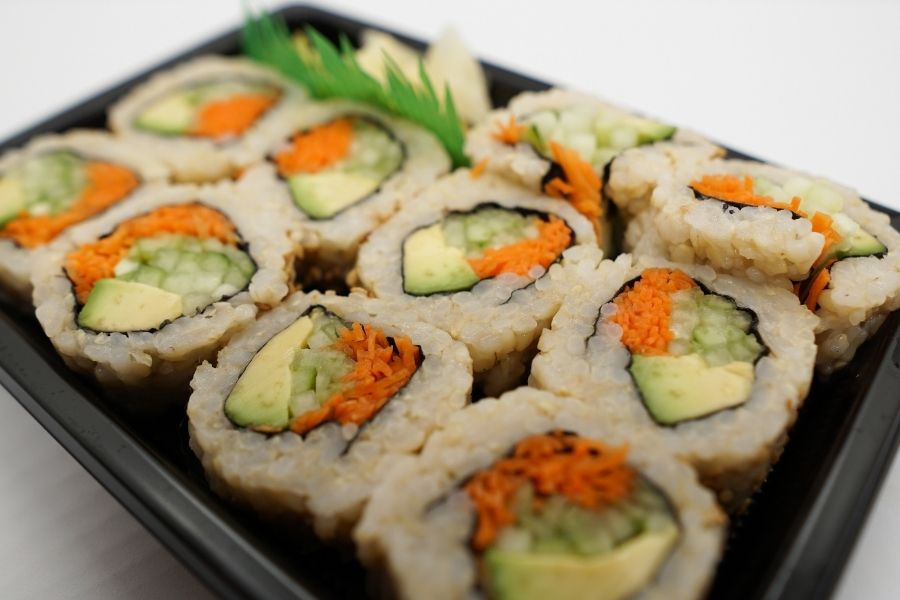 There are so many combinations to choose from, if you want to get started on sushi. Sushi is a lot like an omelet or pizza: you can use whatever you have on hand or whatever you like. The only condition is that they should go well with vinegared rice, and possibly soy sauce if you want to use it as a dip.

If you buy a pack of pre-made sushi rolls you’ll notice that it’s always a mix of veggie, meat, and veggie and meat. The veggie-only ones are mostly meant to cleanse the palate between fish types. You can sue pickled ginger for that as well, but the idea is to also sate your hunger.

Why the fish is usually raw in sushi

Alright, let’s talk about why sushi has raw fish in the first place. It all has to do with the actual origin of a sushi roll. Initially no nori sheet was used, and this was way back in the Bronze Age.

The exact country of origin of sushi is unknown, but the purpose of it was well known. It was made of fermented rice and fresh fish. It was supposed to act as a sort of insulation around the fish, helping it keep fresh and edible for longer, as in months.

Fermented rice wasn’t eaten, it was discarded and only the fish meat was used. This was especially useful in winter when fresh meat was very difficult to find, and the main goal was surviving.

Over time the fermented rice was swapped for vinegared rice. The vinegar serves the same purpose as in pickles, preserving the rice and the meat inside. This is why the most traditional version, the maki, uses meat inside the roll, surrounded by vinegared rice.

Once it was easier to find food and there wasn’t such a need to store large amounts for fear it would go off, the sushi came closer to what we know today.

Still the tradition of using fresh fish turned into an actual art and science. The sushi chefs really need to know their fish, understand the quality of the meat. You may have noticed that much of Japanese cuisine uses simple ingredients and relies more on the finer points of each flavor than a mix of several strong ones.

The same is true for sushi. It’s a simple dish but it’s elegant and impressive by how good the ingredients are and how well they go together. For a good sushi roll you need barely any soy sauce.

How is sushi different from sashimi ?

You might be wondering where sashimi fits into all of this. Well sashimi is simply raw meat, and it’s kind of an upgrade of sushi. A good sashimi platter is made with perfectly cut meat, and nothing to distract you from the high quality meat that’s sliced for the best texture, according to fish type and its age.

You can find sashimi made from other meats like beef and chicken or squid, and you may even find some vegetables. But almost all the time the meat is raw, with only a few of them being lightly seared, such as octopus.

Sashimi is a sushi chef’s crowning achievement. You need years of training to understand how and why the way you cut each piece of meat influences the taste. For example with beef, when you slice it thinly and across the grain you get shorter fibers and it’s much easier to chew. The same applies to fish, and each chef know what to do for each fish.

In a way yes, it’s okay to eat raw fish because a good sushi chef will choose his fish from reputable sources. Those sources should harvest their fish from unpolluted waters, or from parasite-free farms.

Of course there is always the threat of contracting a disease or parasite, such as Salmonella or tapeworm. Eggs and bacteria are usually destroyed through a deep freeze or through cooking, so if you want to be sure your sushi or sashimi is 100% safe made sure it’s been frozen before, or is cooked.

This may influence the overall flavor of the sushi, since it means you can’t go for raw rolls. Here’s what seafood is usually cooked in sushi, or examples of sushi that is not raw:

Of course each establishment may have their own version of sushi rolls that they name differently. The city-named rolls are always the same, so you can count on that. For example the Philadelphia roll is always cream cheese, cucumber, and salmon, but the salmon may be fresh or smoked.

If you’re unsure it’s best to ask the waiter or whomever is taking your order. On the whole though we wouldn’t be too worried about the raw fish in sushi. It’s generally such a well made food that it’d be a shame to pass it up.