Love the idea and smell of curry but aren’t sure you can handle the heat ? There are quite a few types of curry, and Japanese curry may just be easier to handle. Indian curry is the first curry to exist and is basically the mother of all curries in the world. But how and when did Japan get its curry ? And how is it any different from Indian curry ? Let’s take a look. 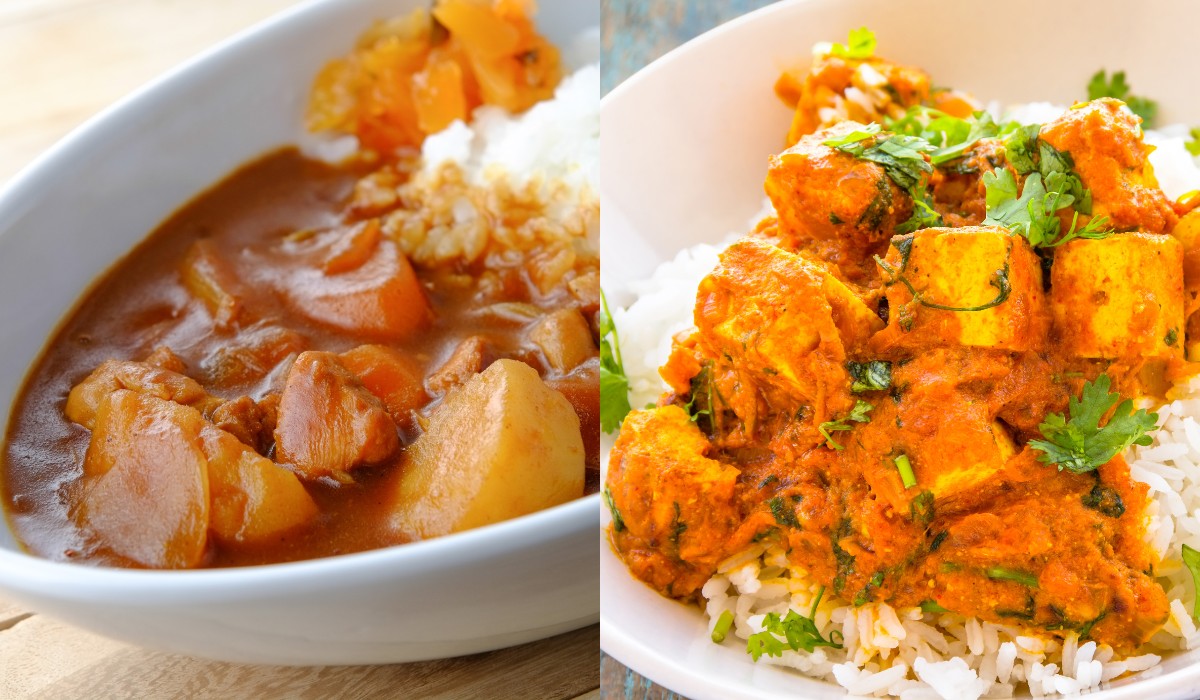 Japanese curry tends to be sweeter and less spicier than Indian curries, as it resembles more of a thick stew with a curry powder mix added to enhance the flavors. Indian curries tend to be very bold, and their spice mix varies greatly from region to region and family to family, and there is no general consensus as to what the base of a curry is. Japanese curry has a few key ingredients that are rarely skipped.

Of the two curry types, Japanese curry is the most approachable and beginner-friendly, while Indian curries have a complex spice blend that can be too much for newcomers. The heat level is vastly different. Japanese palate tends to prefer savory foods with lower spice/heat levels, while the Indian palate is far more used to bold flavors with a lot of heat. Let’s get to comparing these two beautiful curries in a lot more, delicious detail.

Indian curry tends to be spicier than Japanese curry

The heat level is really something we need to talk about. Not everyone can handle hot dishes, and curries definitely fall into that category. Now, each region in India makes their curry a little different, but overall they’re quite hot. For the average Westerner, it can be too hot half the time. This is because they use a lot more hot peppers, ginger, and cinnamon than other curries, and all three of these are hot.

Read also: The Difference Between Curry and Masala

Indian curry varies greatly by region and family, with some regions preferring some spices over others, resulting in some very different recipes and flavors. Most of the time the dominant notes in an Indian curry will be a mix of coriander, cumin, cloves, ginger, turmeric, in varying percentages. For example tikka masala is a type of curry that employs chicken (usually on skewers), tomato sauce, and a milder spice mix that brings flavor but not a lot of heat. 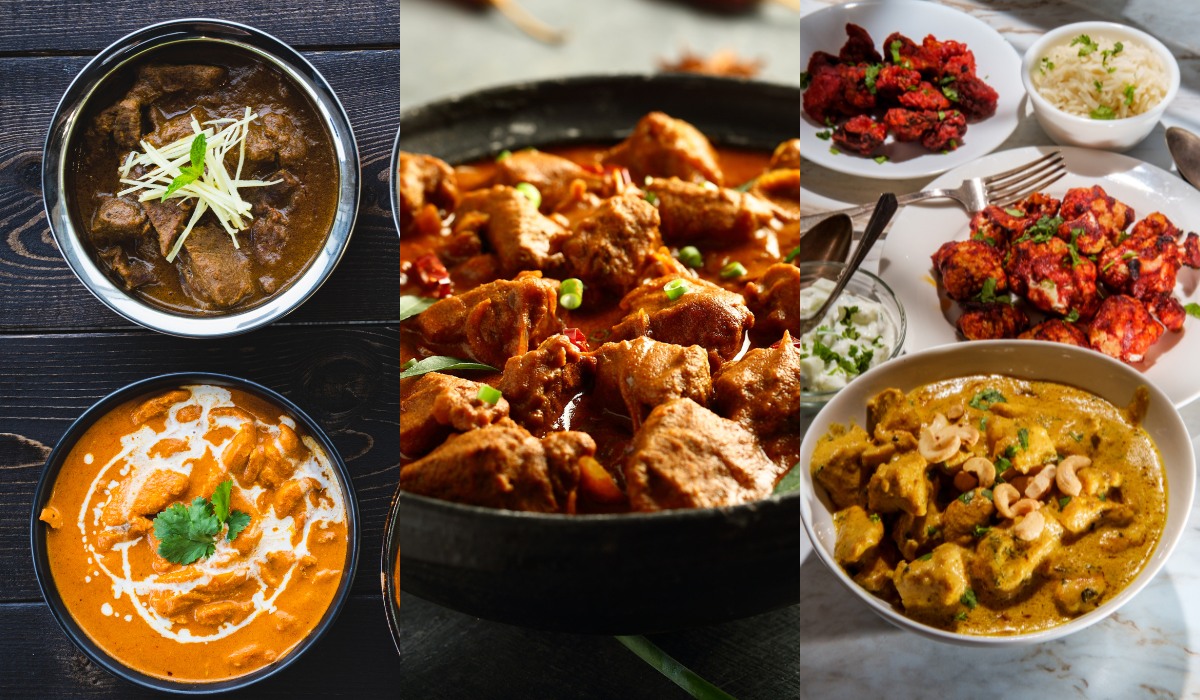 Korma curries are flavorful instead of hot, while vindaloos are the exact opposite – the hottest Indian curries with fewer spices, focusing more on the heat of the peppers. Rogan josh is another very hot curry that is colored exclusively by its hot red peppers, and uses only lamb meat and nothing else. There are many more curry versions, and each is a little different from the others.

Japanese curry also varies by family and region but the general consensus is that the flavors should be savory/umami, and then a little sweet. There is far less coriander, cumin, ginger, and turmeric than in Indian curries.  There are plenty of condiments in a Japanese curry mix, they just aren’t as overwhelming and don’t pack as much of a punch as a typical Indian curry. This doesn’t mean a Japanese curry doesn’t taste like a curry, it just means it’s milder and will be very recognizable in most parts of Japan.

As a continuation of the previous point, Indian curries vary greatly and this includes more than the spices. Some Indian curries require your to braise the meat, some require the meat be marinated in yogurt, while others have no meat at all. Some curries use one one type of meat, while others are a very specific mix of protein and legumes (like mutton and lentil in dhansak curry). The texture in an Indian curry also varies, with some curries turning out more soupy and some drier, like a very thick sauce or even a mildly hydrated dry rub.

Japanese curry has a few key ingredients and a specific texture. Typically it uses beef instead of any other meat, but chicken may also be used. There isn’t turmeric in this curry usually, so the golden color is more of a brown color, with honey, pears, apples, sometimes ketchup added for a bit of sweetness. 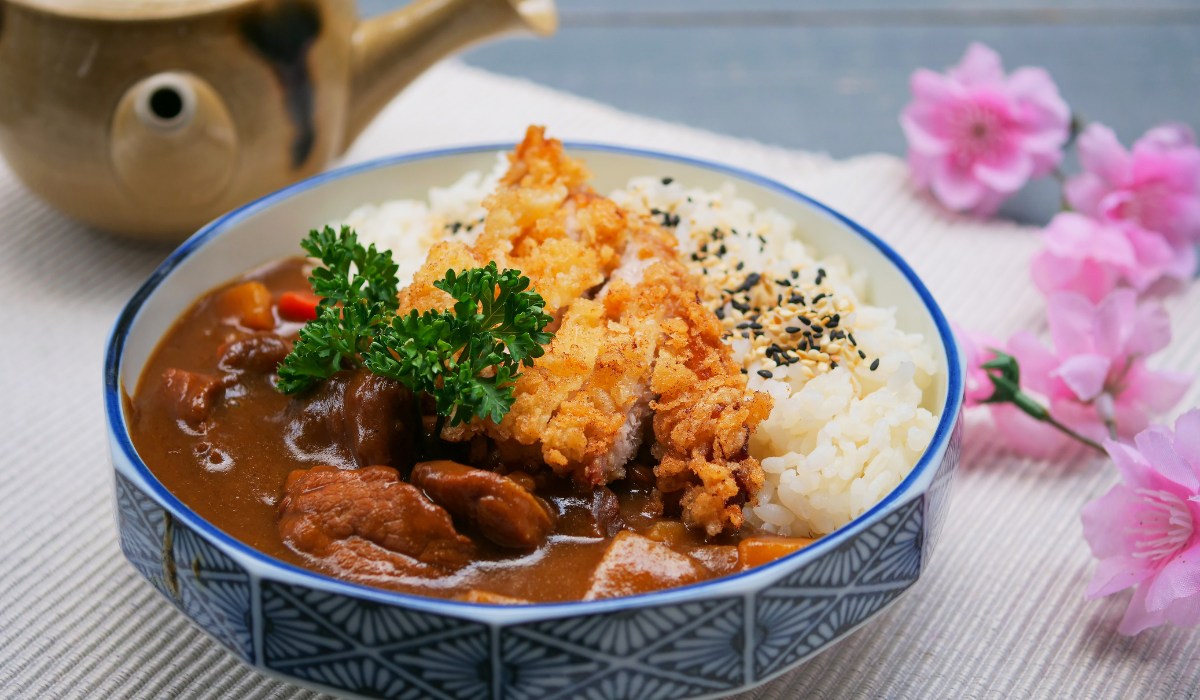 The base of a Japanese curry is always roughly chopped onions, carrots, and potatoes, with the meat added last. Add just enough water to cover the ingredients, add your curry mix, and simmer until everything is cooked through. Most Japanese homes don’t make curries from scratch, they use various assortments of ready-made curry mixes, and each family has their preference and may add a little extra flavor.

How did curry get to Japan in the first place ?

You may be wondering how curry got to Japan, since curry is widely accepted as a decidedly Indian staple food. Well, curry was first brought to the Western world when the British occupied India, and brought curry along with them. The British fell in love with the decidedly more flavorful Indian food, and they’ve since incorporated it into their cuisine.

Fast forward a few centuries and the British were then trading with the Japanese, and curry spice mix was one of those trades. Initially the curry mix was adopted as a way for the Japanese Navy to prevent beriberi, a disease stemming from lack of thiamine (B1 vitamin). While curry was initially considered a Western dish, it quickly because more common and very popular among the Japanese, to the point where it’s not considered almost a national dish.

Curry is commonplace in Japanese cuisine and most households serve it at least once a week. The curry served in Japan today is quite different from the curry imported initially, as it’s been toned down in heat and number of spices, plus had sweetness added.

So do give both curries a try. you might find that Japanese curry is easier to start with, but there are also plenty of Indian curries that are traditionally mild. And if there’s something about curry that upsets your stomach, it’s likely a combination of ginger, capsaicin (hot pepper), turmeric which all get your transit going. There are common ingredients in Indian curry, but rarely found in Japanese curry.