Spices can simply give life to our foods, which is why we’re taking such a serious interest in them these days. This time we’re looking at nutmeg vs allspice, two powerful and wonderful spices. You will find both of them in desserts and foods in the cold season, and they may evoke strong memories. Let’s take a look ! 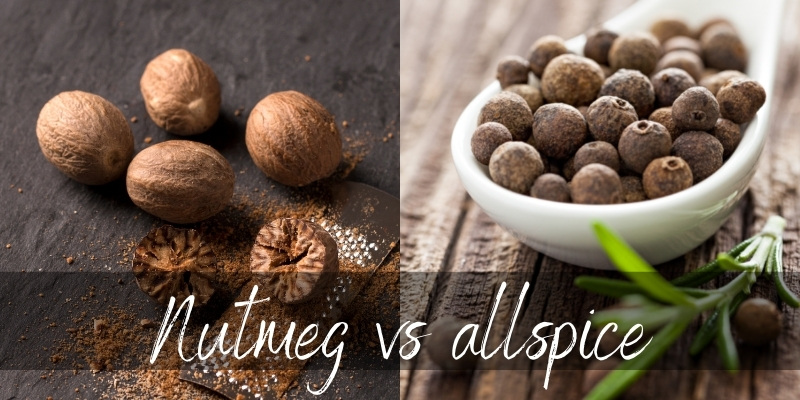 Table Of Content show
1 Nutmeg vs allspice
1.1 What is nutmeg ?
1.2 What is allspice ?
1.3 Allspice has a more complex aroma
1.4 Nutmeg won’t overpower your food
1.5 Allspice is a great all-round spice
2 Can you substitute allspice for nutmeg ?

Nutmeg is a nutty, pungent, slightly spicy and sweet condiment while allspice is a single spice resembling a mixture of cinnamon, cloves, nutmeg, and pepper. Where nutmeg has a simpler flavor profile, allspice covers many spices and is a great all-round spice to have.

Allspice is the unripe, dried berry of a type of a Myrtle tree originally from Jamaica, while nutmeg is the dried fruit of the Indonesian Myristica fragrans, distantly related to magnolia trees and tulips.

Nutmeg is the dried inner fruit of an evergreen tree that is originally from Indonesia, in the Banda islands. It provides a nutty, pungent, mildly sweet and spicy aroma. You will usually find it in savory foods, though you can find it in desserts as well. In savory foods it is often found in very hearty, heavy foods like scalloped potatoes, turkey roast, stew, and gravy.

You can find nutmeg in whole or powdered form. Whole nutmeg is a bit more expensive but holds its aroma very well, lasting several years. You only need to grind a little when necessary, and it’s easy to use with a small grater. Pre-ground nutmeg loses its aroma fairly quickly after opening the packet.

Allspice is the dried, unripe berry of another evergreen tree, this time native to Jamaica. If left to their own devices, the berries ripen to a dark blue color, sweeten, and resembles a flavor between black currants and blackberries. The seeds must be ingested by birds and react to their stomachs, otherwise they won’t germinate.

Back to the unripe berries, they are picked when still green and then carefully sun-dried over several days or weeks. They are a dull brown and the size of a pea. Because they are unripe, their sugars do not develop so their other aromas come to the forefront. So, allspice has been dubbed so because once dried and ground, it resembles a cross between cinnamon, cloves, nutmeg, and peppercorns. 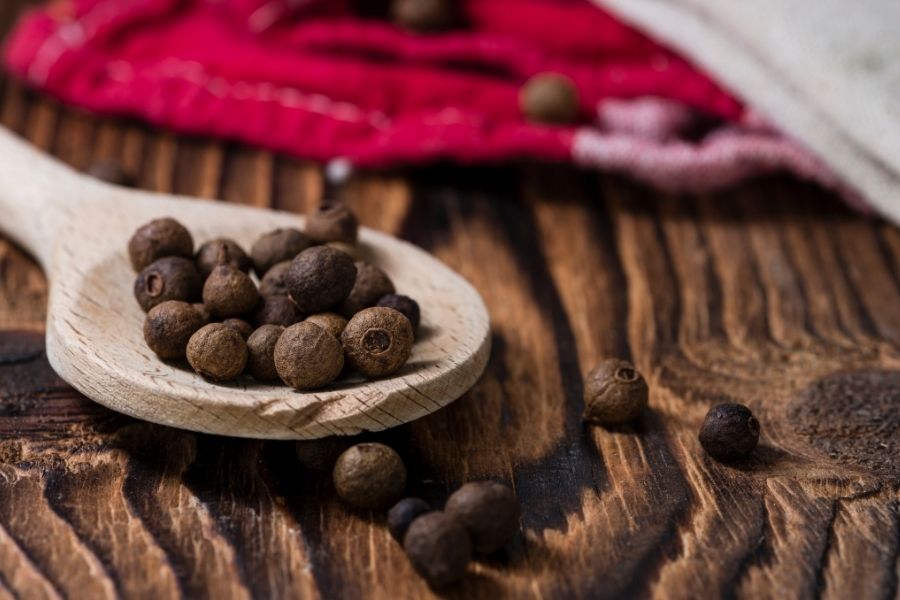 Now let’s take a look at a comparison between these two spices.

Allspice has a more complex aroma

Between the two of them, allspice has the more complex aroma. After all, it reminds you of cinnamon, nutmeg, cloves, and peppercorns. These are all in varying proportions, and they form a very complex and strong aroma.

Nutmeg has a more delicate aroma by comparison, though it still stands out on its own. It’s a much simpler, possibly more refined aroma. Nutty, pungent, and vaguely sweet are the main ways to explain nutmeg’s aroma.

If you’re wondering what part of nutmeg you can taste in allspice, it’s the pungency and very slight nuttiness.

When you add a bit of these spices to your food, you have to be careful. Allspice can easily overpower your food, thanks to its resemblance to cinnamon and cloves. This means a little goes a long way, and in some cases you can add more than you realize at first.

Nutmeg is milder and more delicate by comparison, so it won’t overpower whatever you’re cooking. You will still feel a bit of nutty, pungent flavor but not enough to hijack the dish.

Again, be careful with how much spice you add to your food. Any kind of spice can become too strong if you add too much.

Allspice is a great all-round spice

Because allspice has a very well rounded flavor, it’s the best candidate for the go-to spice everyone should have. Instead of having several spices and using them together, it’s simpler to get allspice.

Ah but the problem is this spice is rarer than cinnamon, which is among the most common ones. And allspice has more than just a sweet aroma, meaning it will not sit well with everyone.

Can you substitute allspice for nutmeg ?

Nutmeg and allspice have very different flavor, so using one in place of the other will not yield the result you’re looking for. Where nutmeg is nutty and pungent, allspice is spicy and somewhat sweet, and they bring out different things in your food.

However if you’re simply looking to add some spice, of any kind, then you can easily use nutmeg in place of allspice, and vice-versa. There is something about using any plain ol’ spice that instantly lifts a dessert or dish. This only works if you’re not looking for a particular aroma.

And that’s pretty much it for nutmeg vs allspice. Both are great spices in their own way, and you can use any of them in any way you like. Just remember to not use too much, just add a bit.