Arugula isn’t the most well understood leafy green out there, nor is it the most common. But in the past decade or so you’ve seen it in more and more salads, on pizzas, in sandwiches, and in cheese melts. And it’s always that one flavor that drives people apart, just like coriander does. You either love arugula or you can’t stand it. Why ? It’s almost always at least a little bitter.

So why is arugula bitter ? Is there a less bitter version ? Or are you doomed to never have it in your life ? What do you even pair such a leaf with ? All this and more, coming right up ! 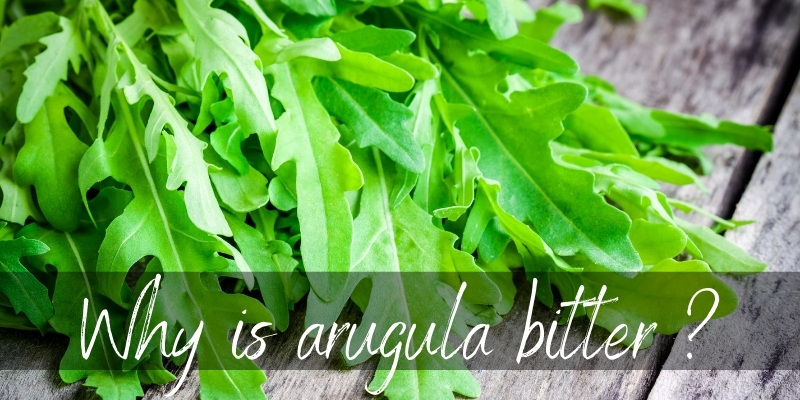 Table Of Content show
1 Why is arugula bitter ?
2 How do you remove the bitterness from arugula?
2.1 Is baby arugula milder ?
3 What does arugula pair well with ?
3.1 Cheese
3.2 Other vegetables
3.3 Leafy greens
3.4 Olives
3.5 Eggs
3.6 Bacon, ham, any deli meats
4 Can you eat arugula with black spots ?
5 Should you wash arugula before eating ?

Why is arugula bitter ?

Arugula is bitter because it contains glucosinolate, a compound naturally found in cruciferous vegetables and used as a defense mechanism. The longer the arugula plant is allowed to grow, the higher the chance for bitter leaves. The degree of bitterness depends on the age of the plant, whether it has bolted or not, and also the weather.

How weather can make arugula more bitter, and also trigger it to shoot up flowers (bolt). Just like basil, once this happens the leaves are too bitter to eat.

For those wondering, arugula is indeed part of the Brassicaceae family, related to cabbage, broccoli, Brussel sprouts, and asparagus. Yellow mustard is also part of this family, which is why sometimes its siblings may taste a little pungent and peppery, they all contain glucosinolate in varying proportions.

How do you remove the bitterness from arugula?

Cooking also helps remove the bitterness from arugula, if you saute arugula they should become less bitter.

Yes, baby arugula is milder because it did not develop as much, so it is still a tender leaf, with a good flavor but without bitterness. How big is baby arugula ? It’s usually classes as baby when it’s under 3 inches long, so if you have your own growing at home try harvesting it at that point.

Or, you may try to harvest it sooner, since people have reported home-grown arugula to be stronger in taste, and bitterness. If yours is also bitter, you may want to harvest it before it even reaches the 3 inch mark.

What does arugula pair well with ?

Because arugula is such a peppery, pungent flavor it can pair well with deeper, denser flavors such as almost any cheese, eggs, most meats, and it may also go with different vegetables. In fact, take a look at the following list since it may give you a bunch of ideas.

Any sort of chees will work with arugula. It can be mild cheese, aged Cheddar, Parmesan, blue cheese, feta, mozzarella, anything you like ! As long as there’s some semblance of flavor there, arugula will pair with whatever cheese you can think of.

Just a word of caution for stinky, ripened cheese. Arugula can make some foods smell a bit off, even if they’re still 100% edible. It’s simply the combination between arugula and some foods, especially the ones with a lot of protein.

If you heat up arugula, like in a grilled cheese sandwich, remember that it loses some of its bitterness but may smell off. 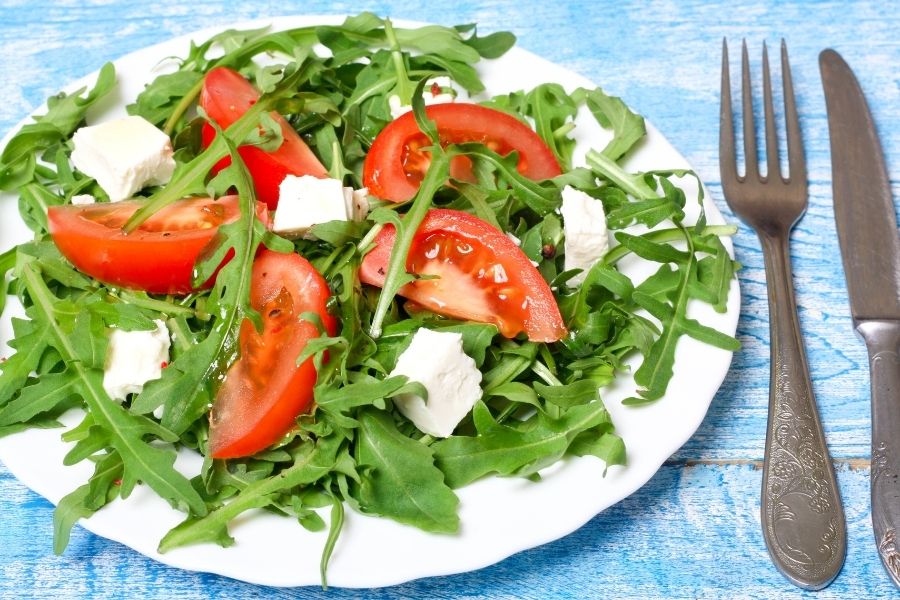 Other vegetables are always a great pairing for arugula. Some of the first images that comes to mind are grilled zucchini, fresh and sweet tomatoes, cucumbers, and even grilled mushrooms.

Aside from this, starchy vegetables are always a great choice. Simple baked potatoes with some chopped arugula, sour cream, and jalapenos ?

We’re not sure sweet potatoes would work very well here, but something earthy like celery root would go great, as would some raw cauliflower.

Nearly any leafy greens are fine with arugula. After all, half the time you’ll find arugula in a salad, and that’s usually with leafy greens. It could be any sort of lettuce like romaine or iceberg or even butterhead will work just fine.

Other, flavorful greens like radicchio or shredded cabbage may not work very well with arugula, since they’ll compete for flavor.

Olives, especially green olives, just seem to have that tang and spice that goes with arugula hand in hand. Of course you can add any olive you like, including kalamata and black olives. In fact it may be a great idea to use a mix of olives.

Eggs are great with arugula, but they work especially well if they’re boiled instead of poached or fried. Something like deviled eggs with some chopped arugula in the yolk mix, or topped with arugula infused mayo ?

While any meat will work with arugula, we’re partial to deli meats for this particular leaf. Think of the best sandwich ever. It likely has some sort of thinly sliced deli met in there, right ? Well, add in there a handful of arugula and you’ve got a winner !

We recommend sticking to meats that are lighter in flavor, so nothing like aged salami, chorizo, sausage, or something similar. Milder ones like smoked ham, Bologna sausage, or prosciutto cotto.

Can you eat arugula with black spots ?

No, arugula with black spots should not be eaten, and it should be discarded immediately. The black spots are a sign of a bacterial infection and it can quickly spread from leaf to leaf.

Conversely, if you notice a fluffy, powdery light growth on the leaves you should discard them as well. This is downy mildew, and it’s usually triggered by too much moisture.

Read Also: Why Is Kale Bitter?

Should you wash arugula before eating ?

Yes, always wash your arugula before eating. Only wash a few leaves at a time, so you can properly clean them. Do not wash the entire bag if you’re not going to immediately eat them, because this will raise the moisture content and you’ll have a higher chance of getting mildew.

As for why you should wash arugula in the first place, it’s because you can sometimes still find some sort of dirt on the leaves. Obviously, you’ll want to rinse it off. We’re very much aware of how annoying it is to handle wet leaves, since we personally hate rinsing parsley leaves. But it must be done, and you can always pat the leaves dry with a paper towel.

In short, arugula can be bitter but if you pick it young enough it will be just delicious, without the bitterness. Of course, some people may find they have very sensitive taste buds. So for them, any sort of arugula is too much.