As part of our spice series, today we’re taking a look at allspice. What it is, what it’s made of, how to substitute it, and where it comes from. This is a very versatile spice and it conveniently resembles a blend of several spices in one. This also makes substituting it easier than with other spices. So let’s take a closer look at allspice ! 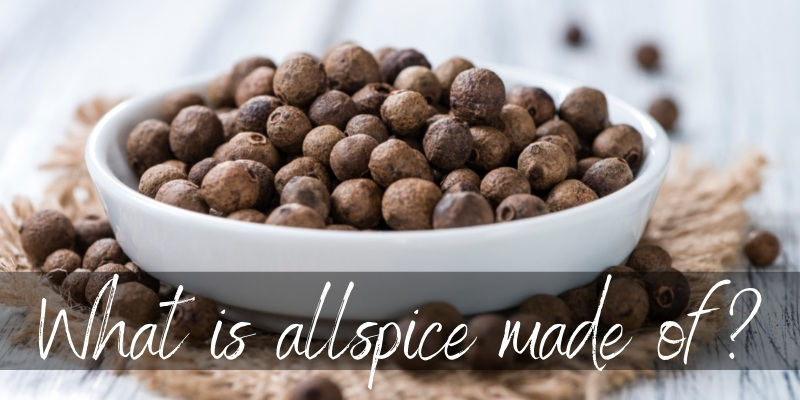 Table Of Content show
1 What is allspice made of ?
1.1 Where did allspice originate ?
1.2 How is allspice made ?
1.3 Do not confuse with Chinese 5 spice
1.4 What do you use allspice for ?
2 What can I use as substitute for allspice ?

What is allspice made of ?

Allspice is entirely made of the dried unripe berries of the Pimenta dioica tree, native to Central America. It tastes like a combination between cinnamon, nutmeg, and cloves, hence the ‘all spice’ name. It’s not made of several spices, instead it resembles the flavor of several spices combined.

You can find allspice in two versions: whole or ground. Whole allspice looks like dried brown berries, about the size of a pea. Ground allspice is very easy to confuse with any other spice, since it looks just like ground cinnamon or nutmeg, a brown powder.

Keep in mind that allspice does carry some mild heat. It won’t be very hot, but you will definitely feel it if you add a lot, the same way cinnamon will taste hot.

Where did allspice originate ?

Like most other spices, allspice originates from the warmer climates. In this case, it’s originally from the Caribbean islands, Mexico, and Central America. It’s heavily used in those regions’ cuisines, to the point where another one of its names is Jamaica pepper.

Originally allspice was only grown in Jamaica, since it needed the local birds to ingest the berries so that the seeds could germinate. This was unknown for a long time, so attempts to bring the allspice tree to Europe and Northern America failed. Once this was found out, growing allspice outside of its original place became possible. By that time though, it was already known as allspice, or Jamaica pepper.

Nowadays most allspice comes from India, because it is the main exporter. However China is the main importer, and they resell most of their imported allspice.

How is allspice made ?

Allspice is made from the berries of the allspice tree. They’re picked when unripe, because they hold up better when dried in the sun. On an interesting note, allspice berries turn a dark blue shade when fully ripe, and they become sweet, with an aroma close to juniper and blackberries. But by then the flavor changes so much it does not resemble the dried allspice we all know.

So, once the unripe, green berries are picked they are left to dry in the sun for several days, until fully dry and they have a dark brown color. They are smooth and about as large as a pea, and as such look very different from a lot of other round spices.

After drying, the allspice is either packaged as-is and sent to be sold, or ground into a fine powder and sold in that form.

Do not confuse with Chinese 5 spice

The name ‘allspice’ may translate into ‘lots of spices’ for some people, and it can easily be confused with the Chinese 5 spice mix. In reality, allspice and five spices are two completely different aromas.

Where allspice is sweet, mildly hot with cinnamon, nutmeg, and cloves as the most obvious notes, 5 spices work differently. The Chinese 5 spice mix is an actual combination of 5 spices:

The overall flavor of the 5 spice mix lends itself better to savory dishes, mainly because of the fennel and peppercorns. It’s also hotter than allspice. The exact percentage of each of the 5 spices varies from brand to brand, but you can easily make your own at home.

What do you use allspice for ?

Allspice is great for several types of foods, including sweet and savory dishes. This means you can easily find it in pies, puddings, cookies, stews, soups, sausages, pickles, and a whole lot of ethnic foods. It is heavily used in Middle Eastern dishes, the Caribbean, Northern Europe, and even the U.S.

What can I use as substitute for allspice ?

If you don’t have allspice in your pantry that’s alright, it’s fairly easy to fake at home. After all, allspice resembles a mix of spices: cinnamon, nutmeg, cloves, and black pepper. So if you have those at home, you can easily make your own ‘allspice’.

Make sure you have the ingredients in powder form, otherwise they won’t really mix well.

In terms of proportions, nutmeg and cinnamon are the top notes, with cloves taking a backseat, and black pepper only an accent note. Of course, you can experiment with proportions and find the mix you like best, or the one that resembles allspice the most in your opinion.

In short, allspice has a very confusing yet incredibly concise names. It is a spice that tastes like all the spices (at the time), and it’s a wonderful replacement when you need something to taste of different flavors all together. And it’s fairly easy to replicate, though a mix of several spices won’t bring you the exact same flavor as true allspice.