Commonly a part of the Indian cuisine, Paneer cheese is capable of complementing almost any meal. The great chewy texture and a wonderful flavor make this variety of cheese quite a favorite of many around the subcontinent. It not only blends with the different ingredients, but also doesn’t overpower them.

The fact that it doesn’t melt makes it a part of several stir-fries and grilled meals, while also being used in dessert recipes. This fresh cheese comes in blocks or cubes in most Asian and Indian markets.

If you are planning to work up a recipe that calls for paneer, but you haven’t been able to find it around, you really don’t need to skip the dish. In fact, you can go for a readily available substitute for paneer cheese and cherish the treat just right. 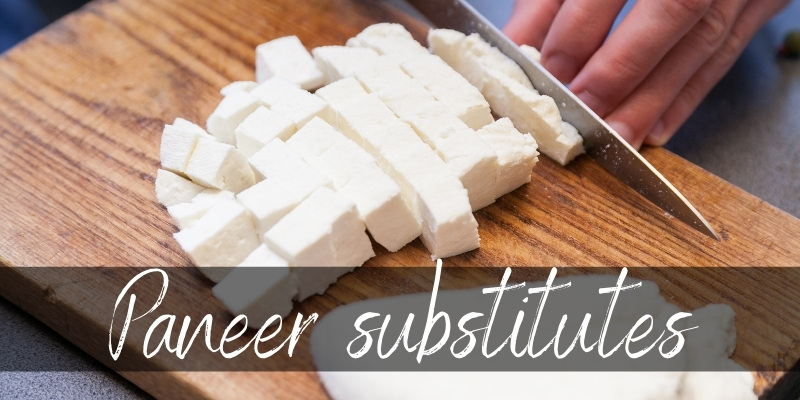 Most varieties of cheese that are prepared in the same fashion as paneer can work as a great substitute to the same. Paneer is made from curdling milk by the addition of lemon juice or lime, with no rennet added.

Generally, it’s unsalted and loaded with nutrients like proteins. And due to to the way it keeps its shape it’s a great addition to many vegetarian dishes that call for a meat replacement.

Now let’s take a look at each of Paneer’s many substitutes, and how to use them.

Prepared with sheep’s milk, Halloumi cheese can be called a wonderful substitute for paneer cheese. It’s a semi-hard cheese that can also be worked up using the milk of cows or goats. It’s not only easily available in the markets, but also equally easy to make at home.

The slight difference between halloumi and paneer is that the latter is a high acid cheese while halloumi contains almost no acid at all. High acidic content and low acidity are actually both helpful in preventing the cheese from melting. 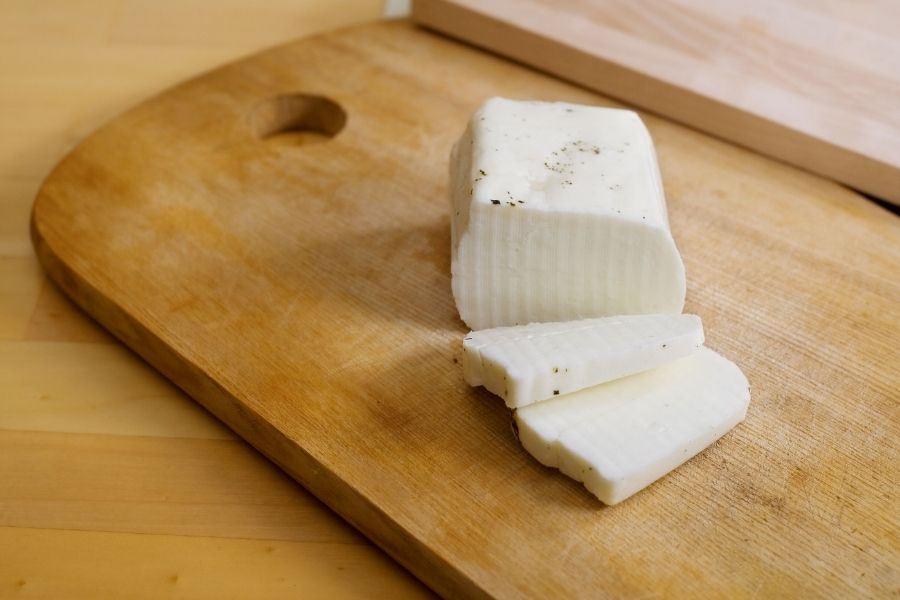 Being cherished for hundreds of years in Cyprus, Halloumi has gained popularity around the globe due to the fact that it can be grilled and fried without losing its structure – which also makes it similar to paneer yet again.

It sports a high melting point and generally served cooked, thereby coming with a lovely salty taste and a crispy touch on the outside.

Just like paneer, halloumi is a quite versatile and can be used in place of paneer when making wraps or sandwiches. You can also add it in salads to add a creamy, milky taste.

Known for its grainy, aged cheese texture, Feta is yet another wonderful substitute for paneer cheese. Typically, feta is crafted from a mixture of sheep milk and goat milk, further being packaged and sold in the form of solid blocks.

The crumbly cheese with a bright hue is a brined, white cheese sporting a nice soft, creamy touch to itself.

Feta is a Greek word that means ‘slice’ and the variety of cheese also originated in Greece. However, it has got a certain salty taste unlike paneer, and that’s why it’s recommended to use smaller quantities of the same in a paneer-involving dish to stop it from overpowering the overall flavors.

You can perfectly substitute paneer cheese with feta when preparing curries. The grainy cheese works wonders in salads, sandwiches, omelettes, pastries, or as a garnish vegetables and meat. Made with sheep and goat milk, feta is known to be a healthy cheese as compared to several others that are prepared using cow’s milk.

Prepared usually from pasteurized cow milk, Panela cheese is a more-than-perfect paneer substitute. Mexican panela turns soft when heated, but doesn’t melt – exactly like paneer cheese. Although Paneer originated in India, Panela from Mexico is practically the same thing when it comes to using the two.

Both the cheese varieties are termed “fresh cheese”, which means they are used quickly after they are made, instead of being put aside to cure.

Both are worked up with milk and an acid, while ditching a coagulator. Both the varieties tend to crumble beautifully, while allowing you to cut them if needed.

Just like paneer cheese, panela blends miraculously well with other ingredients without melting easily. Use panela cheese in place of paneer when preparing curries or soups. The dish is going to taste just like when you go for paneer!

Tofu is soy food that can also work as a good substitute for paneer. It originally comes from China, and is a non-dairy source of protein, thereby being quite popular among vegans and vegetarians.

When going for tofu to substitute paneer cheese, there are certain considerations to keep in mind. If you are using non-firm tofu, make sure you mash it properly to achieve the consistency similar to paneer. 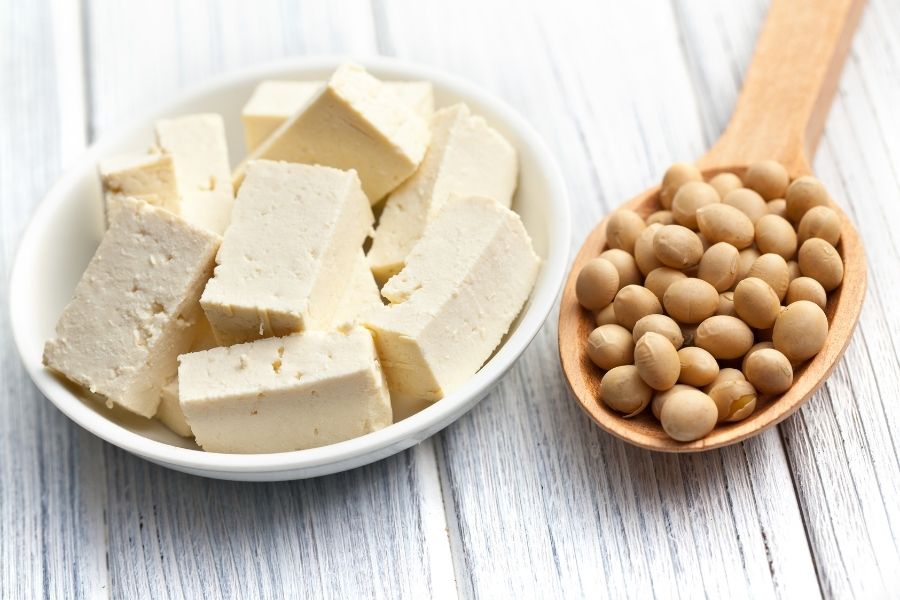 Tofu works wonders for making ravioli, cannoli, lasagna-filling, and manicotti. When using tofu in baked treats, you will witness it’s egg-like flavor disappearing entirely. Other than paneer, tofu is also a substitute for ricotta cheese while having a low amount of fat or cholesterol.

An Italian variety of cheese, Ricotta is traditionally worked up from the leftover whey of Mozzarella cheese and Provolone cheese prepared from the milk of goats, sheep, cows, or even Italian water buffaloes. It’s also prepared using pasteurized non-fat milk combined with some organic salt.

Just like paneer, Ricotta cheese is quite rich in the nutritious value and can replace it quite well when it comes to the flavor as well as the texture. The final dish tastes and looks exactly the same when you replace paneer with ricotta that has been drained just perfect.

However, make sure you don’t go for adding ricotta cheese in place of paneer when preparing some curries. Another thing to remember is that ricotta comes with a stronger taste than paneer and feels a bit creamier than it.

This one’s quite an expensive and rare cheese variety to find. A kind of fresh cheese, Fromage Blanc is buttery and yogurt-like in nature, thereby being used for dessert toppings quite often.

It’s low in fat and forms a good substitute for paneer cheese as well as cottage cheese. It’s mild sweet and tangy flavor makes it apt and appropriate for sandwich spreads.

This French cheese complements dishes when used with some spices and herbs, while pairing just right with fruits and salads. The creamy texture and it’s consistency makes this ingredient a must-try. Although, it’s quite hard to find, it works as a good substitute to paneer if you are preparing some baked treats such as lasagna.

Depending on the type of dish you are preparing as well as the ingredients you have got within an easy reach, you can go for one or more substitutes for paneer cheese from the aforesaid list.

While each of them comes with its unique characteristics, they are still surprisingly similar to paneer and work just perfect when it comes to replacing it with them and ending up in a delicious meal or snack.