Powdered and evaporated milk are both convenient ways to include more milk into your daily life. Sometimes it’s one, sometimes the other, and one or both of them are present in many pre-made foods you can pick up at the store.

So what is the main difference between evaporated milk and powdered milk ? Why are there two versions ? Is one better than the other ? Can you substitute one for the other ? All this and more, coming right up. 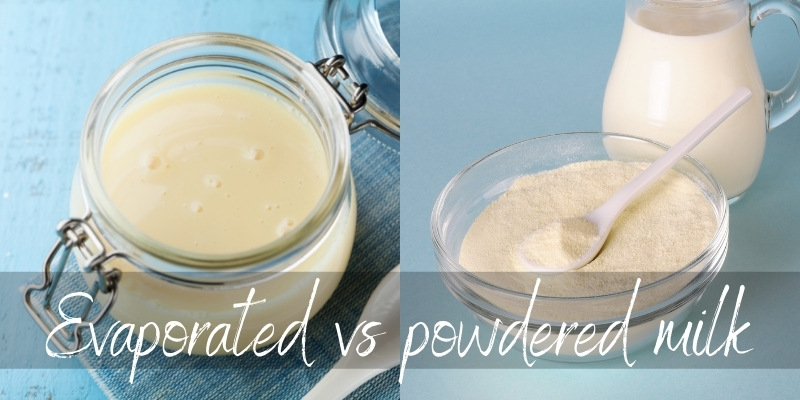 Both evaporated milk and powdered milk are common in stores, and you can find them from various brands. They keep very well, if stored in the right conditions so they’re great to take for long trips or ion places where you don’t have easy access to fresh milk.

What is powdered milk ?

Powdered milk is fresh milk that ahs been pasteurized, and them sprayed into a heated chamber. As the milk droplets hit the hot air, the water instantly evaporates and the milk solids fall to the bottom of the chamber. Those are then packaged and sold as powdered milk. It is the same product as dry milk.

Because the milk solids have no water or moisture, they may taste more concentrated if you don’t reconstitute the milk. This means the powdered milk is not sweetened (unless specifically labeled so), but the higher amount of milk solids per serving make it seem sweeter.

What is evaporated milk ?

Unsweetened condensed milk is another name for evaporated milk. This is fresh, pasteurized milk that is gently simmered until it reaches a 50% moisture content. This takes several hours, since high heat will curdle the milk and it will form a skin, so gentle, low, even heat is needed.

This evaporated milk still contains lactose, but it’s subjected to heat in such a way that is has started to caramelize. This means the taste will be different, more ‘cooked’ than powdered milk. 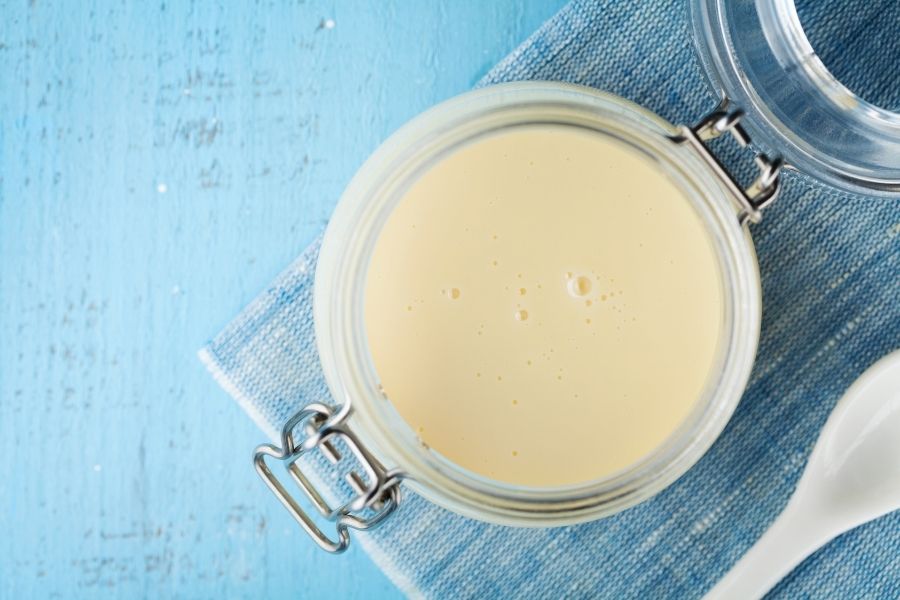 In fact you can find evaporated milk cans that claim to be shelf-stable for the next 25 years, in case of a war or event where you need to shelter yourself for a long time. No one has left either powdered milk or evaporated milk sit for that long, or at least no one has recorded it and came back with results.

So most brands simply claim a ‘best by’ date ranging between 18 and 24 months since production date. In truth you can let them sit for longer than that, as long as they’re unopened.

To store evaporated and powdered milk to store well, you need to keep them in a coo, dry place that is away form direct sunlight. You can keep them in the fridge, a cold pantry, or even in cupboards, as long as the room doesn’t get too hot.

You can get ‘fresh milk’ from both

You can get fresh milk form both evaporated milk and powdered milk, though it won’t taste the exact same way. To make liquid milk form powder milk, you need to use a 1:3 powder to water ratio. Use lukewarm water, stir very, very well, and let chill for several hours.

Since evaporated milk relies on a low and slow cook method, the sugars in the milk slowly caramelize. This means that when you reconstitute fresh milk from evaporated milk, it will taste more like boiled milk (which we love). In sore recipes this can be useful, and in some it may not be as useful.

Can you substitute evaporated milk for powdered milk ?

You can substitute evaporated milk for powdered milk, though you have to be careful with the moisture content. To get something similar to evaporated milk, you need to add 1:1 water to milk powder, and work in a bit more water if you have to. Again, remember to sue lukewarm water to get the milk solids to dissolve.

If trying to substitute powdered milk, you will have a hard time drying evaporated milk. Instead look at the recipe, and see where you can remove some moisture if possible. This may meat removing some oil, or some water, or juice, or any other cooking or baking liquid.

Why isn’t evaporated milk a gas ?

Evaporated milk isn’t a gas because the ‘evaporated’ part refers to the water that is evaporated as the milk simmers. Despite the name, it is not the milk solids that turn to gas, instead it is the water that the mil solids float in.

This means there are more milk solids per 100 grams of evaporated milk than there are in 100 grams of fresh milk. This is why it tastes sweeter without having any added sugar. The natural sugars in fresh milk are slowly cooked and they caramelize.

Ways to use evaporated milk or powdered milk

You can use evaporated milk and powdered milk in several ways, depending on what you’re feeling like or what you’re intending to make. Their use can range from something as mundane as coffee creamer to making caramel, it’s up to you. Here’s a few ideas to get you started.

You can get caramel by slowly heating evaporated milk

Since evaporated milk has a fair amount of natural sugar, the more you cook it (on low heat) the more the sugar will develop and eventually turn to caramel. Please note this works much better with sweetened evaporated milk, as it has more sugar to work with.

Now, to make caramel that you can spread or use in recipes you always need to add some sort of dairy to the burning sugar. So making caramel out of an already sweet dairy product is much easier.

You need a pot of water, enough to cover the can. Place the unopened can of evaporated milk in the water, put a lid on top, and simmer, gently, very gently for as long as you can wait. It usually takes about 4 hours. If you want to keep a closer eye on things, you can dump the contents of the evaporated milk into a thick-bottomed pot, and simmer that on low for three hours, stirring constantly.

You can use evaporated milk ins largely the same way you’d use cream, except it’s sweeter than cream and has a lower fat content. This means you cant whip it into whipped cream, but you may use it in many desserts. And even in coffee, and get a Thai coffee, as long as you make a very strong coffee.

Add powdered milk to baking for a better flavor

To get a creamy, milky flavor in your creams you can mix powdered milk. Refrain from adding any sugar at all in the creams, because you’ll be adding a lot of milk powder. It’s a bit sweet on tis own, and it can make your resulting cream way too sweet if you add some sugar as well.