Wondering what to choose between endives and lettuce ? To be fair they’re both in the produce section, specifically in the leafy-greens-to-throw-in-a-salad part.

Is there really a difference between them ? Can’t you use them both the same ? Apparently there is a difference, several actually. Which you use will determine the look, feel, and taste of your dish in significant ways. Now let’s get explaining. 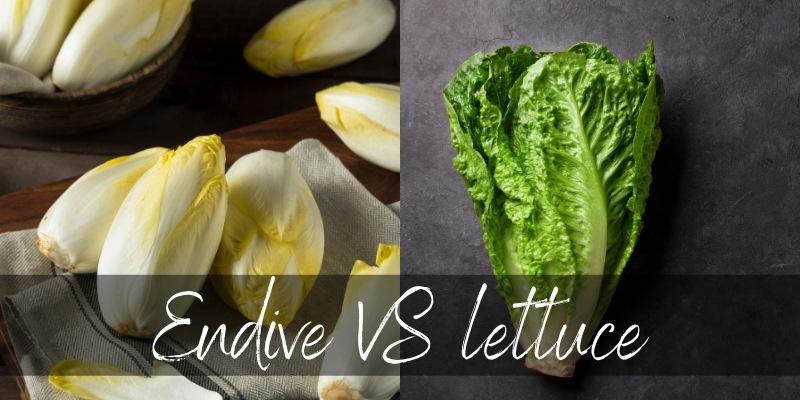 Table Of Content show
1 Endive VS lettuce
1.1 Endive is bitter, lettuce isn’t
1.2 There are more types of lettuce than endive
1.3 Endives are chicory, and different from lettuce
1.4 Lettuce is common summer, endives in fall
2 Is endive a lettuce ?
3 Are endive and chicory the same thing ?

Endives and lettuce are two different leafy greens. Endives are from the chicory family (like radicchio), while lettuce is from the daisy family. Where lettuce is mild and somewhat flavorless, endives are bitter and will change the flavor of your salad or smoothie.

There’s also the fact that lettuce is mostly water and las less fiber to start with, while endive packs more of a crunch and has double the fiber of any lettuce out there. Endives have less sugar and a bit more antioxidants than lettuce (source).

You have more of a chance of finding lettuce in supermarkets, simply because there are more lettuce types than there are endives. And lettuce seems to be the leafy green of choice for salads, sandwiches, platters, or anything that needs to look pretty and green.

Let’s go through each of these factors, and explain them a little better. This way you’ll really understand what each green has to offer, and which to pick for your particular dish.

If bitterness isn’t your thing, the endives should never be on your shopping list. By bitter we don’t mean you can’t eat them, but endives are definitely noticeable in anything you add them to.

That bitterness mellows down when you cook endives, but they will lose their structure and wilt. If you’re making leafy green soup then endives are great, as they will retain more of their shape than lettuce.

As for lettuce, their taste – any lettuce out there – is pretty bland. It won’t compete with anything, but it will provide a satisfactory crunch and refreshing ‘green’ taste.

You may find that lettuce is sometimes bitter. That’s only in the stem part, so be sure to rip or cut out the thick stems of any lettuce.

There are more types of lettuce than endive

If variety is what you’re looking for then lettuce is the one for you. There are more types of lettuce than there are types of endive. Don’t believe us ? Let’s list them.

Of all of these, there are several varieties to choose from when shopping. Even if you realize you wound up buying 4 lettuce heads, of which 3 are the same kind, they all look different and make for a really impressive presentation. 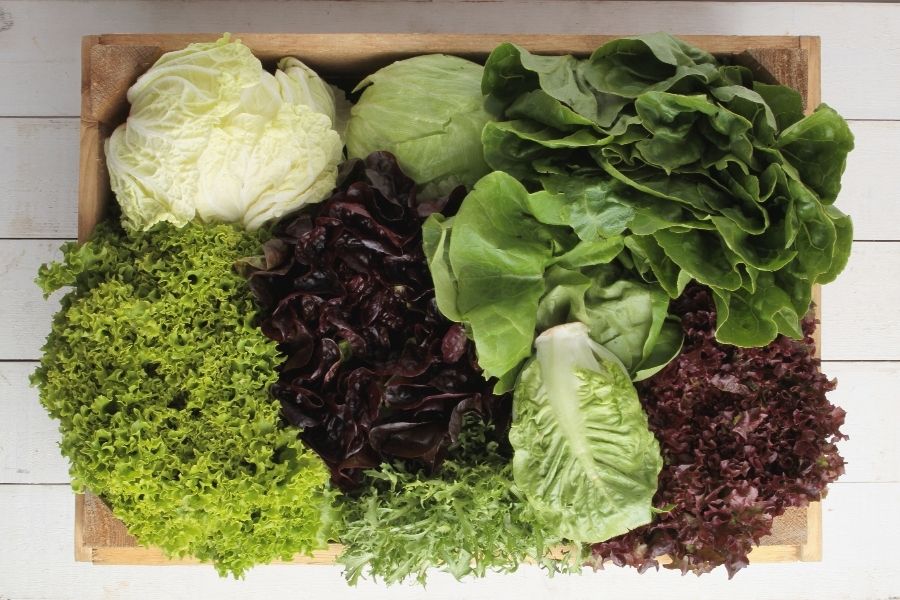 Whichever of these you pick up, you can expect them to be mildly bitter and should thus be used sparingly.

Endives are chicory, and different from lettuce

Getting a little technical, these two plants are just that: two different plants. Endives are from the chicory family. This gives them a very earthy, bitter flavor. More of a structure and texture too, as they have more fiber.

Lettuce are derived from the daisy family, and grown primarily for their leaves. It has a very long history, dating all the way back to ancient Egypt. It was grown mostly for seeds to produce oil, and was associated with the religious festivals. From there the Greeks borrowed the lettuce, after which the Romans kept growing it too.

Lettuce became a household staple, and was easy enough to grow.

There’s also the growing season to look at. Both lettuce and endives are available year-round because of greenhouses. But their seasons are different. Endives are plentiful and cheap in early fall, when the first cold snaps appear.

On the other hand, lettuce is in season in summer, when there’s plenty of sunshine and heat. These plants are also very fragile, so they’ll be sold somewhat close to where they were harvested. This means you can reach out to your local famer community and ask if you can buy directly form them, for a lower price.

Is endive a lettuce ?

No, endive is not a lettuce. Endives are from the chicory family, while lettuce is from the daisy family. However they’re used in very similar ways. Both are great in salads, sandwiches, soups, and can also be found on grills !

However lettuce is there mostly for show and to bulk up a salad. Endives are there to provide flavor, much like rocket/arugula.

Are endive and chicory the same thing ?

No, endives and chicory are not the same thing but they are from the same family. They’re very closely related, but the chicory plant is used for its root. It’s a blue-flowered, tall herb with leaves similar to arugula. Arugula is a close family member too !

Chicory root is a common food additive, especially in coffee and can even be found in coffee substitutes. The stalks and leaves of this plant are usually eaten by livestock.

As for endives, they look completely different. The way you see them in supermarkets is pretty much they way they grow. The roots are underground, while the bunched leaves are above ground.