Soy sauce is an amazing food item. It’s a dip, a condiment, a sauce, a dressing, it can be whatever you want it to be, but why is it black, though?

And we all know how food with soy sauce looks: dark, with a rich reddish brown tinge and it’s absolutely delicious.

But as much as we love soy sauce, we sometimes can’t help but wonder why it’s so dark. In some cases you might even see it as black, and it some lighting it might look like a very dark red.

Thankfully there’s a very competent and thorough explanation, which is going to make things much easier to understand. There’s some chemistry involved so we’ll try and keep it simple. 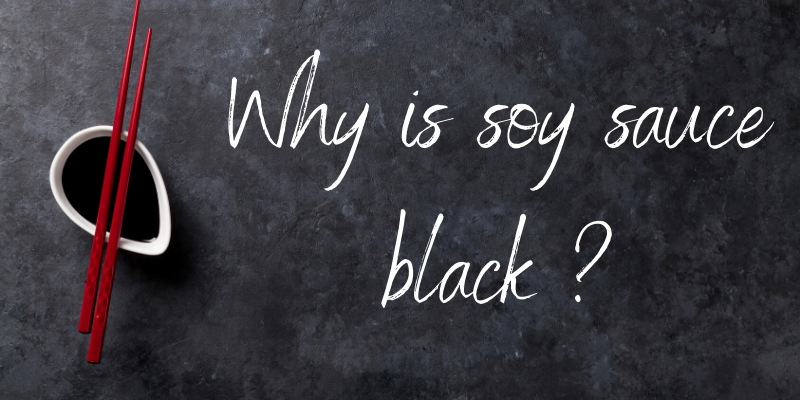 Why is soy sauce black ?

Soy sauce is black or a very dark brown firstly due to a variety of factors that can all be traced back to chemical process known as the Maillard reaction.

This is the same reaction that gives seared food its dark color and makes it crispy.

The second reason soy sauce can be black is due to added food coloring or flavorings that may have a darker color. Examples include caramel used as both sweetener and to darken a light soy sauce.

For the most part though, it’s the Maillard reaction and we’re going to explain that in a minute.

How soy sauce gets its color

The chemical process known as the Maillard reaction is something that sounds so fancy and mysterious but is actually incredibly common.

If you’ve ever seared a steak, you know you need high heat and to not move the meat for several minutes, until it’s brown on one side and moves very easily.

Any browning through cooking, including melting sugar for caramel, is a Maillard reaction.

This process works though the interaction between aminoacids and reducing sugars – meaning sugars that are capable of being reduced, like table sugar or most natural sugars.

You need heat for this reaction to take place, and time. In the case of steaks high heat and several minutes is enough. 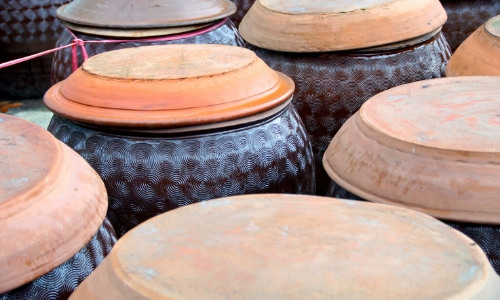 For soy sauce though, things are different. In ancient times big urns were used to ferment the soy beans in the sun, keeping them heated.

Nowadays the soy beans are placed in containers to ferment, in rooms that are kept constantly warm. Along with the soybeans themselves there’s also roasted grains, brine and one of two molds – either rice or soy mold.

The interaction between these items over months on end, at a consistently warm temperature, is what leads to the browning and darkening of the sauce.

The natural sugars in soy and grains – though in small amounts – darken and reduce, and the biggest difference is seen in the first week of fermentation.

Sometimes the soy sauce isn’t left to ferment long enough – it can take up to 3-4 months, minimum – and instead some food coloring is added to make the sauce appear darker.

Read Also:Here’s Why Real Soy Sauce Is So Expensive

You’ve definitely seen dark soy sauce and light soy sauce on shelves. And you may have been to a Chinese restaurant and seen that their soy sauce is nearly jet black.

Why is that, and why is there such a range of colors ?

Well, a very important factor is how old the soy sauce is. Remember, the Maillard reaction is what gives it its dark color and it needs heat and time to happen.

The longer the soy sauce is left to ferment, the darker it will be. The umami flavor deepens and you won’t taste the soy beans as much as in a lighter sauce.

So in short, dark soy sauce is aged soy sauce and it’s both saltier and a little sweeter than regular soy sauce. And a little thicker too ! 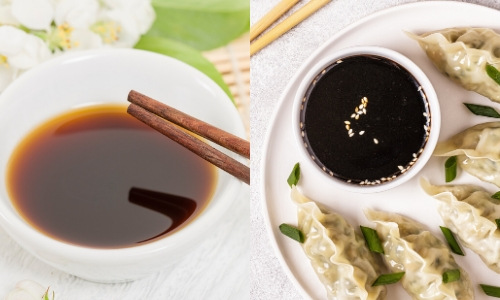 Light soy sauce is very young soy sauce, and it’ll never be more than a dark golden brown. As a result of being left to ferment less, the soy bean flavor is easily identified and it won’t be very thick, instead being on the watery side.

The labeling on it may be confusing though.

What makes soy sauce low sodium is the process of removing nearly half the salt in it, after it’s been brewed. This can happen with dark, aged soy sauce and with light, fresh soy sauce.

It’s just that some companies use the word ‘light’ to describe the salt level, not the age or color of the soy sauce and this can make folks understandably confused.

We know now why soy sauce is black, but why is soy milk white ?

Although it might sound like a simple question, it’s still worth explaining because it’s a huge difference in color.

So let’s take a look at soy beans themselves. They’re light yellow/cream, and this isn’t reflected fully in either soy sauce or soy milk.

Well, we know soy sauce gets very dark because of fermentation, heat, Maillard reaction, aging. This happens to any food that’s subjected to high heat for a period of time.

But what about soy milk ? In this case we need to take a look at how soy milk is made.

You need to soak soybeans in water for several hours (or until fully hydrated), and then grind those beans in a very good blender. You’ll notice that the process is like making any other nut or plant milk. 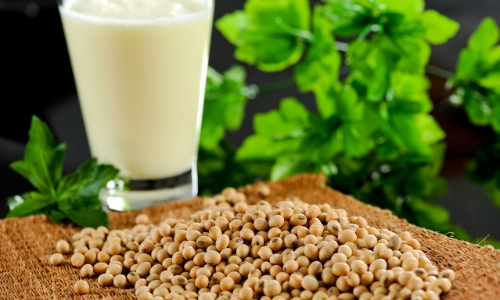 After the beans have been ground, the solids are strained and the remaining liquid is the soy milk. It’s then boiled to make if safe to drink, and also to give it more shelf life.

Notice the milk hasn’t changed to a dark brown, despite being boiled/subjected to high heat. This is because it’s only heated for 15-20 minutes and if it were left to simmer for several hours it may turn slightly darker, but it would need some extra sugar to get there.

The main reason soy milk is white – or off-white to be specific – is because the inside of the beans is that color, and boiling it won’t change it very much.

So that’s it, dark soy sauce and white soy milk. Know that if you’re looking for that very dark, rich soy sauce you need to look for aged soy sauce. It’s not the most common but if you look hard enough you’ll find it.

So, soy sauce is black due to the chemical process called Maillard reaction and due to other food colorings and flavorings that are added to the original soy sauce to make it look better or taste better. Now you know why soy sauce is black and the fact that it can come in different colors not only black, but this one is the most common one.