Does your recipe call for soy sauce, but you’re not sure you’d like the taste ? Then you may find this article useful.

You’ve probably heard people rave about how delicious soy sauce is, but did anyone stop to explain what soy sauce tastes like for someone who never had it ?

No, probably no one has. And it’s a shame because some folks may think ‘ugh soy, no thanks’ and just step away from the sauce shelves.

Soy sauce really deserves to be celebrated, but how can you know if you’d like it if you’ve never had it ?

Well, we’re going to explain it for you. Yep, we’re going to do our very best to let you know what soy sauce tastes like, so you can judge whether you’d ever like to buy some or not. 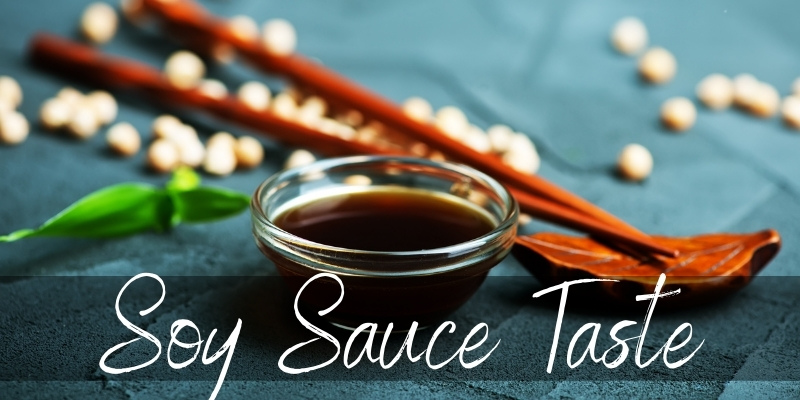 Soy sauce is considered to have a strong umami flavor. When you first taste soy sauce, the flavor profile is initially salty, vaguely meaty, followed by a sweet taste, ending with a very slight bitterness.

Soy sauce is a liquid condiment from East Asia that comes from East Asia, made from fermented soy beans, fermented wheat, and a very specific mold type. Due to this process it ends up being nearly black.

It’s the fermentation process that lends the flavor profile of the soy sauce.

The saltiness in the soy sauce is primarily due to common salt in the soybeans’ brining liquid.

The starch in the soybeans adds sweetness into the soy sauce when the sugars in the starch hydrolyze.

The umami flavor in the soy sauce occurs due to the overall flavor of soybeans. Soy is one of the closest mimics of meat flavor, and this translates into an umami (meaning tasty in Japanese) flavor that makes you want more.

As an example, you can try having fried or crispy tofu. Tofu is made of soy, so if you’re okay with pan-seared tofu then you have a good grasp of the umami in soy sauce.

There are a lot of factors that can influence what soy sauce tastes like. One country’s soy sauce may be a little different from another, since recipes vary from one region to another.

In broad terms, soy sauce is made from soybeans, wheat, water, and salt, and falls into two categories.

Brewed or fermented soy sauce takes months to create. Like a bottle of wine, the older it is, the better it tastes, with the best soy sauces being at least two years old. 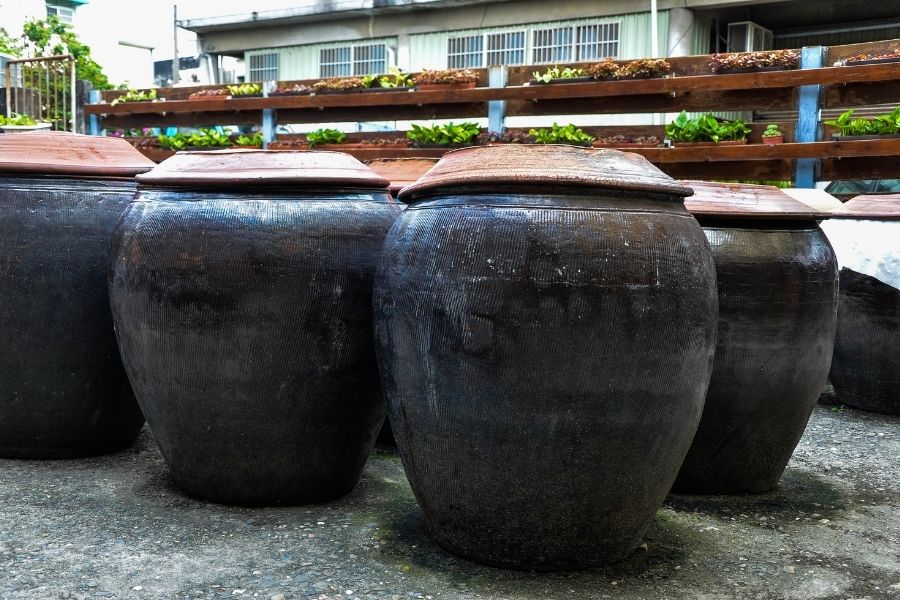 These are the darker, slightly thicker soy sauces that simply taste better than hydrolyzed soy sauces.

A soy sauce that has been brewed for months and years will develop a complex taste, where someone with a sharp observational skills will notice different notes in the sauce.

Non-brewed soy sauces are produced within days and are a mixture of hydrolyzed soy protein and other flavorings such as corn syrup or caramel.

Unfortunately non-brewed or hydrolyzed soy sauce is the most common on the market, since demand is high and the general production time is long.

Soy sauce that is non-brewed tends to taste much saltier than brewed soy sauce, to the point where all you can taste sometimes is salt and soy. It’s a real shame, especially if you’re looking to make authentic Asian food or would like a really good flavor kick.

And all countries have their cheap and expensive, or aged and hydrolyzed soy sauces. So let’s talk difference between countries.

Another split that occurs in soy sauces is the geographic style. While there are varying soy sauces styles based on cuisine, the two more popular types in US grocery stores are Japanese and Chinese. 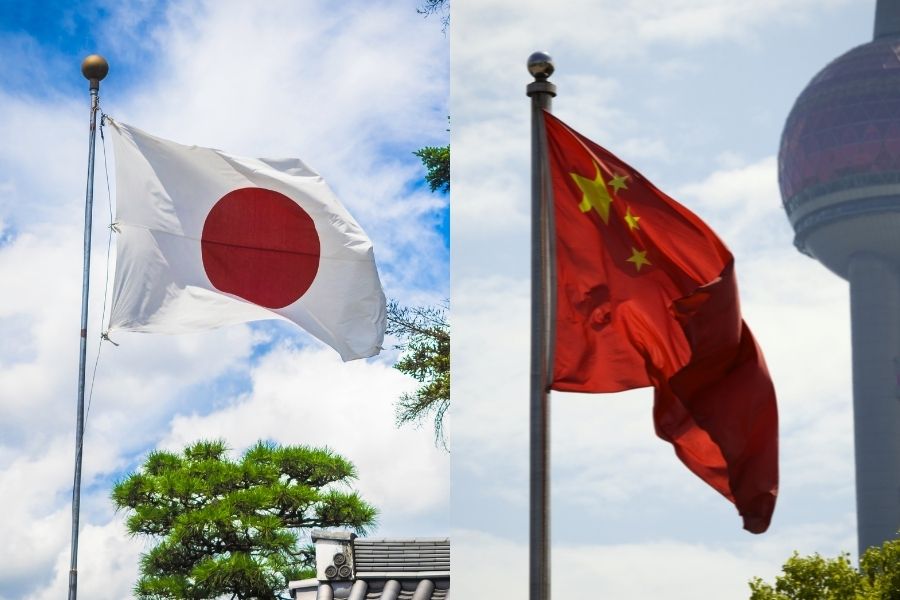 We’ll cover other soy sauces from other regions as well, but they’re simply not as well documented as the Chinese and Japanese versions.

The Chinese sauces may contain added sugars, while Japanese ones do not. This difference in ingredients means that Japanese soy sauces tend to have a lighter, rounder flavor that borders on sweet.

Whichever you use depends on what you cooking style is. Chinese soy sauces seem to go best with fast-food-like meals like fried rice or street food, with strong flavors and deeply satisfying. You’ll often find Chinese soy sauces infused with other flavors like mushroom, ginger, or sesame.

On the other hand, Japanese soy sauce is more delicate and is a better option for lighter foods, where the focus is on freshness and flavor, such as a good sushi. Overall the Japanese tend to cook their food simpler, with less emphasis on salt and too many spices, but it still comes out delicious.

Soy sauces from other regions

While Chinese and Japanese soy sauces are the most common ones to find, other soy sauces have their own unique flavor profiles.

Indonesian Soy Sauce – This option has a sweet flavor with a maple syrup texture. It is an excellent choice if you want to add sweetness to your dish.

Mushroom Soy Sauce – This is a dark soy sauce that is infused with dried straw mushrooms. It adds an earthy flavor to dishes, especially dishes that may go great with mushrooms, or where you need to fake the taste of meat.

Thick Soy Sauce – This option is also known as soy paste. This option is sweeter than other soy sauces as there are added sugars and more wheat used in the fermentation process. It’s great for adding flavor to fried rice dishes, as it can withstand the flavor of rice.

Shrimp Flavored Soy Sauce – This soy sauce is created when the soy sauce is infused with dried shrimp brine. This works exceptionally well in Chinese stir-fries that contain seafood.

Taiwanese Soy Sauce – Also known as black bean soy sauce, this soy sauce is made from black beans rather than soy. This is a milder soy sauce that carries a subtle fragrance. This option can be used in place of most other soy sauces, depending on your preferences.

Fujian Soy Sauce – Traditionally known as Xi Zai Qing, this soy sauce is considered the royalty of all soy sauces. It is made from premium beans and fermented for a more extended period.

This soy sauce is more challenging to come across than the other options on this list. If you do find it, you will find that it is more expensive than other options. It’s best used as a dipping sauce as it is full-bodied and has a deep flavor. 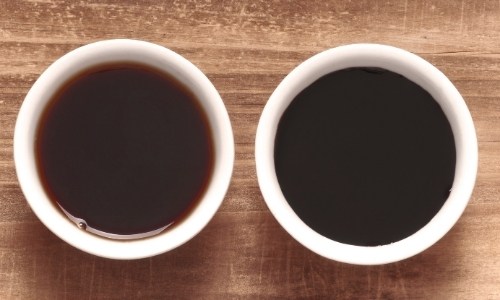 A third distinction is in the color of the soy sauce. The color is primarily due to the length of time it is aged.

Both Japanese and Chinese soy sauces have light and dark options, and in both cases, the light soy sauces are thinner and lighter in color.

However these light, more delicate soy sauces tend to be heavier on the soy flavor and not as complex.

Dark Chinese soy sauce is aged the longest of all the soy sauces and may contain molasses, which may also make it sweeter and thicker. This is not always the case, as very often you will find really dark, inky soy sauce that is labeled as Chinese and is not sweet at all.

Dark Japanese soy sauce is what you are most likely to find on the grocery store’s shelves at “typical” soy sauce.

And no, light soy sauce has nothing to do with the salt content. Light soy sauces is not light in salt, as the salt doesn’t change the color.

You may instead find soy sauces that are labeled ‘low sodium’, you should check those if you’re looking to cut back on salt. They may be light or they may be dark in color, you can find both.

If you are looking for an authentic soy sauce, you should check out Chinese or Japanese markets.

Check the labels to ensure that you are getting what you want out of your soy sauce. You want a bottle that reads “brewed” or “traditionally brewed.”

Additionally, you want a bottle with the fewest ingredients on the ingredient list to ensure that you are avoiding chemicals and preservatives.

From there, experiment with different brands and colors until you find the one that is most pleasing to your palate.

Please note that there are soy sauces and soy sauces. You will definitely find fake ones, even in traditional markets. when looking at the label, you should see: fermented soy beans, wheat, salt, water.

If you see any added colorings like caramel, added sugars, that is not real soy sauce.

In some weird cases you may find ‘soy sauce sauce’, which states it has 30% soy sauce, and then added water and flavorings. That’s simply watered down soy sauce that is passed off as the real thing.

And finally, watch out for derived sauces. There are sauces that you may think are soy sauce since they look the same, but they’re not.

For example Yakitori, Teriyaki, or Wok sauces are derived from soy sauce, but will also contain sugar, ginger, pepper, chili, onions and other flavorings. These sauces are simply shortcuts for those who want a specific dish style, and they are labeled as such.

Still, with how similar the packaging is you need to be very careful and to real the entire label on the back. 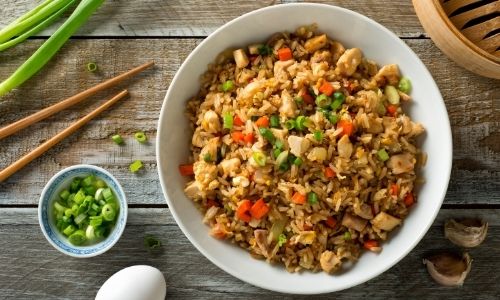 Now that you know the different flavor profiles of the other soy sauces on the market, we will look at when you should use each of them in your cooking.

Light Japanese Soy Sauce – This is an all-purpose option best used in small amounts. Great for use in foods where you don’t want to turn the food a deeper color.

Knowing about the different types of soy sauces available will help ensure that you can choose the best for your particular dish and taste preferences. Use the guide above to experiment with different options until you find the ones that you prefer.

There’s oyster sauce and rice vinegar and fish sauce and miso paste and all kinds of other seasonings that go into the food. In time you’ll discover them all.