I have compared jicama and rutabaga in this article, but I thought I would also compare turnip with jicama since turnip is much more popular, and there are bigger chances you want to know if you can substitute those two and what are the differences you should expect. 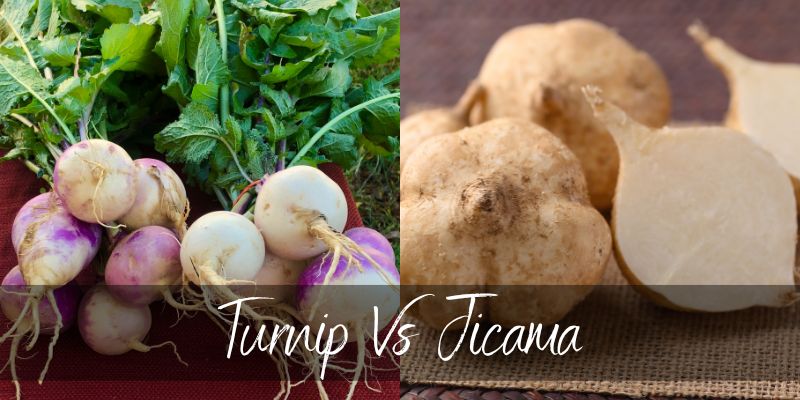 Table Of Content show
1 The main differences between turnip and jicama
1.1 Location and family
1.2 Taste and texture
1.3 Size
1.4 Uses
1.5 Nutrition
1.6 Convenience
2 Can you substitute jicama for turnip and vice-versa?
3 Conclusion

The main differences between turnip and jicama

I will list here all the differences between those two vegetables, even if they don’t really affect the taste and texture of a recipe that you are going for.

Jicama is very popular in Mexico and Central America. It is also called Mexican Turnip or Mexican Potato, so you would expect jicama and turnip will have the same taste and texture, but we will talk about those later.

Jicama is part of the bean family Fabaceae, and the botanical name is Pachyrhizus erosus which would be very hard to pronounce, the name comes from the fact that jicama is a species in the genus Pachyrhizus according to Wikipedia.

Turnip is part of the Brassica Rapa family which will make it closer to the cabbage than the potato, so this is one big difference between jicama and turnip. When you think of jicama, you have to associate it with potato, while turnip will be associated with cabbage even if cabbage is not actually a root vegetable. Turnip and cabbage are not part of the same family, but turnip and napa cabbage are, and napa cabbage has a lot of similarities with cabbage. So most people will make easier the association with cabbage itself.

Turnip is more popular worldwide than the jicama. It is thought that turnip originates from middle and eastern Asia, but it was quickly spread around the world since it was often used in the Roman Empire and also grows in Europe.

There is actually a difference in taste and texture between turnip and jicama even if jicama is called Mexican turnip sometimes.

Jicama has a sweet, nutty taste with a crunchy texture with a very slight moistness. You can think of it as a cross between a pear, an apple, and a potato. It can be hard to think about those as the same vegetable or fruit but if you try jicama, you will notice that this is true.

On the other hand, the turnip has a spicy undertone with a nutty flavor, but it is more of a fresh wet taste than jicama. The texture of the turnip is crisp and starchy, quite similar to the jicama’s texture.

Turnip is usually much smaller than jicama. Turnip is 2-3 inches in diameter, while jicama can be between 8-12 inches, so there is quite a difference between them.

Both have similar uses and can be used raw and cooked.

You will see more often cooked jicama compared to cooked turnip because it works great in soups or as a substitute for fried potatoes.

Fried jicama is popular and tastes great, while fried turnip can be a thing, but it is not so popular. 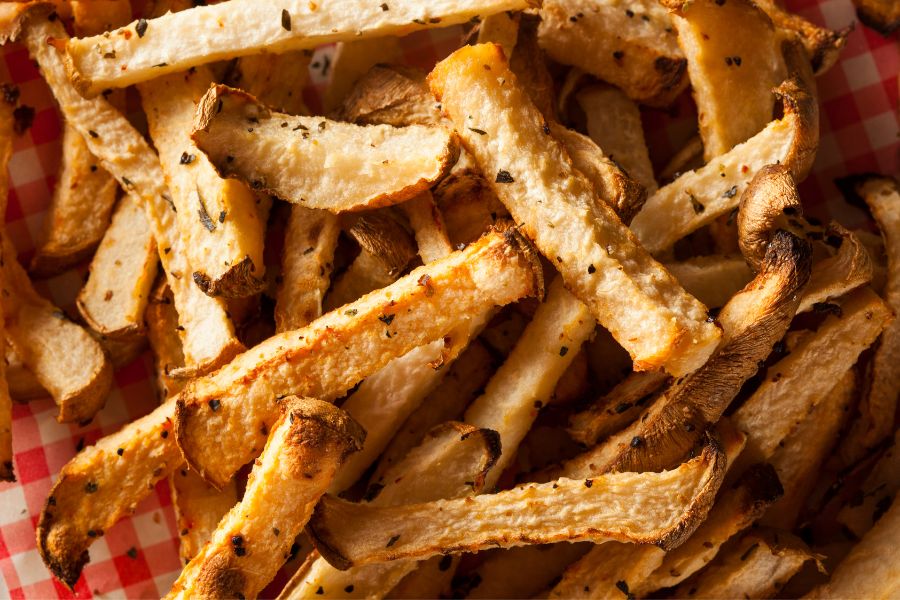 They both work great as a raw garnish or the main ingredient in a salad if you prefer a crunchy salad.

There are quite a few small differences in nutrition facts between those two. The most important ones are that jicama has more vitamin A and is lower in sodium than turnip.

While jicama skin is edible, it is like potato skin, it can be ok if cooked but not great to eat raw. This will make turnip a bit more convenient to eat since its skin is edible, you just have to make sure you wash it thoroughly before eating it.

Convenience is an important factor for many people, including me. If I can have two similar vegetables or fruits, but one is easier to eat, I will go for it. This reminds me that I wrote an article about seedless vs. seeded grapes; check it here.

Can you substitute jicama for turnip and vice-versa?

The answer is yes, you can substitute jicama for turnip and turnip for jicama, but you have to keep in mind that they have slightly different tastes and textures. However, they might still be the best substitute for each other in many recipes.

The one exception can be french fries. French fries would work best if you want to substitute fried jicama, but they would not be as healthy as fried turnip.

But in soups and stews, you can substitute them, and most likely, you will not notice the difference since the taste of cooked jicama will not be so strong when cooked and will taste similar to a cooked turnip.

In conclusion, we found out that there are a few differences between jicama and turnip, but you can still be substituted one for the other without affecting the taste of the recipe you are going for.

I hope this article cleared a bit of the confusion and you found out what you should expect from them as taste, texture, and uses.