Celery is a staple in most kitchens, and you will see it in everything from lunches to soups. It’s an inexpensive way to add nutrients and flavor to a meal.

The taste is quite different than most other herbs, so not everyone likes it. Lots of questions surround the best way to use it in a meal or for nutritional purposes.

Many people wonder what it is about celery’s taste that makes it so attractive, since you always see in it smoothies or hailed as a health food.

Well, today we’re tackling this topic, and hopefully will be able to convince you to maybe at least give it a try. 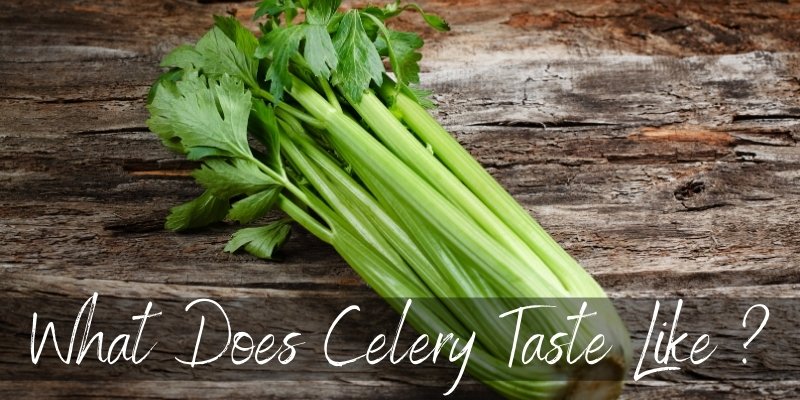 Celery has a mild and strong taste at the same time, giving it a bold flavor. It reminds you of raw or green onions in a way, with an earthy taste. It can also taste unpleasant to some people, and has a plant-like taste much like salad and kale does.

Think of mildly spicy beetroot, without the sweetness and with a more pronounced taste. The stalks are a bit watery, so you may notice a very watery or ‘green’ flavor.

It is widely accepted that celery has a very distinct and noticeable taste, so using it in a dish will make it for some, and break it for others.

It’s considered a savory snack with a great crunch, so those who like it praise it for this. When you eat it, you will notice that your tongue can feel slightly tingly due to the celery’s furanocoumarins.

Is celery sweet or bitter ?

It really depends on who is tasting it, since celery can taste bitter to some and sweet to others.

It also depends on hot you cook it. Fresh celery may have more of a bitter flavor, and may sting your nose and tongue.

Cooked celery, like baked or boiled may have more of a sweeter flavor, and this might confuse some folks.

How Can I Make Celery Taste Better?

A lot of people don’t enjoy the taste of celery, so many wonder what they can do to fix that problem. Thankfully, the solution is pretty straightforward: cover the taste.

Celery can be used as a side ingredient for many different dishes such as soup, dips, stews, and sauces, as well as party snacks.

You can eat it with hummus, peanut butter, dip, or even cream cheese. The great thing about celery is you can get creative, and the flavor combinations directly result from your creativity. 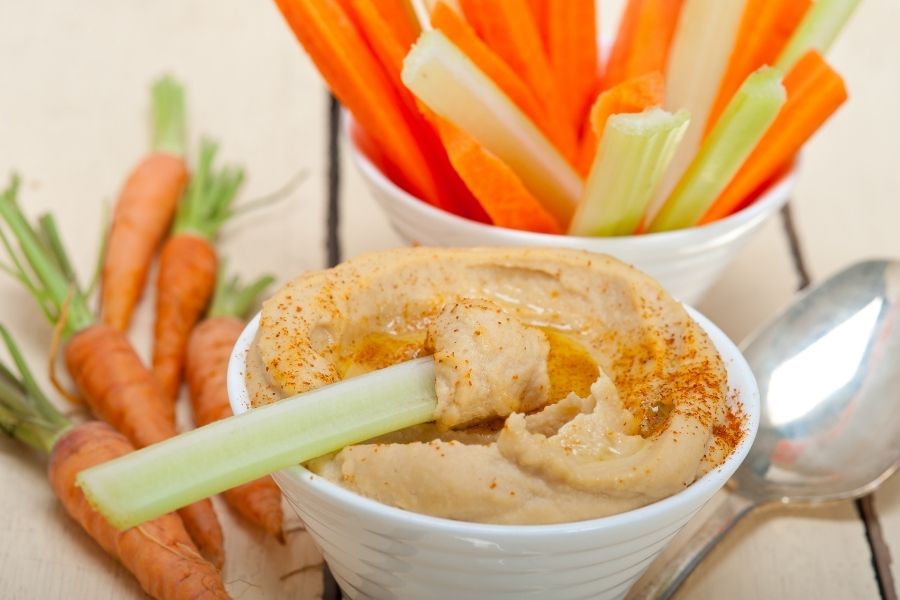 Roasting celery with other vegetables and spices is another popular option that you can use for a unique flavor for several popular dishes.

Garlic or mint (depending on the dish) may also help tone down the flavor of celery.

As simple as it may sound, you can just use less celery. Even if a recipe calls for a whole stalk of celery, you can get away with adding just a few bits. They’re very strongly flavored, so they will lend some taste without overpowering your food.

Also, if the recipe you’re using calls for celery try swapping it for leek or green onions, with maybe some beetroot added for that earthy flavor.

If you’re using celery in your food, know that you may please some folks and displease others. For this reason, it’s best to cook them separately if you know you have guests that hate celery.

For example, you can roast them separately, or provide several alternatives if using them with a dip. Alternatives could be carrots, asparagus, or even cucumber. 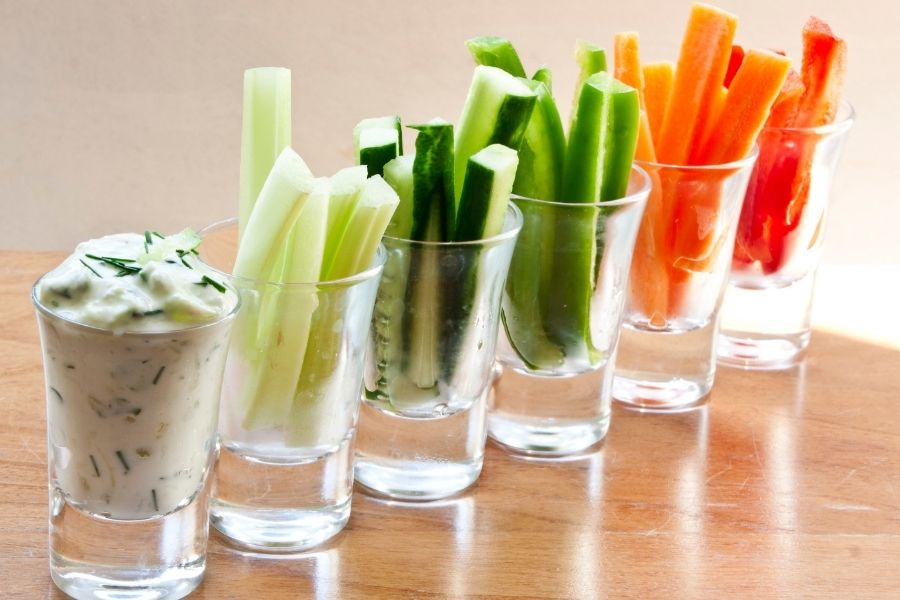 If you like the look and feel of roughly chopped celery but hate the stringy parts, consider blanching them first. Drop the celery into boiling water for 5-10 seconds just to soften the outside.

Remove them from the heat, and right into an ice bath or at least under cold running water. Now the outside should be soft enough for you to get in with a thin knife and remove the strings.

Or, if that sounds like too much work you can get a veggie peeler and try peeling the celery stalks. It may catch here and there, but it will eventually get the job done.

And finally, if you have way too much celery you can always chop it up and freeze it. It won’t have much of a texture after thawing, but it will be easier to use in smoothies, or in foods where it needs to be blended or mashed.

Many people have questions about celery, and it mainly ranges from how you should eat it. We’ll be covering some of the most common questions.

1. Is Celery Better-Tasting Raw, or in Liquid Form?

Celery juice is said to taste a little sweeter than celery in raw form. It is also a staple in many different types of smoothies.

The taste in smoothies would depend upon what else you add. Smoothies are known for being heavy on fruits or vegetables, so you can use whatever you like.

However, if you eat celery in raw form, you will gain more fiber. Another reason that consuming it in liquid form is so popular is that no one wants to eat a lot of celery at once.

A good way to cover up the taste of celery in a smoothie is to add strong flavors alongside it, like banana or pineapple. We can’t promise you it will taste great, maybe not even good. But it’ll definite;y cover up the celery.

Spices and condiments may also be an option, like ginger or cinnamon or cloves, if you’re alright with those flavors.

2. How Do I Prepare Celery For Cooking?

To clean and prepare celery stalks, you will need to cut the leaves and the base, followed by washing the stalks under running cold water.

It’s better to cut the stalks to the size you want on the first go. If you see any strings, remove them and peel them off.

From there, you can chop the chunks into smaller pieces and add them to whatever dish you like.

It’s a not good idea to keep celery at room temperature for more than a few hours at a time.

If you want to avoid celery from going bad, you will need to use a storage bag and make sure it stays in the refrigerator less than five days.

You can also use a plastic container and store it for the same amount of time. Don’t keep celery for too long since it will start to rot.

The vegetable crisper is your safest bet, but it would be a good idea to use an airtight container as well. Celery (especially if cut) has a strong smell and may contaminate other foods, so be mindful.

However, there are those who are sensitive to some foods. If you experience severe allergies such as itchiness in the ears and nose as well as a sore throat after eating celery, call your doctor.

Avoid overeating celery, because there are side effects. Of course, a bit of celery won’t hurt unless you’re really allergic.

5. Is it True Celery is an Aphrodisiac ?

No, celery isn’t an aphrodisiac. Although stories have said this is true in ancient times, the truth of the matter is, it was just a folktale.

Celery love potions at one time were sold everywhere, but it was later proven to be a placebo effect. It’s better to save your money and don’t fall for a celery love potion scam.

Now that you know what does celery taste like, there are several dishes you can experiment with. In the end, celery contains several vitamins and nutrients essential to a healthier lifestyle, and it’s good for you.

If you really don’t like celery at all, you can consider swapping it for beetroot, leek, green onions or just not use it at all.