Licorice has a bad reputation among anyone who even remotely likes candy. You reach into the bag and hope for something delicious, and instead get a black licorice gummy. Disappointment ensues. But you’ve likely heard that despite the candy being licorice flavored, the actual flavor in it is not real licorice.

Which begs the question, what is in black licorice candy, if not licorice ? And what does real licorice taste like ? The story behind all this is rather interesting, so let’s talk about this a little. 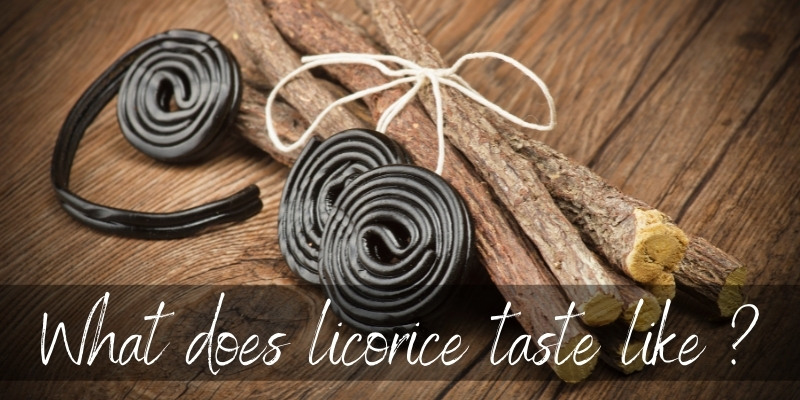 Licorice root tastes very sweet, with a slight woody note to it. Licorice root is very different from what is commonly sold with the label of licorice flavor, and this is due to extra ingredients added during production.

At its most basic licorice is a woody flavor, much like cinnamon. So is it sweet, woody, slightly floral, with a mild bitterness hidden under all of this. Licorice is also naturally sweet, and adding any sort of sugar or sweetener to it makes it unbearable very quickly.

There is a large difference between natural licorice flavor from licorice root, and the licorice flavor you find in candy. This is because commercial licorice flavor also has some aniseed oil added to it. This is what the black candy tastes like for most people, since aniseed is a strong flavor and can be very off-putting for many people.

So why does black candy never taste like real licorice ? Producers add aniseed oil in an attempt to add back some flavor, because pure licorice extract was difficult to make.

You see, originally people would use dried, cleaned licorice roots as candy in a way. You could chew on a piece of licorice root all day long and it would be sweet, and flavorful. Then the predecessor of Twizzlers and Red vine came along, trying to be actual candy-versions of licorice root. But they couldn’t use pure licorice extract as it was much too expensive, and in high doses can cause a few health problems.

So, they decided to add a bit of aniseed oil into the mix. Aniseed oil is actually incredibly strong in flavor, and it easily overpowers the licorice root extract. This became the shift to less licorice and more aniseed in candy, and it’s what people started to get used to.

Read also: Why Is Sourdough Sour ?

Some black licorice is salty

The result ? A salty, slightly bitter, slightly sweet, and definitely aniseed-tinged confection that takes some getting used to. Some people absolutely love it, like the Nordic countries of Europe, as it’s a classic candy over there and something children grow up with. Others ? Well, it’s an adjustment. 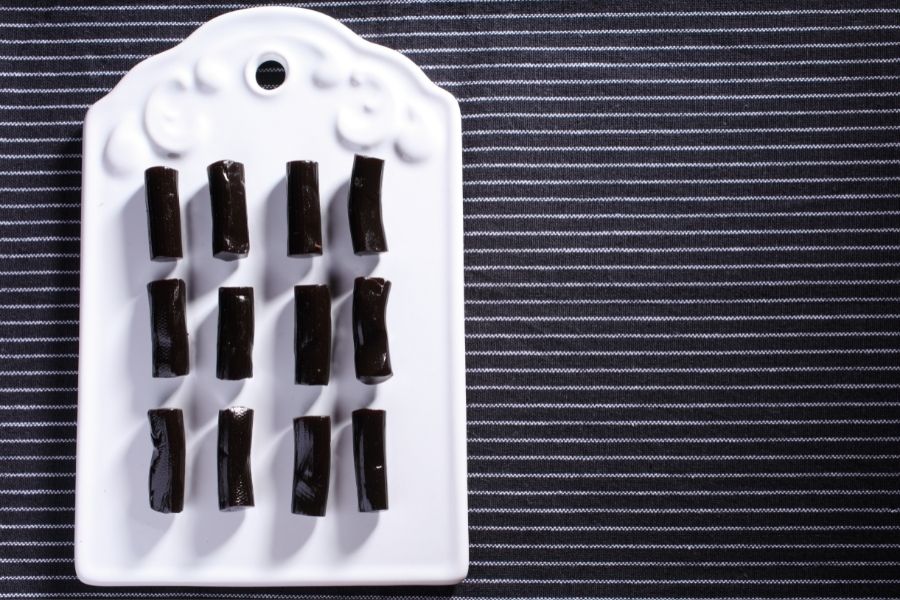 So while there is no aniseed oil added, or at least it can’t be found on the ingredient list, the amount of licorice extract is very, very small. Black Twizzlers also have added sugar, which does not reflect the real sweetness of licorice root.

Does this mean they’re bad ? In truth no candy is good, but we’re not about to judge you for loving black Twizzlers. You do you.

Why is licorice sweet ?

Real licorice, derived form licorice root, is sweet because it contains a naturally-occurring compound called glycyrrhizin. It’s a sweet-tasting compound that is related to sugar but tastes much sweeter on the tongue than regular cane sugar.

So this means you don’t need to add any more sugar or sweetener to something that has real licorice extract in it.

What can you use licorice root for ?

Licorice root can work great as tea, or simply something to chew on after a meal. Licorice root tea tends to soothe the throat and digestive issues, but should be taken in moderation. Too much licorice root (several cups per day, for several weeks) may lead to health issues.

As for chewing on licorice sticks, as long as they’re the real deal (not candy) they are a great way to refresh your palate after a meal, and remove strong odors from the mouth as well.

Why is licorice candy black ?

Black licorice candy gets its distinctive color from an attempt at giving it a resemblance to the original licorice root. The root is a dark brown, and the color of early black licorice was likely dark brown, due to molasses and licorice root extract. In time the candy may have gotten darker and darker, to the point we all know today.

Some companies don’t use food dye in their black licorice, instead keeping the candy a dark brown that is closer to the original licorice root the candy was supposed to imitate. But in time consumers have to come to associate the color with licorice flavor, and have even come to expect it to be the licorice candy color.

So, you could also say it’s a form of color coding, the same way red candy tends to be strawberry, cherry, or raspberry, while green candy tends to be green apple, yellow tends to be banana or lemon, and so on. In a way this is very reliable, since no other candies are pure black like black licorice, so if you don’t particularly like the flavor, you know to steer clear of these ones.

The only candy that may fool you is the cola-flavored candy. Those are a dark brown, but they tend to be semi-transparent, so if you hold one up to the light you should see the color much better.