Figs are some of the most amazing fruits you’ll ever find. They’ve got that look of ‘alien’ fruit while also being ancient and rich-looking. There’s just something about them that drives people crazy, especially the crunch of the seeds.

That being said, each time you find figs in your local market place, you’ll notice that they’re a little expensive. Depending on where you are, the price may be just too much. Colder climates generally have to import hot climate fruits, and figs are some of the most finicky of the bunch. 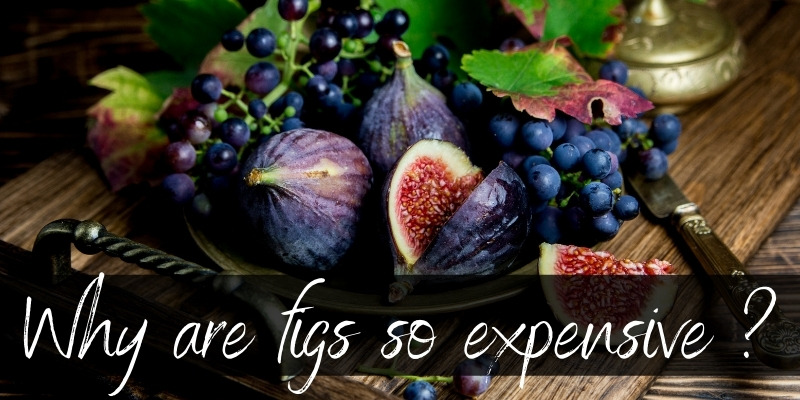 Table Of Content show
1 Why are figs so expensive ?
1.1 Figs have a very short shelf life (3 days)
1.1.1 You have a higher chance of finding dried figs than fresh
1.2 Picking figs is dangerous and burn the skin
1.3 Fig crops are often attacked by birds and gophers
2 The best figs are Black Mission and Brown Turkey
3 California figs are the most widespread in America
4 How to pick the perfect ripe fig

Why are figs so expensive ?

Figs are so expensive because they have a very short shelf life (3 days), during which they have to be sold, or dried and packed. They go off very quickly and producers risk losing entire crops this way.

Another reason is that figs have to be picked off the trees, and this produces a a milky sap that burns the skin. Workers have to be very careful and use protective gear when picking figs.

And finally, there are fig predators, like starlings and gophers. They can eat and poke holes in fruits with amazing speed, and those fruits can’t be used or sold anymore. This is a big loss for farmers, so there’s always going to be a markup just for this.

This should go without saying, but figs are imported in many countries. This means a lot of middlemen between the fig farmers and you, and each one raises the price further. Now let’s explore these reasons in detail, shall we ?

Read Also:When Are Figs In Season

When we say figs have a short shelf life, we really mean a short shelf life. Even avocados last longer ! You see, figs are picked when they’re ripe (or just under), but once they’re off the tree they ripen real quick.

So quick that they actually start to rot after about 3 days. This means that any fig that is ever picked needs to be transported very quickly to a market. If you like in a fig-producing country, you have a high chance of finding reasonably priced, fresh figs. 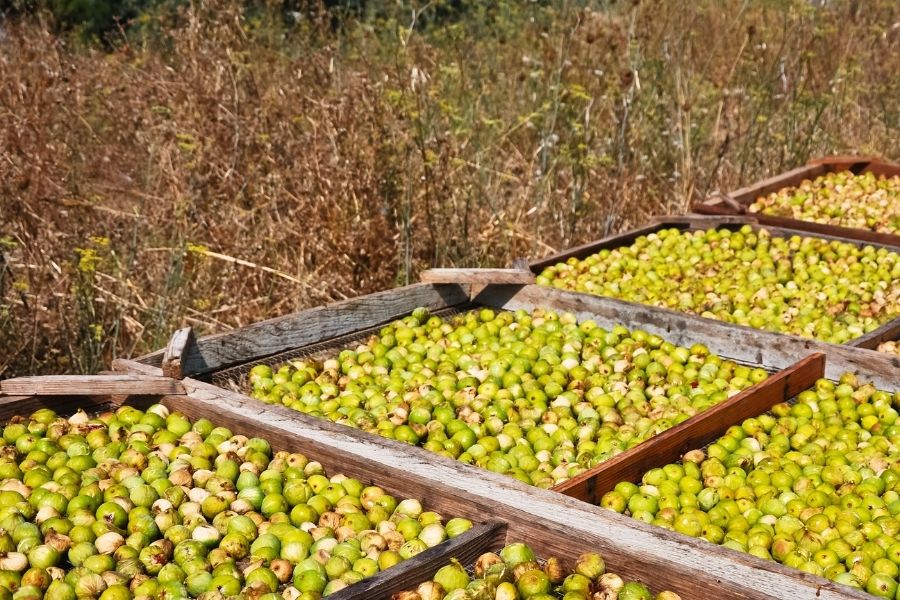 Those countries are Turkey, Egypt, Morocco, Algeria, Iran, and Spain. If you’re from America your best shot is on the West coast, since most are grown in California.

For everyone else, figs have to be imported from the above countries. This means they have to be shipped very fast, and that is an extra fee.

If you do live in a colder country, far from a fig-producing country, and still find fresh figs, they’re most likely grown in hothouses. Unfortunately those figs are never as sweet as the open-air crops, and they will still be relatively expensive.

You have a higher chance of finding dried figs than fresh

Because of their incredibly short shelf life, figs are often sold dried. This makes a lot of sense, because a lot of figs would only get spoiled during transport.

Shipping them dry and shriveled makes sure none are spoiled during transport. But it also means you have a very slim chance of getting your hands on fresh figs.

There’s good news though. Even if the figs you’ve found are just dried figs, you can rehydrate them. They won’t have the same color or look about them, but they will be back to juicy and plump.

To rehydrate figs, you need to soak them in boiled (not actively boiling) water for a couple of hours, and cover them. Some figs rehydrate in a few minutes, some may take an hour or more. Keep an eye on them so see when they’re done.

Picking figs is dangerous and burn the skin

Fig picking is not a piece of cake. In fact, it’s a little dangerous and implies a lot of manual labor. Each fig you see is picked by hand by workers. This takes a lot of time, and they risk the skin on their hands and fingers betting burned off by the milky sap the fig stems release when they’re pinched.

Some workers have a small knife that they use to cut the fig off the tree, and this makes things much easier but it takes longer. They’re meant to wear protective gloves at all times.

All of this needs to be accounted for, and there’s that fact that this is manual labor. Any crop that ahs to be hand-picked will be expensive, just like saffron, strawberries, and blueberries.

Fig crops are often attacked by birds and gophers

There is quite a bit of fruit loss in a fig crop. The fruits grow alright, but there are birds and animals that come and eat the fruits. In come cases it’s a manageable amount, and in some cases it’s just too much. 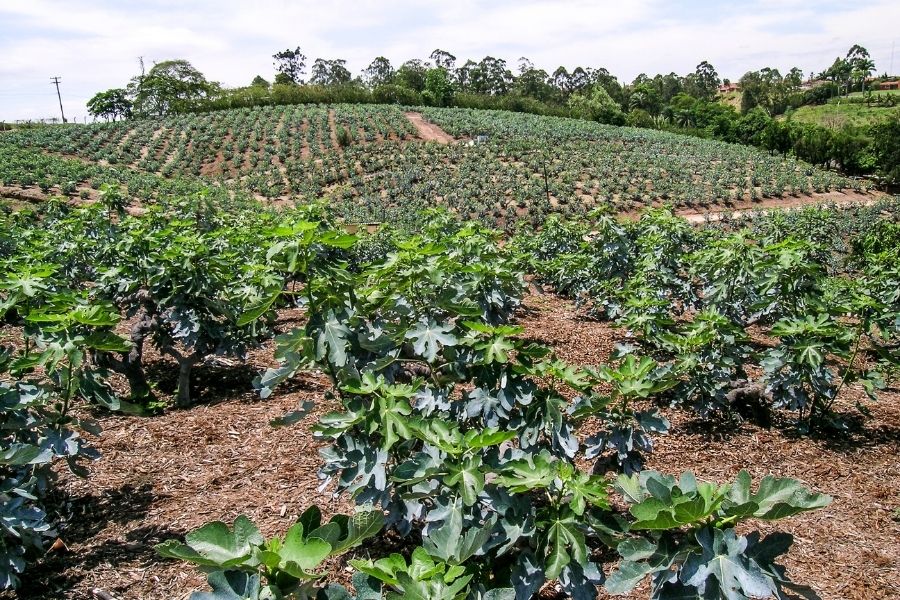 For example gophers can eat a lot of figs off a tree before anyone can spot them. Starlings pick holes in several fruits at once, looking for works or insects.

This results in some loss for the farmers, who then have to raise the price to make up for it.

The best figs are Black Mission and Brown Turkey

If you’re looking to buy the best figs, then you should look for Black Mission or Brown Turkey. These are the sweetest figs out there, and are fairly easy to find (as figs go). They also come at a higher price, but they’re well worth it.

You’ll notice Black Mission are smaller, and tend to look wrinkly and shriveled when ripe. Brown Turkey have a brown outer skin and are larger than Black Mission.

California figs are the most widespread in America

If you’re from America then you’re most likely to get Calimyrna figs. These are Smyrna figs that were brought decades ago, and have been named after California+Smyrna.

They’re the third sweetest fig in the world, and given that they’re grown domestically they’re going to be a little more reasonable in price.

How to pick the perfect ripe fig

Whichever fig you’re out looking for, you need to know a few things beforehand.

First, no fig is ripe when it’s perfectly smooth. As figs ripen they get soft, a little saggy and possibly develop fine wrinkles. You may think those are not what you want. Those are in fact what you want. Give them a try. This is especially true for Black Mission.

Second, even if you pick up an underripe fig don’t worry. Give it a couple of days on the counter and it will be perfectly good.

As long as there are no obvious cuts into the skin or there aren’t any ripped parts, the fig is fine. Not all figs are dark purple. remember that, Brown turkey is a brown-purple fig with a slightly green top. Don’t pass on those, they’re fine.

Calimyrna figs are green on the outside, and pink inside. You’ll know they’re good when they’re no longer smooth and shiny. Their outer skin should be matte, with something like a velvety, powdery finish going on.

In short, figs are a real treat. As long as you take the time to really look at what you’re buying, you’ll notice that each fig type looks a little different when ripe. Don’t skip out on figs when you see them in stores.

And if you’ve bought smooth ones, don’t cut into them just yet, Let them sit for a couple of days until their sugars develop more, they soften, and get a little bit wrinkly.