Have you ever wondered why there are so many onion varieties to choose from ? After all, they’re all just onions and they end up tasting mostly the same. Do the different colors bring subtle notes in each onion type ?

As it turns out, differently colored onions do have different flavors, though it’s not the pigment that gives the onion a different flavor. It’s more of a correlation that causality. Still, you can use color as a good indicator of what you should expect from a specific onion type.

Now let’s see why and how onions get their colors ! 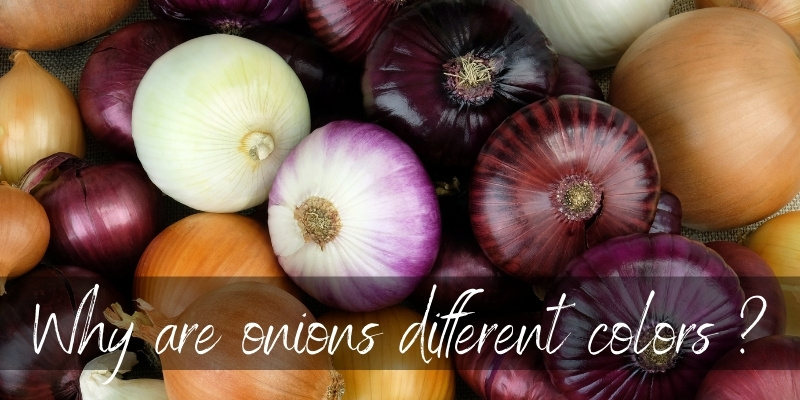 Table Of Content show
1 Why are onions different colors ?
1.1 Red onions and shallots have anthocyanins
1.1.1 Can you sautee red onions ?
1.2 Yellow onions
1.3 White onions
1.4 Green onions and leeks
2 Are purple onions better than white ?
3 Can onions be spicy ?
4 Why do chefs use shallots instead of onions ?

Why are onions different colors ?

Onions are different colors because of their natural pigments, and each onion variety has more or less pigment. For example red onions and shallots appear purplish-red because they are high in anthocyanin. Yellow onions have a very small amount of beta-carotene, while white onions have the least amount of pigment.

All onions have chlorophyll, a green pigment that aids in photosynthesis. It’s also why green onions and leeks are so green, white their bulbs (underground, shielded from the sun) are white.

Red onions and shallots have anthocyanins

Anthocyanins sound very vague, we know, but that’s the Latin name for ‘before’ (antho) ‘blue’ (cyan). If you’ve ever has red cabbage, beetroot, any sort of berry at all, they you’ve already encountered anthocyanins. It’s the same pigment that turns some broccoli and cauliflower types purplish-blue.

Read also: Why Are Onions So Strong ?

If you’re wondering what good they serve, anthocyanins are better at absorbing blue light, which is most prevalent in the morning. You’ll find that red onions, shallots, an red spring onions have anthocyanin.

Can you sautee red onions ?

You can sautee red onions, but be prepared for them to change color. If you add anything like a protein – such as beans or meat or tofu – they will turn blue. This is because proteins are basic food items, and when exposed to this anthocyanin turns blue. If you add back something acidic, it will turn back to reddish-pink.

Anthocyanin runs from blue to red, eventually turning black at its most extreme.

Yellow onions have a slight, very slight, amount of beta-carotene. Yes, the same pigment that carrots and red peppers have. Only they have a very small amount, and you will only notice it in the outer layers of the onion.

The largest amount of pigment is still chlorophyll in yellow onions. It’s just that it’s completely underground, so it does not develop. It needs direct sunlight to turn green.

White onions have no beta-carotene and instead only have chlorophyll. Just like yellow onions, they’re underground and cannot produce any color at all. 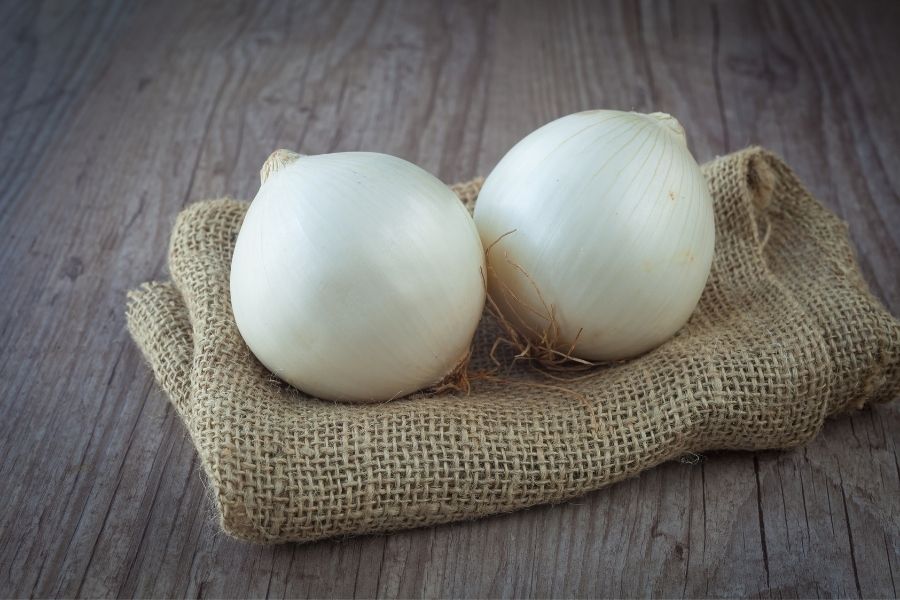 Because chlorophyll activates when exposed to direct sunlight, the leafy parts of onion will turn green. This is the case for spring onions, chives, leeks, and young shallots.

In fact, all green onions are simply immature onions. If you were to let the develop more, the bulb would grow larger, and once it’s cone growing the leaves will still be fully green. But they would be thick and chewy, not nearly as tender as fresh spring onions.

Are purple onions better than white ?

Purple onions (or red onions) are better if you need a raw onion. This is simply because this cultivar as more bite to it, and is a little spicier than yellow or white onions.

So for something like salads, or for pickling, it will end up better. If you’d like to sautee or caramelize red onions, you risk ending up with a bluish mess that would taste right but look very wrong.

Can onions be spicy ?

Yes, onions can be spicy. The amount of spiciness for each onion varies according to the soil it’s planted in. Higher sulfur content results in a sharp, flavorful onion.

To be more specific, each onion produces a compound called propanethial-S-oxide, which is also responsible for tearing up. This compound is what stings when the onion is still raw.

Why do chefs use shallots instead of onions ?

Each onion cultivar or type is different. Shallots are a type o onion that simply does not produce as much flavor and bite as a regular red onion. So, it ends up with a milder taste.

Aside from that, it resembles garlic flavor vaguely, and thus ends up as a lighter version of two very flavorful vegetables. Shallots are especially useful when cooking lighter meals or meats, such as chicken, fish, light veggies.

They’re also better in a sauce, since they won’t overpower the flavor of the rest of the ingredients. You can mimic this same effect by using smaller amounts of red onion, if you have no shallots.

And that’s pretty much it for why onions have different colors. Each cultivar was either developed by humans through selective breeding, or developed naturally. We’ve grown onions for thousands of years, so it’s more likely that each cultivar is a result of human direction.