If you’ve ever been to a grocery store you’ve definitely seen all the beautiful colors bell peppers can express. You can find them in colored sets, or buy dozens of your favorite color of bell pepper !

But why are bell peppers so many different colors ? Does this mean anything in regards to taste ? Are they different peppers or are they all the same ? Let’s take a look. 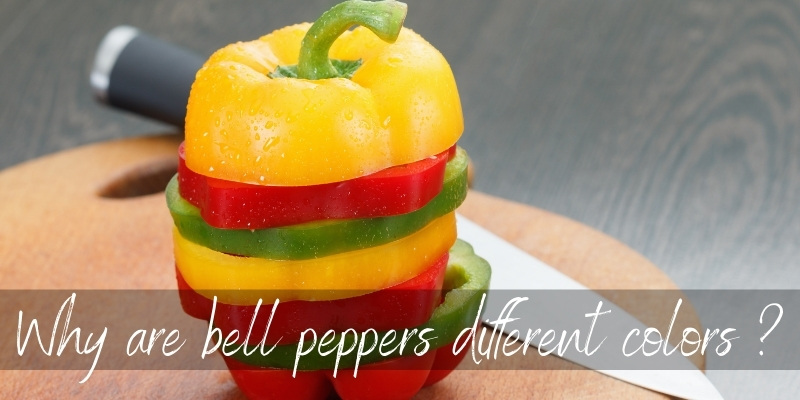 Why are bell peppers different colors ?

Bell peppers are different colors because they are sold at different stages of ripeness. This means that as a bell pepper matures, it goes from green to yellow to orange and then red. They are edible at any stage, as soon as they grow large and mature enough. This is why they’re sold in different colors: they’re at different ripeness from one to the other !

This is because as the bell pepper matures on the plant, it develops more and more pigment. Its pigment is beta-carotene, the same yellow-red one found in carrots.

The most standard version of bell pepper is the green, yellow, and red variety, commonly known as the Grossum cultivar. These start out green, and as they mature they turn red.

They’re not overly flavorful, unlike Kapia peppers which are deep red and elongated. You can find bell peppers of different colors, depending on what ripeness they’re at.

What about white and purple bell peppers ?

White and purple bell peppers are the result of selective breeding. For example white bell peppers are not truly white, they are instead a very light, greenish yellow. They produce a minimal amount of beta-carotene and appear nearly white as a result.

These are fully mature when ‘white’, and instead are a bit translucent when very young.

Purple bell peppers are actually a separate cultivar, and their purple hue is an indicator of being very young, and barely ripe. They can still be used in cooking, but are best used in their raw form. These peppers have more anthocyanin at first, which is what gives them that purple hue.

If you were to let them fully mature, they would eventually turn a reddish shade.

Most green peppers turn red if you let them sit on the plant long enough. This means that it will eventually go from green to yellow to orange and then red. There are some cultivars that remain green when they are fully ripe, since they produce no other pigment than chlorophyll.

You cannot turn a green pepper into a red one at home by ripening like you would bananas or avocados. 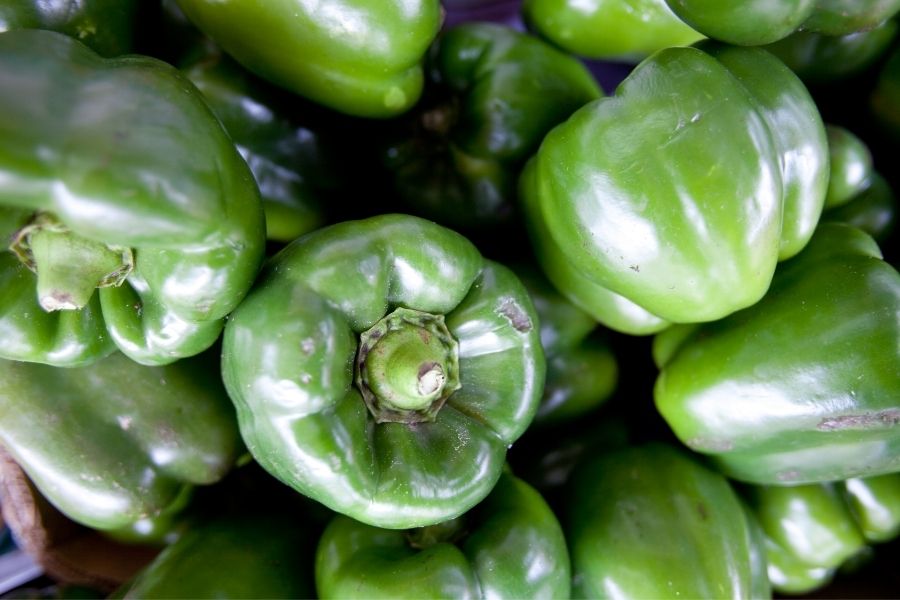 Does the color of a bell pepper matter ?

Yes, the color of the bell pepper you sue matters a lot, since it’s a very good indicator of its flavor, ripeness, and it can have a big visual impact.

Green bell peppers, along with the white and purple, have some of the most earthy, slightly bitter notes of all bell peppers. Pure green peppers are maybe less flavorful than the white ones, though this has to do with the cultivar more than the color. For example a red Kapia is more flavorful than a red California Wonder, simply because that cultivar has a stronger flavor.

The more colorful the bell pepper, the sweeter it is. So a yellow one will be less bitter and more sweet than a green one, and an orange one more so.

Finally, the red bell pepper is the sweetest. In some cases it can be as sweet as a carrot, and it will definitely stain the rest of the food a nice golden-orange hue.

This means that cooking with a red bell pepper will help you get a nice color in a stew, gravy, or anything at all. As humans we tend to go for the yellow-red-golden brown hues as the most delicious, in terms of food.

Why are green bell peppers cheaper ?

Green bell peppers are the cheapest of the bunch, simply because they can be harvested earlier than the other colors. This means that the production is quicker, and more can be sold.

For comparison, fully red bell peppers are more expensive because they need more time to ripen on the vine. They are sweeter, and thus consumers want them more.

To be fair though, the difference in price between fully ripe bell peppers and green ones is not that great, and most of the time you can find a three pack of all colors.

Read Also: Why Are My Stuffed Peppers Bitter

Yes, bell peppers are nightshades, just like tomatoes and potatoes and eggplants. This means that anyone with a general nightshade allergy should steer clear of these. In some people bell peppers may trigger a bowel movement, especially the younger, green bell peppers.

And that’s about it for bell pepper colors. As you’ve seen, it’s mostly about when each pepper is harvested, rather than a different cultivar. It’s nice to have variety in food, which is where that multi-colored pack comes in handy.