Is your cheese sweating ? For most folks this makes the cheeseboard look less appealing, so let’s try and figure out what’s happening here.

We’ll talk a bout why cheese sweats, if it’s really an issue, and what you can do about it.

Keep in mind that some cheeses are more prone to sweating or shining than others, so you may have to change the cheese. 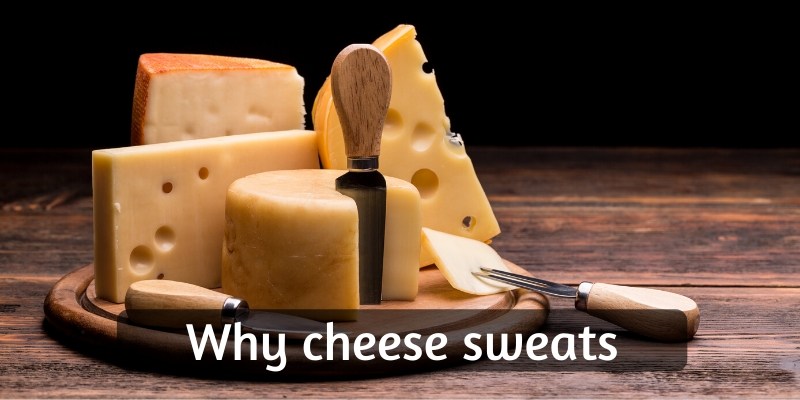 Table Of Content show
1 So why does cheese sweat ?
2 Is it safe to eat sweaty cheese?
3 Is it bad if cheese sweats ?
4 Can you stop cheese from sweating ?
5 What cheese sweats the most?
6 Final thoughts

So why does cheese sweat ?

For the most part, cheese sweats because it’s releasing moisture into the air. This happens when you’re keeping cheese at room temp for too long.

To be more specific, there are a couple of things that trigger this process.

This only happens if the cheese is in direct contact with the air, and not tightly wrapped or coated in a protective film.

Second, that moisture is actually the water found in the milkfats in cheese. If you think about how butter is made, a lot of moisture is released while churning.

This is that same moisture, and there’s nothing wrong with it. Aside from looking bad on the cheese.

Another thing that happens when the cheese sweats is that it starts to dry out, and if you leave long enough it will eventually darken and crack.

There’s no saving those dry pieces so it’s best to cut them off.

Keep in mind that sometimes, the cheese isn’t sweating. What you’re seeing might just be condensation.

If you kept the cheese in the fridge and it was very cold, and you take out and the room is kind of hot – like in a summer kitchen, for example – it might just form condensation on the surface. 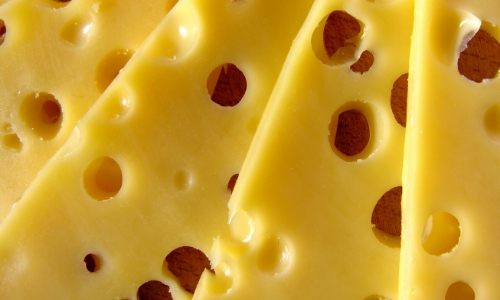 Is it safe to eat sweaty cheese?

Sweaty cheese is safe to eat most of the time. However, you need to be careful. If you leave cheese long enough to sweat and dry, parts of it will become moldy, especially if it’s partly covered with cling film or a wrapper.

If you don’t see mold or weird colored spots on your cheese you can eat it without the risk of getting sick.

Is it bad if cheese sweats ?

Not necessarily. It depends on what we’re talking about.

If we’re talking about how the cheese looks, then yes it’s bad. At least it’s bad for most folks who would like their cheese nice and dry, thank you.

But if we’re talking about a nutritional point of view, there’s nothing wrong with the moisture found on cheese.

Can you stop cheese from sweating ?

You can prevent cheese from sweating, but you can’t actively stop the process once it started.

You can prevent it by always, always keeping cheese tightly wrapped. Clingfilm is best here because it really sticks to everything.

It also helps if you keep your cheese as a large block/brick, because each slice lets some air in and it will start to sweat eventually. Only slice cheese when serving it.

Another way you can prevent cheese from sweating is if you’re keeping it in the fridge. This way the cheese stays cold, and you can take it out an hours or so before you want to serve it.

If you leave it on the counter for too long it may start to sweat.

If you’re wondering what you can do to stop the cheese from sweating once it’s already started, the answer is nothing. There’s nothing you can do because the process has started and there’s no stopping it.

But, you can always just blot the cheese with a paper towel to dry it up. 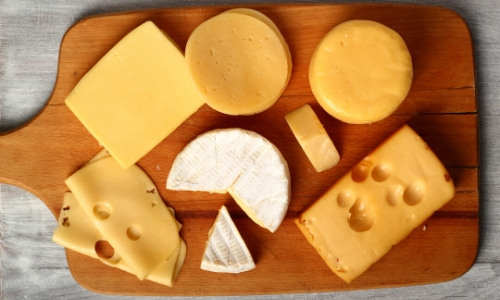 What cheese sweats the most?

Your best bet are hard cheeses. This is because hard cheese has a high fat content, but also a fairly compact, thick structure and any shine will stand out on it more.

Aged cheese is especially prone to sweating, no matter the milk used.

If you’re looking for the ones that are least like to sweat, you should go for soft cheese, or fresh cheese.

So examples such as Mozzarella, Camembert, Brie, any washed rind cheese (such as Taleggio, Limburger, Gryuere) and even blue cheese.

The point is that these cheeses have a lower fat content than hard cheese, but that’s not all. They’ve often been introduced to a lot of moisture beforehand so they won’t really show any shine.

Having your cheese sweat can be really weird at first, especially if you’re kind of new to cheese.

It’s best when eaten at room temp, but if you only leave it on the counter and forget about if for two weeks, it’s gonna sweat like crazy.

So you best bet is to eat it quickly, have a bunch of friends come over and enjoy it with you, or stick it in the fridge and only take it out when you want to have some.